A Fishing Connoisseur in a Fishy Competition 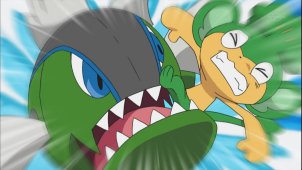 The episode starts off with Ash, Cilan, and Iris continuing on their journey to Nimbasa City. They notice everyone crowding around a certain area--naturally, all of them get curious. Ash was just about to go in and see what was going on, when he is suddenly knocked into a wall-enclosed river by Bianca, who apologizes, halting his attempts. Meanwhile after Ash was knocked into the water, a female Frillish notices him. While trying to dry his clothes with a fire, Ash asks her why she was in such a hurry. She tells him that she was going to enter a fishing competition. This convinces Ash, Iris, and Cilan to enter as well. Cilan becomes very ecstatic, exclaiming that he is a Fishing Connoisseur. During his Connoisseur lecture, he was picturing that he was fishing on a boat.

When they get there, Team Rocket (in disguise) is handing out the fishing rods and fishing Poké Balls. They say that the grand prize is a golden fishing rod, causing Cilan to get extremely excited. Bianca tries to choose a certain fishing rod, but Cilan explains that their is a better one more suited for the beginner fisherman. Cilan brings out what looks like a pen, and opens it up to show off his own personal Fishing Rod.

While everyone begins to fish, Bianca winds up her fishing rod but hooks onto Ash's jacket. Cilan had to unhook the rod after it got caught. Cilan begins to demonstrate the proper way to use the fishing rod. He explains to everyone that they must be patient waiting for the Pokémon to grab onto the line. When the Pokémon does grab onto the line, he explains that they must wait patiently for the Pokémon to full tug on the line and then reel it in. Cilan reels in a blue-striped Basculin which flops around in the water after being reeled in. Ash looks up Basculin in his Pokédex. Cilan reels Basculin to the surface ready for battle. He brings out Pansage for battle. Basculin uses Water Gun to knock Pansage into the water. Basculin uses Bite while Pansage tries to swim to the surface. Pansage tries to swim away while Basculin uses Aqua Tail. Pansage jumps out to use Bullet Seed and then Solarbeam to knock out Basculin. Cilan throws a Poké Ball to capture Basculin. Red-striped Basculin, Alomomola, and Blue-striped Basculin were battled and caught by other trainers. Iris tries to fish but becomes bored with it taking so long for a Pokémon to bite the line that she went into the water to grab a Pokémon herself. Iris grabs a Blue-striped Basculin and is both whistled and yellow carded by James.

Cilan hands in his Pokéball containing the Basculin that he caught and asks Jessie about when they get the results of the contest and what they will do with the Pokéballs handed in. Jessie explains that they will let everyone know the results later on. Bianca attempts to toss her fishing line into the water, this time a Pokémon grabs onto the line. Everyone tries to help her reel in the Pokémon, but Cilan had to step in and reel it out of the water. A female Frillish comes out of the water and uses Constrict on Ash and won't let go. Everyone tries to force the Frillish to let go, but they had no choice but to have Pikachu use Thunderbolt to send Frillish away back into the water.

Team Rocket grabs the Pokéballs and heads out to the boat to make their get away, but notice that the boat is getting away. A female Frillish moves the boat away from them. Everyone finds Team Rocket and realizes that the whole competition was fake and they were trying to steal all of the Pokéballs. Team Rocket calls out Woobat and Yamask, while Ash scans Yamask with his Pokédex. Pikachu uses Thunderbolt and Pansage uses Bullet Seed which Yamask blocks to protect Woobat. Pikachu uses Iron Tail on Yamask, and Pansage uses Bite on Woobat to defeat them. Everyone begins to notice that all of the Pokéballs are empty and that the female Frillish released them. Team Rocket gets away on their jet packs after Yamask uses Haze. Cilan searches for the golden fishing rod and realizes that it was broken and fake. Bianca tells them that she is going to the Desert Resort to train hard and leaves them. 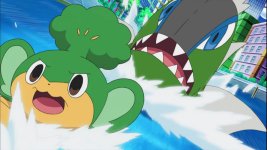 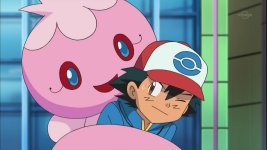