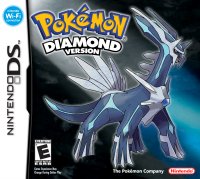 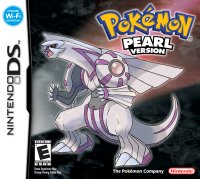 Pokťmon Diamond & Pearl are thre fourth Generation of Pokťmon games. Having come out for the new Nintendo system, the Nintendo DS, Diamond & Pearl makes use of the DS's many functions including TouchScreen and WiFi. Diamond & Pearl also brings back many features from Gold & Silver that have since been removed.

Bringing 107 New Pokťmon into the mix, bringing us to a total of 493 Pokťmon, including many evolutions of old Pokťmon, Diamond & Pearl completely overhauls the battling system. No longer are move's stats based on its type , but rather each move is individually allocated being Physical or Special.

Diamond & Pearl are set in the far off land of Sinnoh and have you playing as a Rookie trainer wanting to go through Sinnoh, beat the Gyms and become the best trainer. However, throughout your travels, you will encounter two rivals as well as the evil Team of the land; Team Galactic, whom are bent on obtaining the special legendary of your version.

Diamond & Pearl has over 400 Pokťmon obtainable within it, making it the biggest Pokťmon game to date. There are many methods to find the Pokťmon in the game; Inserting your GBA Game in for Wild Pokťmon, Swarms, The PokťRadar and the Pokťmon Mansion. However, this is not all as you are capable of transferring your teams from your GBA Versions through Pal Park, this is however one-way.

Diamond & Pearl also brings a whole new thing into the Pokťmon World; online battling & trading. Using the critically acclaimed Nintendo WiFi Connection, you are capable of sharing Friend Codes with your friends and battling with them. You can also trade with them across the WiFi Connection. Diamond & Pearl also have a Trading Station that allows you to put up a Pokťmon that you have, state what you want and have someone trade it with you. A very efficient system indeed.

Diamond & Pearl keeps all of the functions the games have had in the last Generation as well as introducing some new ones and reintroducing the Time Based events. It has a cool feature called the Pokťtch that allows you to keep up to date with all your goings on including Captures, Breeding, and the location of the fleeing legends.