The film begins with Shaymin by an oasis, as Dialga appears. He drinks from the water, before being attacked by Giratina from the Torn World, in Another Form. Giratina comes through a portal, grabbing Dialga and dragging him into the Torn World. Shaymin gets caught in a whirlwind and is sucked through the portal, too. Dialga and Giratina fight, while Shaymin tries to survive - unnoticed by the giants - the battle. A advenurous-looking man with a Shieldon watches the battles from afar, spotting Shaymin. There are also glimpses of a computer simulation observing the battle, on the ship of Zero. Zero is this film's villian, who seems to be watching Giratina with the aim of capturing it.

As the battle progresses, Shaymin absorbs a dark gas, and then explodes. The explosion causes a portal back to the real world to form, sucking Shaymin through. Dialga escapes through the portal, but it closes before Giratina can get through. Giratina keeps hitting the same spot over and over, in what the computer calls a "time loop". Dialga flies off and is not seen again in the film. Shaymin is thrown into a river, and goes out of control down a huge mountain to a small seaside town. We find Ash, Brock and Hikari in the town, with their Pokemon, enjoying Brock's cooking once more. Ash is scolded for not washing his hands before eating. As everyone is preoccupied with the Pokemon eating, a grey Shaymin starts eating "hot cakes" from the table. Piplup attacks Shaymin, causing a barbeque to be knocked over in the chaos. Shaymin absorbs the smoke and then explodes as before. Hikari saves Shaymin from being attacked by all the angry Pokemon, washing her under a tap. Its revealed that Shaymin can talk telepathically, and she talks of "ACHI" ("that place"), with irritates Ash as he can't understand. Shaymin teases Ash a lot about being stupid, but befriends Hikari.

They take Shaymin to a Pokemon center, where Brock hits on Nurse Joy until his Croagunk punches him and drags him away. Shaymin says she'll lead them to "ACHI", sitting on Ash's head and making him move where she wants to go as he complains. Team Rocket watch in the Pokemon Center, and decide to try to steal Shaymin. In a garden full of strange isometric and rectangular statues, the sides of some start to ripple and Giratina appears briefly. Team Rocket pick up Shaymin and run off, but are then sucked into a statue, which has become a portal to the Torn World. Everyone except Brock is sucked through, where Ash, Hikari, Pikachi and Piplup battle Giratina while rescuing Shaymin. Running from Giratina, they bump into the man who watched the earlier battle, who introduces himself as Mugen Graceland, a "genius scientist". Ash and Hikari comment on him introducing himself as a "genius scientist", and Shaymin mocks him. He leads them to a portal back to the real world, while explaining that Palkia and Dialga's battle (in the 10th film) caused a black smoke to fill the Torn World. This infuriated Giratina, explaining his attack on Dialga in the beginning of the film. Pikachu, Piplup, Shaymin, Ash and Hikari return to the garden, where Brock is waiting. Team Rocket appear too late, and are left behind with Mugen in the Torn World.

Back in the garden, Ash and Hikari attempt to explain about the Torn World and Giratina, but are stopped by the appearance of Magnemites and Magnetons. Zero comes down on a hover-board, with Magnezone as his side-kick. They disable the Magnemites long enough for them to flee into the streets of the town, chased by Zero's Magnemites, Magnetons and the Magnezone. Escaping onto a train leaving town, they talk with people on the train, and Shaymin tranforms into Sky Form when exposed to some flowers. It is explained that Shaymin transforms when exposed to special flowers found at the top of the mountain, where all the Shaymin live. It is decided to help Shaymin return home. The train is attacked by Zero's Pokemon, who are fought off by Pikachu, Piplup and Shaymin. Magnezone smashes the side of the train, but is repelled just before the train enters a tunnel, leaving all Zero's Pokemon to smash into the side of a hill.

On a boat, the group are going up a river to reach Shaymin's garden. They play around, and Shaymin teases Ash more, until Zero appears again. A portal opens in the water, sucking Shaymin and the others in, and Zero and his Pokemon follow. Ash, Hikari and Brock battle Zero's Pokemon, and find Mugen, who leads them into a cave. Giratina and Shaymin battle, until Shaymin's Sky Form trasformation wears off. He's saved by Pikachu on Staravia, who rejoin with the group. Shaymin causes another explosion by absorbing the dark gas, allowing them to excape, and Giratina and Zero follow. With everyone in the real world, a gigantic airship appears in the valley which Zero flies to with his Pokemon. Giratina changes to his normal form, and sits on the bank of the river. A gun from Zero's ship shoots Giratina, who flies up to attack the ship, but is caught in a giant trap that begins sucking Giratina's energy away.

Everyone except Brock board a hover-board and fly up to the ship, where they battle Zero's Pokemon, and Mugen enters the ship to disable to computer. It is revealed in a flashback that Zero used to be Mugen's pupil, studying the Torn World, until he became obsessed with Giratina's power and decided to catch and take his power. Mugen disables the computer and the trap, freeing Giratina who collapses unconscious inside the trap, but also accidentally turns off the ship's engines. The trap falls apart, dropping Giratina into the river, and the ship begins to come down. Everyone escapes on the hover-board, except Zero who stays on his ship. Just before the ship crashes, a smaller ship seperates from it. The larger ship crashes into the forest, as Pokemon flee from it. Giratina climbs out of the water, then drops down and seems to be dead. He starts to breathe gently, though, so everyone and all the Pokemon from the forest gather around. Shaymin heals Giratina, just before Zero reappears in his small ship. Giratina chases Zero through a portal into the Torn World, where Zero smashes towers of ice. In the real world, this disturbs a glacier on the mountain, which begins to slide down the mountain, toward the town. As Giratina and Zero fight, everyone tries to think of a way to stop the glacier destroying the town. The disturbance uncovers Regigigas' temple, awaking him and causing him to come out and stop the glacier, joined by a herd of Mamoswine.

Shaymin turns into his Sky Form and creates a portal, allowing Ash into the Torn World, where Giratina is being defeated by Zero. Team Rocket watch, admitting they would like to help but can't think how they could. Ash jumps on the ship and tries to persuade Zero to stop. He refuses, closing up his shields as a dark cloud covers everyone. Ash covers his face to protect himself, as Shaymin absorbs it all. The explosion opens a portal back to the real world, sucking the ship through. Zero refuses to let the ship return, however, until Giratina fires a ball of energy which shoots it through. Team Rocket and everyone is sucked through the portal, leaving the Torn World, with enough time to allow Giratina to leave. Zero's ship crashes down next to Regigigas, before it is covered in ice by Piplup and other Pokemon with ice beam. Everyone rejoices stopping the glacier, then find the Shaymin garden nearby. It is full of other Shaymin, who change form at will. Shaymin says goodbye, admitting she likes Ash really, and leaves with tears in her eyes. All the Shaymin turn into Sky Form, and fly away. Giratina is seen flying off too, to continue its attack on Dialga.

In the closing credits sequence, Zero's ship is recovered, and he is arrested by Office Jenny and helped out of his ship by Mugen. Ash, Hikari and Brock leave the town to continue their Pokemon Journey.

Giratinia & The Bouquet of the Sky 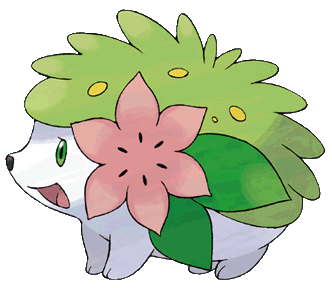