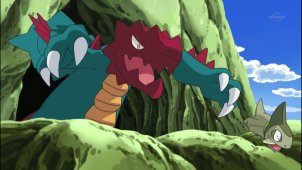 On their way to Nimbasa City, Ash and his friends are having a Pokémon battle in the field between Axew and Scraggy. Axew uses Scratch, while Scraggy dodges the attack. Scraggy uses Headbutt to hit Axew, as Axew holds his head in a lot of pain. Axew uses Dragon Rage, but the attack doesn't work and an explosion affects everyone. Cilan says that the Dragon "Sneeze" has a powerful and bitter taste. Iris says that it's not sneeze, but it is Dragon Rage. Ash says that Axew is doing his best, but the attack just won't work yet. Iris says that it takes a long time to raise Dragon Types, as she tells Axew that he will be able to use it eventually.

The bushes around them shake, as a Flamethrower comes after them and a Druddigon comes out from the bushes and roars. Ash scans Druddigon with his Pokédex. Iris says that Druddigon is powerful, cool, and the greatest, and a Dragon Type Pokémon. Druddigon uses Focus Blast, while Pikachu uses Electro Ball to block the attack. As they get ready to attack some more, Emmy steps in front of Druddigon. She tries to grab its arm, as Druddigon runs off. Iris sees a rope tied around the foot of Druddigon, and goes after it, as Ash and Cilan go after it as well. They follow it to some caves, as Emmy asks Iris where her Druddigon has gone to. Iris tells Emmy to be quiet, as she asks Axew to call for Druddigon. Axew climbs up the mountain walls, and goes inside of the cave that has Druddigon. Axew runs back out in fear, as the Druddigon angrily comes out of the cave and back down to where everyone is.

Druddigon roars, as Cilan says that it is agitated and dangerous. Druddigon roars again, as it winces in pain. Iris pats the Druddigon on the head, as she removes the rope from its foot. Iris shows everyone the rope, as she explains that it was tangled around its leg, and that Druddigon rampaged because of the pain. Emmy wonders how the rope got onto it, as she was picking Druddigon's favorite berries. She wonders who did it and why they did it. Emmy thanks everyone and introduces herself, as the others introduce themselves to her as well. Emmy says that it's impressive that Iris knew where Druddigon was. Iris explains that Druddigon become immobile when their body temperature falls, and with sunlight going into the top cave she knew Druddigon would be in there. Ash says that she knows a lot about Druddigon, as Iris says of course she does since she is from the Dragon Village.

Team Rocket watches Ash and his friends, as James comments that it is a shame that they failed to capture it and that the strength Druddigon used to escape was truly remarkable. Jessie says that it was a good decision to continue observing and to target it for capture, as she is glad that it joined Ash and his friends for now. Meowth says that they will also get Axew and Pikachu as well. Meanwhile, Pikachu and Axew are playing on Druddigon's tail, as Emmy talks with Ash and his friends. Ash asks Iris if she had said that her hometown is a leisurely place where a lot of Dragon Type Pokémon live. Iris says that everyone gets along well with Pokémon, as she says that the Dragon Masters are the coolest ones. Cilan explains that Dragon Masters have the ability to attune their heart to Dragon Types, and raise their power to the maximum. Iris nervously says that her dream is to become a Dragon Master, as she blushes while saying it. Emmy says that it must be why Iris knows so much about Dragon Types.

Emmy asks Iris to teach her about Druddigon, as she admits that she has only just started out as a Pokémon Trainer. She says that her father traded Druddigon to her but since it is the first time she is raising a Dragon Type, she decided that she will travel once it gets used to her a bit more. She says that she has trouble deciding what to do. Iris says that she is going to do whatever she can to help her. Iris suggests that Emmy have a Pokémon battle to get used to working with Druddigon, as she asks whether Emmy has had a battle before or not. Emmy says no, as Cilan says that it is a good way for them to understand each other. Ash decides to be her battling opponent. Ash chooses Tepig to battle Druddigon.

Druddigon celebrates, as Emmy thanks Iris for her help. Iris says that it is very hard to become in sync with a Dragon Type. She says that it is important that they trust each other, and that they be patient. Tepig is able to get up after the battle and is in high spirits, as Ash returns him to his Poké Ball. Cilan recalls that Druddigon knows Flamethrower, Dragon Claw, and Focus Blast, as Iris asks her if it knows any other moves. Emmy says that right now, those are the only moves that Druddigon knows. They say that if Druddigon learns another attack, then the options in battle would become broader. Emmy tells Druddigon that they have to do their best.

From on top of the cliff, Yamask launches a Shadow Ball at everyone. Cilan wonders why Yamask launched a Shadow Ball without warning. Yamask again tries to hit them with Shadow Ball, as they are able to dodge the attack. Druddigon tries to use Flamethrower, but Woobat comes from behind it and uses Gust on them. Axew and Pikachu are blown off of Iris and Ash's shoulders, as they are grabbed by a machine. The machine also grabs the Druddigon. Druddigon uses Dragon Claw to try and free them, but is only able to cut the rope that is around Pikachu. Axew and Druddigon are pulled up to the flying ship, and are put into a large box as the door closes behind them. Team Rocket appears out of the roof and recites their motto. Ash tells Emmy that Team Rocket are bad guys who steal other people's Pokémon.

The ship begins shaking, as Druddigon is using Dragon Claw to try and break through the walls of the cage. James says that it will be fine, since the machine is perfect. Meanwhile, Ash and his friends continue to chase after Team Rocket, as Emmy says that Druddigon is her friend and that she will get it back for sure. Iris says that her Axew is precious, as she recalls the day that she received Axew. The Matriarch says to Iris that with Axew, she will meet many Trainers and Pokémon. She says that those meetings will be food for her growth, and that there are many things waiting for her as she goes on her journey. She says that there will be sad, happy, enjoyable, and painful moments on her journey. She says that when they overcome them together, her road to become a Dragon Master will be opened. Iris says that they will do their best.

Iris says that they will do their best to overcome them, and become a Dragon Master, as everyone speeds up to try and catch up to Team Rocket. Meanwhile, Druddigon continues to try and break through the door of the cage, but becomes to tired to keep hitting the walls. Axew uses Dragon Rage, which fails but breaks the engines of the ship and sends them towards the ground. Ash and his friends watch the ship crash to the ground. Once they crash to the ground, Meowth comments that they thought Axew couldn't use Dragon Rage. James says that Axew is perfect for them. Druddigon and Axew break through the door, and finally are able to escape the cage and try to get away. Jessie says that the Pokémon are trying to escape, but it won't work.

Meanwhile, Iris tries to find another way to get to where Team Rocket and their Pokémon are, by listening for the Pokémon's voices from the top of a tree she is standing on. She closes her eyes and hears them, as they are being cut off and surrounded by Woobat and Yamask. Iris figures out which way to go to get to them, and heads towards that direction. Cilan thinks that she was going the wrong way, but Ash says that she could sense where Axew and Druddigon are, and that he trusts her to lead them into the right direction. Ash and his friends follow behind Iris to where Team Rocket and the Pokémon are at. Axew and Druddigon continue to run away, as they slip down a mountain, but are both okay after landing. Team Rocket cuts them off and prepares to attack them.

James says that they can't escape from them. Meowth tells them to give up and become their companions. Druddigon uses Focus Blast, but Team Rocket dodges the attack with ease. Jessie says that she likes Druddigon's strength even more now. Yamask uses Shadow Ball, as Druddigon blocks the attack. Woobat uses Gust on both of them, as Meowth says that they should join Team Rocket so that they are able to take over the Unova Region. Ash and friends show up, as Ash says that they won't let Team Rocket keep the Pokémon. Iris and Emmy are glad that Axew and Druddigon are safe, as they try to go towards each other. Yamask uses Shadow Ball, but Pikachu hits them both with Thunderbolt before the Shadow Ball can be launched. Druddigon and Axew run to their trainers, as Yamask uses Night Shade on them. Druddigon holds Emmy to protect her from the attack, as the Night Shade sends them hard to the ground. They are both fine, as Emmy thanks Druddigon for protecting her.

Druddigon's body glows orange, as it begins to learn Draco Meteor. Iris says that with the attack, the Pokémon charges their entire body, and then releases the attack into the sky. Emmy tells Druddigon to fill its body with more power, as it does so. She tells Druddigon to then release it to the sky, as the attack crashes down on Team Rocket and their Pokémon. Team Rocket becomes even more excited about catching Druddigon now that it knows Draco Meteor. Woobat uses Gust, while Pikachu hits it with Electro Ball. Axew charges up Dragon Rage, as it finally becomes the full attack and makes contact with Team Rocket, creating an explosion. After the attack, everyone is excited that Axew finally mastered Dragon Rage.

Team Rocket gets away in their jet packs, as James says that Ash and friends were annoying for interfering at a crucial time. Jessie says that this time they failed, but they will achieve their goals eventually. Meowth says that they will definitely take over the Unova Region. Iris hugs Axew, and tells him that she is so happy that he finally mastered Dragon Rage. Cilan says that after a lot of ripening, Axew is showing a powerful and soulful taste and that it was an excellent Dragon Rage. Ash says that Druddigon's Draco Meteor was amazing as well. Emmy thanks them, and says that she is planning on beginning a journey together with Druddigon, as they hug each other. Iris says that she will also have to do her best in order to become a Dragon Master. Ash says that he won't lose either, and will some day become a Pokémon Master. 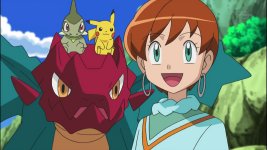 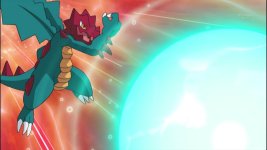