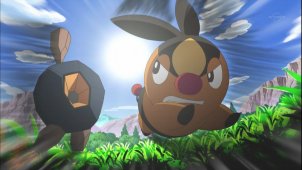 The episode begins with a Roggenrola inside of a cave heading outside towards Ash and his friends. Ash and his friends are enjoying a meal, along with their Pokémon. Ash compliments Cilan on the pie he made. Cilan says that he mixed in fruit from the forest into the pie, and that he thinks that made it taste natural and fresh. The Roggenrola from before jumps onto the table, and knocks the food away. Cilan is very upset that Roggenrola ruined everything he worked hard to prepare. Roggenrola tries to communicate with them, as Ash scans Roggenrola with his Pokédex. Ash says that Roggenrola has a lot of nerve to be ruining their lunch. Ash decides to catch Roggenrola, as he brings out his Oshawott. Oshawott uses Water Gun, but Roggenrola flips up a pan to use for sending the attack back at Oshawott. Oshawott uses Aqua Jet, as Roggenrola dodges the attack. Oshawott lands hard on the table and is knocked out. Cilan notices a suction cup on Roggenrola's back. Ash returns Oshawott to his Poké Ball and brings out Tepig for battle.

At the Pokémon Center, Ash and his friends wait anxiously for Tepig and Oshawott to be okay, Nurse Joy comes out, and says that Tepig and Oshawott have fully recovered. Mr. Garrison walks in and tells Nurse Joy that there are no issues with the equipment, and that the cause must be the waterway or the spring. Nurse Joy explains to them that the condition of the water supply has been strange since this morning. She says that she asked Mr. Garrison from the water department to take a look at it. He says that if the problem is the spring, then something must be happening at the cave. He explains that the water supply at the Pokémon Center relies on spring water from the cave. Nurse Joy says that many Roggenrola live in the cave. Iris wonders if the Roggenrola they saw earlier was one from the cave. Mr. Garrison asks if they've met a Roggenrola. Nurse Joy says that Roggenrola rarely go outside, as she wonders if something has happened. Cilan thinks that the Roggenrola from before was trying to tell them something, and that something strange was attached to its back. Everyone decides to check out the cave, as Mr. Garrison says not to do anything too dangerous.

In the forest, Roggenrola tells Blitzle, Darumaka, Deerling, Venipede, Patrat, Minccino, and Pidove about the dangers in the cave. In the caves, Roggenrola are trying to run away, but the Team Rocket machine grabs them. Meowth says that their plan is going well. James says that Dr. Zager has made a new weapon that has destructive power, and that Roggenrola are very important for it. They say that if they collect Roggenrola, then they will be able to take over the Unova Region. Ash and his friends arrive at the cave, as Mr. Garrison notices that the spring has dried up. The Roggenrola from before shows up to lead Ash and his friends inside of the cave. Ash and his friends enter the cave and go after Roggenrola. As they go deeper into the cave, they see a big pile of rocks that is blocking the water supply.

Team Rocket uses their machine to create a rock slide, as the rocks begin to fall. A large rock heads towards Ash, as Roggenrola uses Flash Cannon to destroy the rock. Ash thanks Roggenrola for saving him. Ash says that he'll never forgive Team Rocket for doing this. Team Rocket heads outside, as they notice on the computer graph that there is a high-intensity energy core in Roggenrola's body. Meowth says that with the new system created by Dr. Zager, they can condense and amplify it. Jessie says that the name of it is the Roggenrola Cannon. Team Rocket powers the machine up, as they target and launch a combined high powered Flash Cannon at the entrance of the cave. As it hit the cave, a bright light shines in front of Ash and his friends. As Roggenrola looks on, rocks start falling from the ceiling. Ash tells Roggenrola to watch out, as he grabs it and gets away from the large falling rocks. Outside, the rocks have gathered in a big pile in front of the entrance to the cave. James says that the destructive power exceeds expectations, as Jessie says that the experiment was successful. Team Rocket drives far away from the cave.

Everyone was able to avoid getting crushed from the rocks. Mr Garrison says that using the core energy of the Roggenrola is unforgivable, and wonders how they will be able to get out of the cave. Iris bring out Excadrill and Cilan brings out Pansage to use Dig, so that they can get out of the cave. Once they get out of the cave, Ash wonders where Team Rocket went off to. Roggenrola hops down the path, turns around and tries to tell everyone to follow it. Mr. Garrison comments that maybe Roggenrola knows where its friends have been taken, since Roggenrola are very sensitive to sounds. Ash and his friends follow Roggenrola, as they head towards the warehouse building. Inside, Team Rocket is checking that everything is working fine. James says that the Roggenrola Cannon is finally finished. Jessie says that the day Team Rocket takes over the Unova Region is coming closer. Ash says that he won't let them do it. Team Rocket wonders how they were found, as Ash says that the Roggenrola brought them to Team Rocket. Iris says that she will never forgive them for using the Roggenrola for their evil schemes. Jessie brings out Woobat to attack everyone Woobat uses Gust, which hits everyone. Tepig uses Ember, as Woobat dodges a few of the Embers, but is hit with the last one.

At the Pokémon Center, all of the Pokémon have recovered. Everyone is glad that they are all okay, as Ash thanks Nurse Joy. Mr Garrison says that he has informed the water department about the situation at the cave, and that they will begin the restoration process right away. He says the same thing will happen for the Roggenrola. The Roggenrola from before walks to the door, and asks them to follow it as it makes its way outside. As they get onto the field, Cilan explains that Roggenrola wants to battle Ash. He says that Roggenrola wants to go with him. Ash decides to battle it with Tepig. Iris is surprised, as she says that Tepig has a type disadvantage against a Rock Type like Roggenrola. Ash says that since Tepig lost before, that is why it would want to battle Roggenrola once more.

Tepig uses Tackle, but Roggenrola uses Sandstorm to keep him back. Roggenrola uses Stone Edge to hit Tepig, as Iris says that Stone Edge is super effective. Iris thinks that Ash can't get it with Tepig. Cilan says that the battle has a slightly bitter taste. Roggenrola uses Flash Cannon and Tepig uses Flame Charge, as both attacks collide and sends them backwards. Ash says that he expects nothing less from a Sturdy Ability. Tepig and Roggenrola use Tackle on each other many times, as Cilan says that it is a battle of willpower vs willpower. He says that they are competing by using their respective tastes. Roggenrola and Tepig use Tackle one more time, as both Pokémon are sent backwards. Roggenrola flails on its back, as Ash throws a Poké Ball to try and catch it. Everyone looks on, as the Poké Ball shakes and finally Roggenrola is captured. Ash, Pikachu, and Tepig celebrate their capture. 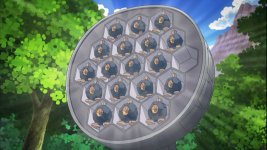 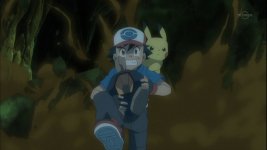