Archeops in the Modern World 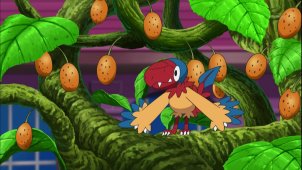 The episode starts off with the gang in a building somewhere on the way to Nimbasa City. Professor Juniper is showing Ash, Iris, and Cilan a plume fossil and tells them that the ancient Pokémon Archen came from this fossil, immediately interesting the group--that is, everyone except Iris, who think it looks like a rock. Ash recalls Nacrene City's Gym Leader Aloe and her fascination with fossils as well. Professor Juniper slips slightly and tells her everyone has their own opinions. She shows Ash, Iris, and Cilan a picture of Archen, and Iris comments that if Archen is the "First Bird Pokémon" then it must be Tranquill's great-great relative. The group continues to read the manual as Professor Juniper looks over at Fennel, who is on the computer. The fossil is placed in a machine that is powered by Musharna's Dream Smoke. The machine is then activated, scanning the fossil and then creating Archen. After the machine stops, they open up the machine and find Archen. A seed seems to fall off of Archen's plumage. Initially, Archen tries to fight off Ash and friends, confused and using Peck on everyone. Ash attempts to calm down the Archen but instead they run right into each other. Archen wears itself out and falls asleep. Professor Juniper brings out her camera and starts filming the Archen. Meanwhile in another location, Team Rocket is listening in on the action while planning how they are going to try and capture the Archen. Archen wakes up and starts crying, as the seeds that appeared when Archen was revived started growing and sprouting. Archen's cries shatter windows. Ash grabs Archen trying to calm it down, after of which it does. Ash attempts to feed Archen, but it spits it out and escapes through the broken window and into the trees outside. Archen spits out the tree's fruit as well.

Ash brings out Tranquill to help teach Archen to fly while Iris brings out Emolga to help but she uses Attract, which fails indicating that Archen is indeed a female. Instead of helping Archen, Emolga uses Volt Switch to force Stunfisk to come out who then uses ThunderShock. Archen uses her cries again while the sprouting seeds start growing even more, turning into a tree. While learning to fly, Archen starts to fly for short distances. Archen cries out in happiness causing the growing tree to grow even larger breaking the machines, and going right out of the window. Archen climbs up the new tree to eat the new fruit, and ends up liking that fruit. Archen cries out in delight and evolves into Archeops. Archeops shows that she can fly to everyone, then all of a sudden, Team Rocket strikes. Team Rocket has Yamask use Night Shade and set the tree on fire while they try to get away. Ash brings out Roggenrola and Oshawott to put out the fire. Team Rocket uses an electric net to capture the Archeops, which enrages her, using DragonBreath to break free and attack them.

After Team Rocket gets away, everyone looks at the tree which was now completely destroyed. Archeops begins crying out and a flock of Archeops hear her cries and come to her. Everyone says their goodbyes to her and the flock flies away. Professor Zager informs Team Rocket that even though they failed to capture Archeops, they were able to obtain all of the data that was needed. 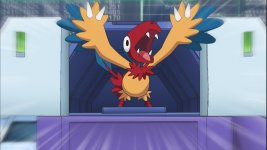 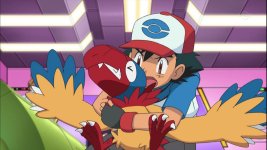