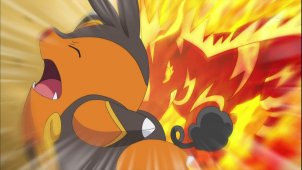 Ash and his friends head off to the Nimbasa City Gym to battle the Gym Leader Elesa. As they arrive in front of the Gym, Bianca comes running towards them and knocks Ash into a fountain. Ash and Pikachu yell at Bianca for running into them again. Bianca tells Ash that she has come to have a Gym battle at the Nimbasa Gym. Ash tells her that he was about to enter the Gym as well and that he is going first. Bianca tells him that she has a reservation. Cilan says that they should let the Gym Leader decide who goes first. Bianca says that Elesa is a charismatic model. She shows them a magazine with Elesa on the cover and says that girls admire her. Bianca says that Elesa is not only a Gym Leader, but a super-popular model. Bianca tries to enter the Gym, but the doors will not open. On the wall there is a sign, as Ash reads that it says that Elesa is absent because she is at a fashion show. Bianca flips through the magazine and sees that the fashion show is nearby, as she says that she is lucky to be able to watch a fashion show. Cilan suggests that they go to, since it would be a good way to find out what type of person Elesa is.

At the fashion show, Elesa walks down the runway with many different types of clothing, with people in the audience taking pictures of her. Iris says that she is even more pretty than before. Elesa hears Pikachu's voice, as she looks over and says that seeing Pikachu is making her dizzy. Elesa jumps over to Ash and his friends to admire Pikachu, as she says that she has never seen a real Pikachu before. She says that Pikachu is shining and sparkling, and asks Ash if Pikachu belongs to him. Ash and his friends introduce themselves to Elesa. Bianca tells Elesa that she went over to the Gym, but it was closed, as Ash says that he came to challenge her as well. Elesa tells them to meet her at the Gym after the fashion show.

Ash and his friends enter the Gym doors, as they see a cart for a roller coaster. Cilan suggests that they may have to ride it to get to the battlefield. Bianca explains that the guidebook says that they have to ride the roller coaster to get to the battlefield. Ash and his friends get into the cart and ride the roller coaster, as Cilan comments that he expects nothing less of an Electric Type Gym Leader. Elesa meets them at the end of the roller coaster ride. Elesa welcomes them to the Gym and apologizes to Ash for startling him at the fashion show. Bianca asks Elesa to have a Gym battle with her, as Ash is upset that he didn't make a reservation as well. Elesa decides to have a Gym battle with Bianca first. Elesa tells her that she has someone waiting for her.

The doors open as a man appears. Bianca recognizes him as her father. Bianca asks him why he is at the Nimbasa Gym, as he says that he is there to pick her up. He explains that even though he gave her permission to go on her journey, he regretted letting her go because he felt it was too early for her, so he came to pick her up. Bianca tells him that she does not want to go home yet, since her goal is to enter the Unova League. Her father says that he's not telling her to give up, but that it is too early for her. She tells him that she won't go home, and that she wants to continue travelling. She says that she will continue travelling and having Gym battles. Bianca asks him if he traveled and had Gym battles as well. He explains that it is why he is worried, and that journeys are always filled with danger. She says that she wants to continue traveling. Elesa suggests to Bianca that she use the Gym battle with her, to let him see how much she has grown since she began traveling. Her father tells her that if she loses, then she will return home. Bianca accepts the condition, that if she loses then she will end her journey and return home. Ash asks her if she is really okay with that.

They enter the doors to the battlefield, as Elesa's fans are in the stands cheering for her. Elesa says that it isn't just a Gym battle, but a show in which trainers present everything that they've got. The referee says that it is a 3-on-3 battle, and that only the challenger may switch Pokémon during the battle. Elesa brings out Zebstrika, while Bianca brings out Shelmet. Cilan tells Ash that it is a Shelmet, and thinks that she may have only got it recently. Ash scans Shelmet with his Pokédex. Shelmet uses Acid and Zebstrika dodges the attack, as Bianca notices that it's fast. Elesa asks Bianca if its speed makes her dizzy. Shelmet uses Energy Ball, but Zebstrika dodges the attack. Zebstrika uses Flame Charge, which hits Shelmet and sends it flying. Zebstrika uses Double Kick to send Shelmet close to the ceiling, and hits the ground while getting knocked out. Ash says that at the rate Bianca is going, she will have to go back home.

When everyone is outside of the Nimbasa Gym, Bianca's father praises her for doing well in the Gym battle, but he still plans to take her home. Bianca asks him to wait, since she needs to check on her Shelmet. Shelmet's face is purple, and it is very sick after the battle. Iris gives Bianca to give Shelmet some medicinal plants in a bottle to drink from. Shelmet drinks it and starts to feel better, as Bianca thanks Iris. Bianca's father says that it's time to go, as the others look very sad about Bianca having to go home. Elesa suggests that they go to the Pokémon Center, since she wants to let her Zebstrika heal as well. Bianca gives her Pokémon to Nurse Joy to take care of, as Cilan says that he is going to cook a meal.

Bianca gets her Pokémon back, as she is glad they are all okay. Everyone likes the food and drinks, as Bianca explains that she has gotten used to Cilan's cooking and that it is very close to a professional's cooking. Cilan tells them that he stir-fried potatoes, tomatoes, and peppers and put them in the sandwiches that they are eating. He also added a bit of mustard to the sandwiches as well. After they finish eating, Bianca's father tells Bianca that it is time to go home, as Bianca is very sad about it. Iris asks Ash to try and convince Bianca's father to change his mind.

As they walk away, Ash stops him and asks him to let Bianca to keep traveling since she really wants to. Bianca's father explains that with the Pokémon being stolen from the Pokémon Center recently, and is worried that she may get into trouble like that as well. He says that if she waits until she has better judgement, he wouldn't think it's too late to start out on a journey again. He says that he doesn't want to deny her a journey altogether, since coming in contact with Pokémon makes trainers grow up as well. He mentions that Bianca is very clumsy, which is why he wants to wait until she has become a bit calmer before letting her go out on a journey. Ash is very convinced so he sits back down, as they walk away. Iris says to Ash that he tried to convince her father, but somehow her father convinced him. Cilan suggests that Ash challenge him to a Pokémon battle, since Bianca's father used to travel as well when he was younger. Ash walks up to Bianca's father and asks him for a Pokémon battle, and asks that if he wins that he would let Bianca continue on her journey. Bianca's father asks him where he is from, as Ash tells him that he is from Pallet Town. Bianca's father says that Ash will have to return to Pallet Town if he loses, then he will accept the challenge for a Pokémon battle. He says that if Ash is confident in winning, then he should be able to do anything. Ash accepts the conditions of the battle, and asks him to let Bianca continue traveling if he wins. Elesa volunteers to be the referee. Iris wonders if Ash is okay with making that promise to Bianca's father.

Back at the Gym, Bianca's father and Ash are set to begin their battle. Bianca's father says that Ash has a lot of guts for challenging him. He takes off his suit and has a scarf on his neck, as he tells Ash that he used to be called the "Red Meteor" when he was younger. He brings out his Darmanitan, as her calls it Red Flash while bringing it out. Darmanitan is shown in its Zen Mode form, before it comes out into its regular fighting form during the battle. Everyone notices that he changed, as Bianca says that he is always like that when he battles. Oshawott comes out of its Poké ball, wanting to battle as Ash chooses him. Darmanitan uses Flamethrower to hit Oshawott. Oshawott uses Water Gun, while Darmanitan dodges the attack. Oshawott uses Tackle, while Darmanitan uses Fire Punch to send him flying.

Oshawott uses Aqua Jet, while Darmanitan uses Flare Blitz as both attacks collide creating an explosion. As the smoke clears, Oshawott is shown to be knocked out. Ash goes to the ground and is very upset that he lost, since it means that he has to go back to Pallet Town. Iris asks if it means he has to go back home, as he snaps at her for bringing it up. Bianca's father tells them that journeys may be full of danger, but his battle with Ash made him remember the fun he had while traveling. He tells Ash that he will become stronger on his journey. Bianca's father tells Bianca that she should continue on her journey as well, and that with Ash and his friends, she will become stronger. Bianca tells him that she will become stronger. Bianca hugs her father and tells him that she loves him. Bianca thanks everyone for their help.

Bianca says that she will be training in the Resort Desert, as she runs through the doors of the Gym. She comes back and says goodbye to her father. Her father says she is always like that, which is why he always worries. Iris points out that Bianca left her bag on the field, as Bianca's father runs to go grab it and runs after Bianca to give it to her. Everyone is glad that both Ash and Bianca can continue on their Journeys. Elesa tells Ash that they will have their Gym battle the next day, as Ash is very excited. 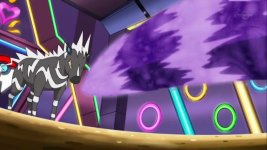 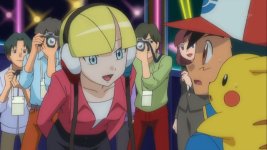