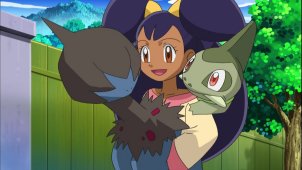 En route to Driftveil City, Ash and his friends are having a practice battle between Swadloon and Stunfisk. Ash commands Swadloon to use String Shot but out of nowhere the battle is halted because a Deino uses Dig to disrupt the battle. Ash scans Deino with the Pokédex. Iris excitedly says that Deino is very cute and wants to capture it. The Deino uses Headbutt on Iris. They look over and notice that another Deino is also in the vicinity, and that they are eating their food. Ash becomes very angry about it and has Pikachu go after them and have Swadloon stop them with String Shot. The Deino cause even more trouble, one Deino steps on Stunfisk making it cry, another headbutts Ash. Iris and Ash decide that they want to try and capture the Deino. Pikachu attacks with Electro Ball, while Axew attacks with Dragon Rage which knocks them out. Ash and Iris throw their Poké Ball to attempt to capture the Deino, however the Poké Balls simply bounce off and don't react meaning the two Deino already have trainers. Suddenly a man named Bobby runs up to stop the battle and explains that he runs the Pokémon Day Care center and that the Deino ran off.

Upon their arrival at the Pokémon Day Care Center, Ash, Cilan, and Iris see several different Pokémon playing around. There were Darumaka, Cottonee, Blitzle, Ducklett, Minccino, Pidove, Lampent, Foongus, and Swanna. The two Deino start playing around and Headbutting each other. Bobby meanwhile was fixing the fence that the Deino broke. While they were feeding the Deino, Bobby tells them that he could use some help feeding the other Pokémon. Ash, Cilan, and Iris volunteer to help him out. Axew and Pikachu hear another Deino's cries and go over to the bush it was hiding in and try to get it to come out of hiding. Iris notices the Deino and also tries to get it to come out from hiding, but the Deino is too afraid and very shy. Iris becomes determined to help the shy Deino, and tells Bobby that she will do whatever she can to get it to come out, eat, and not be shy anymore.

Bobby brings out a cart that is full of Pokémon food boxes, and explains to everyone about which food goes to which Pokémon and that they must follow the chart very carefully. They go around feeding all of the Pokémon. Pidove go after Ash trying to get to the food, and Ash plays keep away with the Ducklett's food. At the end of the day, everyone is aching and sore, while Bobby shows off that he is not sore at all and that they will continue the work the next day. While two of the Deino were being fed, Cilan notices that Iris is still trying to get the shy Deino to come out and eat. Axew pushes the Pokémon food toward the shy Deino, but the Deino wouldn't come out. Meanwhile, elsewhere Team Rocket and Dr. Zager were planning their next scheme.

While Ash and Cilan were both sleeping, Iris was still trying to convince the shy Deino to come out. Ash and Cilan go over to check on her, and she explains to everyone about a time in the Dragon Village cavern, a Druddigon was enraged for an unknown reason, chasing Pokémon such as Fraxure away. A dragon master watched and talked to the Druddigon for days, not doing anything else and eventually she approaches the Druddigon trying to calm it down. The Druddigon calms down. The next day everyone was again feeding all of the Pokémon. One Deino and Ash's Scraggy were headbutting each other for practice. Dwebble and another Deino were also attacking each other for practice. This time Iris attempts to hand out a piece of Pokémon food to the shy Deino, and slowly it comes out to try the food. Iris pets the Deino while it no longer is shy towards her and eats the food as well. Cilan and Ash come to check on her and find out that Deino finally was eating and opened its heart to Iris.

Two trainers arrive at the Pokémon Day Care Center to pick up the two Deino that weren't shy. Bobby tells them that they became much stronger. Unfortunately the shy Deino's trainer did not come yet. That night Iris explains to Ash and Cilan that she wants to stay a few more days and wait for Deino's trainer to return. Iris decides to train with the Deino until the trainer returns. They train all day long while Ash, Cilan, and Bobby feed the other Pokémon once again. That night a rapping trainer arrives to take his Pokémon. At first Iris thought that he was Deino's trainer and begins to yell at him for taking so long. The trainer explains that he is actually there to pick up his Foongus. Iris asks Deino if it wants to come with her on her journey. Later on, Deino's real trainer arrives to pick it up. He explains that he got lost in Chargestone Cave. With a sad expression Iris says goodbye to Deino as its trainer returns it to its Pokéball. Deino also says goodbye to Iris.

Team Rocket goes to an island and finishes their plans for a scheme they are doing on the island. 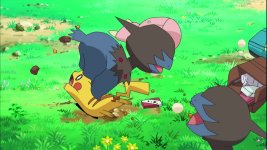 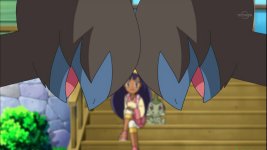