The Mighty Accelguard to the Rescue! 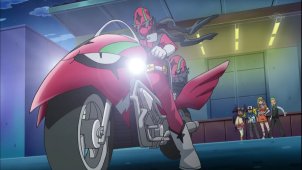 Ash and his friends head outside of the subway system and towards Driftveil City. A truck with a Vanillite with a No symbol painted on it passes them by. Ash is psyched for his gym battle at the Driftveil. They walk towards the gym to speak with Clay the Driftveil gym leader. Clay tells Ash that he doesn't want to battle right now. He explains that he has to search for a vain in the underground. Ash doesn't know what Clay is talking about and because of that, Clay says that he would be wasting his time battling Ash. Clay walks away from them. Ash shows some frustration, Iris criticizes Clay for being rude, and Cilan suggests that it may be just the way Clay is. Charles and his partner Accelgor ride a motorcycle up to them. Ash scans Accelgor with his Pokédex. Charles introduces himself, and suggests that they head toward to market. Iris walks up to a fruit stand, and the man in charge hands her an apple to give to her Axew. Iris looks puzzled, but he explains that since she is a friend of Charles', that she may have an apple for free. The man calls out to Charles asking how he has been doing, and several other people also asked him. A Ducklett with sunglasses steals a basket of fruit and runs off with it. Ash, Cilan, Iris, and Charles go after the Ducklett.

While chasing Ducklett through an alleyway, Ducklett attacks Ash with Scald and burns him with it. Ducklett's trainer drives up and tries to get away. Accelguard and Accelgor while on top of a building do their superhero poses, and then try a flip kick to the thieves but they fail miserably while hitting the ground hard. Accelgor gets up and uses both Agility and Double Team to surround and stop the thief from driving away. Accelguard tries to start his motorcycle to go after the thief, but his motorcycle won't start making the thief laugh at him. The thief tries to drive off, but a Timburr uses its log to hold the car from going anywhere preventing his escape. Linda shows up and scolds Charles for messing it up. Officer Jenny arrives to arrest the thief and thanks Linda for her help. After changing out of his Accelguard outfit, Charles returns unnoticed at first. Linda explains to everyone how she has been the one stopping the bad guys and not getting into trouble nor messing up like Accelguard has. Linda asks Charles about the similarities between him and Accelguard, how he only appears before and after something happens, and how he also has an Accelgor just like Accelguard. While Linda walks away, the same truck with the Vanillite label passes by, and Linda and Charles both take notice of it. Charles tells Ash that if he wants to meet the real Accelgor, that he should head to the Cold Storage Warehouse later on.

The truck arrives at the Cold Storage where two men in Vanillite suits make a secret routine to tell their boss Doctor Ferrara about what they had accomplished. A Vanillite sign lights up as they finish speaking. Ash, Iris, and Cilan head back to the Pokemon Center and meet up with Charles. Ash at this point doesn't realize that Charles is really Accelguard. He mentions that Charles has an Accelgor as well. Meanwhile, at an Island off the coast, Team Rocket is looking at Tornadus's shrine and notice a Lightning pillar attached to it. Linda looks up on her computer information about recent truck deliveries in and out of the Cold Storage area. She goes to the Cold Storage building to check for herself what is really going on, is noticed by the bad guys. Linda calls out Timburr who uses Focus Punch, but the Vanillite use Powder Snow to freeze it. Ferrara ties up Linda with sticky threads of some sort.

Meanwhile, Ash, Iris, Cilan, and Charles check Linda's computer and Charles starts to worry. Linda asks Professor Ferrara what he is up to, and he explains that they are going around stealing goods, to be able to take over the region, and trying to trick the ice Pokémon into joining their side by bribing them with food. Everyone else arrives to confront the bad guys. Vanillite freezes the floor which causes Charles to slip and slide. Ash calls out Tepig to dry up the floor. Ash gets ready to battle, but Oshawott pops out, slips, runs into Ferrara and breaks the control. Oshawott is ecstatic about that. The bad guys use a smokescreen device to get away. Charles unties Linda and everyone goes after the bad guys.

Charles changes into his Accelguard outfit, and goes after the bad guys. He cuts them off right in front of the truck. He does his hero poses. Everyone confronts the bad guys and begins to battle. Doctor Ferrara "transforms" into Cryogonal Man and brings out Vanillish instead of Cryogonal which everyone questions him about. He explains that Cryogonal was just too difficult to catch because he isn't strong enough. Ash uses Pikachu and Linda uses Timburr to battle the minions' Vanillite to take them down. The Vanillite use Frost Breath to hit Timburr and Pikachu, while Timburr then uses Protect. Pikachu uses Thunderbolt and Timburr uses Focus Punch to take them both down. Meanwhile, Vanillish uses Icicle Spear toward Accelgor, but it dodges and the attack hits Accelguard instead. Vanillish uses Sheer Cold but Accelgor uses Struggle Bug to dodge, and Swift and defeat it. Accelguard and Accelgor take down Cryogonal Man with a kick, he gets back up and finally collapses. Accelguard thanks everyone and drives off in his motorcycle. 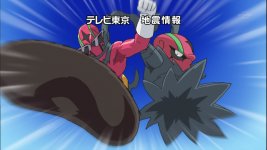 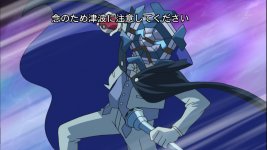