Stopping the Rage of Legends! (Part 2) 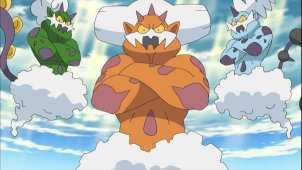 After a recap showing the events from the previous episode, this episode begins where it left off. The flash of light shines brighter and Landorus appears. Team Rocket from a distance notice Landorus' arrival. As Landorus ascends down to everyone, Yuto explains the dire situation with Milos Island, and the conflict with Thundurus and Tornadus. Yuto asks Landorus to help stop the fighting. Looking at the sky, everyone notices flashes of lightning from the battle between Thundurus and Tornadus. Landorus heads towards where the battle is occurring. Everyone hopes that Landorus can take care of the problem. Iris lets Gothorita know that it did a good job summoning Landorus, while Axew agrees causing Gothorita to blush. Meanwhile, Landorus sends Tornadus and Thundurus down from the sky and asks them to stop fighting. Ash, his friends, and Yuto head towards them. Thundurus and Tornadus begin to attack Landorus instead of calming down, but Landorus uses Protect to shield itself. They continue battling each other, while Landorus seems to have the upper hand even though it is outnumbered. Meanwhile, Team Rocket call Dr. Zager and ask him how far away he is from their location. He tells them that he is closing in on their location.

Tornadus, Thundurus, and Landorus continue battling each other, and one of the attacks ends up sending Ash, Iris, Cilan, and Yuto flying. Yuto's Gothorita, and Axew are badly damaged from the blast so everyone rushes them back to the cabin. Thankfully Yuto explains that he does have a Revival Herb which is stored in a jar. Yuto mixes it in a bowl and feeds it to both Axew and Gothorita. Immediately they are both fully healed. Axew and Gothorita make sure that they are both okay.

Everyone heads outside to check how the situation is progressing. Gothorita uses Psyshock to help out. After some more battling between Landorus, Thundurus, and Tornadus, Landorus again asks them to stop fighting. Suddenly, three beams of light in colors of green, orange, and blue shine down on the legendary Pokémon and enclose them in impenetrable boxes. The legendary Pokémon use their attacks to try and break free, but to no avail. Team Rocket reveals to everyone that they are the ones responsible for destroying an important part of the shrines. Everyone becomes angry upon hearing this, and exclaims that such actions will never be forgiven. Roggenrola, Pansage, and Emolga are brought out to help destroy the boxes to set the Legendary Pokémon free. None of their attacks come close to breaking the boxes. Gothorita tries Psyshock, but that doesn't work either. Team Rocket tells them that the boxes are unbreakable. Team Rocket goes inside of their helicopter, and raises the boxes to attach to it. The Pokémon once again use their attacks, but this time on the helicopter itself and end up destroying the controls. Dr. Zager realizes that he has no choice but to release the boxes and the Legendary Pokémon. Team Rocket makes their get away to avoid the helicopter being destroyed.

After Team Rocket gets away, the Legendary Pokémon continue their fighting. Landorus appears to have hurt itself, and because of that Tornadus and Thundurus started really landing their attacks which really damage it. They have Landorus cornered and prepare to attack to finish it off. Meanwhile, Yuto had returned to the cabin to retrieve another Revival Herb to bring it to Landorus for healing. Gothorita uses her Psychic powers to send the Revival Herb to Landorus for it to be able to fully recover to avoid their attacks. Thankfully Landorus received the Revival Herb in time and was able to use Protect for protection. Yuto recalls that one of the diagrams showed the exact same scenario to help Landoruss happened in the past as well. Landorus uses Hyper Beam on Thundurus and Tornadus, which injures them. Landorus touches them and tries to convey his feelings to them about calming down and stoping the fighting, while Gothorita does the same thing with its Psychic powers. Thundurus and Tornadus finally calm down. Sunlight falls upon the land and sea while the Legendary Pokémon begin to revive everything. Tornadus summons rain, Landorus plants the seeds, Thundurus sets fire to them causing the Revival Herb plants to sprout fully, die, and blow away to other areas. The Pokémon repeat this process. After they had finished, Lilligant comes to them to show that it is healthy, while all the other Grass Pokémon appear healthy as well. All of the forest Pokémon return to the forest, and the sea returns to normal. Yuto thanks the Legendary Pokémon for their help, and they go back to the sky.

With a bag full of Revival Herbs, Ash, Cilan, and Iris board a boat and head back to Driftveil and the Driftveil Gym. They wave goodbye to Yuto as they head off. 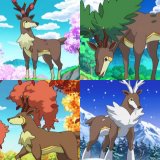 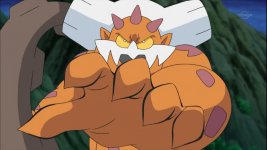 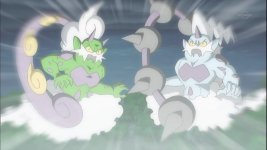