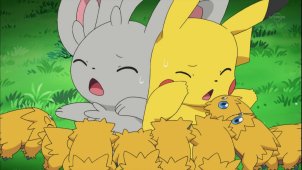 Ash and his friends are on their way to Mistralton City. Cilan points out the Chargestone Cave in the distance. Ash looks over to Pikachu and realizes that he is sick and looks completely worn out. Ash picks up Pikachu to see what's wrong and notices a Joltik on his back draining electricity from Pikachu. Ash attempts to pull Joltik off Pikachu while Oshawott pops out to help, and the Joltik shocks them both. Iris and Cilan decide to check on their Electric Pokémon as well. They bring out Stunfisk and Emolga which both look sick and worn out as well. Iris and Cilan look on in horror. They realize that their Poké Balls are drained as well. They decide that they must head to the Pokémon Center immediately. At the Pokémon Center, all of their Pokémon are healed. Nurse Joy mentions that there have been many instances of electricity draining recently. While recalling their Pokémon, Oshawott shows his affection to Emolga who is surprised by it. Bianca enters the Pokémon Center and knocks Ash into the fountain. After pondering as to why she was in the Pokémon Center, Bianca remembers to ask Nurse Joy to fix her Xtransceiver. Nurse Joy explains that the battery is dead and that she will fix it. Bianca makes a phone call to Professor Juniper to tell her that her Minccino learned Thunderbolt, but Ash interrupts her. Professor Juniper tells them that she is at the Chargestone Cave, and speaks to them about Electric rocks that she is studying inside of the caves. The Professor shows them that she is at the base camp outside of the caves.

All of a sudden the power goes out and they lose communication with Professor Juniper. One of her assistants points out that the problem is coming from a certain area of the Chargestone Cave. Ash, Cilan, Iris, Nurse Joy and Bianca decide to go check out the problem. They look outside, but a group of Galvantula are blocking the door. Nurse Joy tells them that they must remain silent, and soon after, the Galvantula wander back into the woods. Meanwhile inside of one of the cave, Team Rocket is working with the charged up rocks, gathering them up and recording their data. A Joltik wanders in and Jessie sends out her Woobat to use Gust to blow Joltik away from the cave. Woobat knocks Joltik out with a few attacks, and Jessie tells Joltik to never bother them again. Meanwhile, Bianca checks her Xtransceiver and realizes that it stopped working again. Bianca brings out her Minccino and explains to everyone that her Pokémon now knows Thunderbolt. A flock of Galvantula rush to the aid of Joltik and revive it with their electricity. Bianca tells everyone about the trade evolution of Karrablast and Shelmet that she is planning to do with Professor Juniper, Cilan then explains to Ash about how the trade evolution works between Karrablast and Shelmet.

Ash and his friends run into a few more Galvantula. Bianca has Minccino use Thunderbolt on a tree so that they can try and get away while the Galvantula are distracted and then knocked out by Oran Berries. When they try to get away, more Galvantula show up and use Thunderbolt on everyone before wrapping up and stealing both Pikachu and Minccino. Ash runs into an Electroweb barrier when he tries to go after the Galvantula, Iris brings out Excadrill to use Metal Claw to destroy the web. Ash and Bianca run after them but end up sliding down the cliff, Galvantula release both Mincinno and Pikachu and they get scared by the lit up eyes peering from underneath the tree, with several Joltik surrounding them. Meanwhile, Bianca had knocked Ash once again into a body of water, and Ash is displeased by that. Bianca tells Ash that if she throws her Xtransceiver up into the air, they can follow the Galvantula after it grabs the Xtransceiver. She throws it up in the air, Galvantula grabs it, and they run after it.

Meanwhile Cilan and Iris are concerned about whether Ash and Bianca are okay. Professor Juniper and her assistant run into them, and Cilan explains to them what the situation is. Ash and Bianca hide in the bushes and observe what is going on with the Galvantula, Joltik, Pikachu, and Minccino. They notice that Minccino and Pikachu are using Thunderbolt on the Joltik and mistakenly think that they are being forced to do that. Pikachu explains to them that they need to help restore the electricity of the Joltik. Galvantula also help restore the Joltik. Professor Juniper tries to check their location, and explains to Cilan and Iris that one of the caves had been where the problems are arising from. They attempt to open the door to the cave that shouldn't be there, but have to back away as Iris had told them that there is something coming. Team Rocket appears outside of the machine they are using and admit they are the ones causing the problem. Meanwhile, Minccino and Pikachu are playing with the Joltik and the Galvantula suddenly head towards the cave, with Ash and Bianca following.

Iris has her Excadrill use Dig to stop the machine in its tracks. The Joltik and Galvantula arrive and use Thunderbolt on Team Rocket plus their machine which charges up the rocks and sends the machine into the air and back down to the ground. Everyone tells Team Rocket that they will never be forgiven for stealing the rocks, to which Team Rocket replies with an attack. Excadrill and Pikachu use various attacks on Woobat and Yamask back and forth. Dwebble is battling Woobat and struggles; Woobat uses Gust and Dwebble begins to evolve much to Cilan's delight. Dwebble evolves into Crustle and takes Woobat down with its newly learned Rock Wrecker. Ash uses his Pokédex to scan Crustle. Rock Wrecker, Electro Ball and Team Rocket's attacks collide which causes an explosion. Team Rocket gets away in a flying machine with all of the rocks they needed, accomplishing their task.

Ash, his friends, and Professor Juniper head back to the Chargestone Cave. Galvantula and Joltik restore the rocks back to where they belong. Professor Juniper's assistant tells her that she's ready to trade. 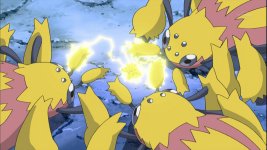 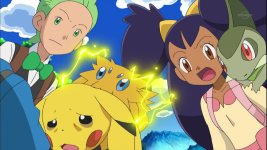