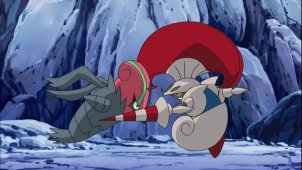 Ash, his friends and Professor Juniper head towards the base camp where they will trade. Professor Juniper shows them the trading machine and tells Bianca that she wants to have a Pokémon battle to gather data on Karrablast and Shelmet first. Ash scans Karrablast and Shelmet with his Pokédex. Axew goes up to Shelmet and makes a scary face which scares the Shelmet, Iris tells Axew to not scare Shelmet and then apologizes to Shelmet for scaring it. Bianca commands Shelmet to use Acid, but Shelmet is too scared of Karrablast to move, to which Bianca explains that her Shelmet is very shy. Professor Juniper has Karrablast use Peck on Shelmet, while Bianca has Karrablast use Protect to block it and Peck does not break through. Karrablast uses Take Down while Shelmet uses Protect again which blocks the attack once again. Shelmet finally appears from its shell and is ready to battle. All of a sudden the machine that is recording the data of the battle malfunctions and they have to stop the battle.

Everyone leaves to check on the trading machine, but it is malfunctioning as well. Bianca does not take the news very well and panics. Everyone tells her that they will solve the problem to fix the machine. They decide that they should check what is going on inside of the Chargestone Cave. Everyone heads inside of the Chargestone Cave, while Professor Juniper's assistant uses an electricity recording machine to check where the levels are too high or to low. Ash scans some wild Klink with his Pokédex, while the assistant explains that they are not the cause of the disturbance. At a dead end in the cave, they run into a Klinklang which appears to be in distress and is giving off excessive amounts of electricity. Ash scans Klinklang with his Pokédex, and then an electric beam almost hits Ash. Professor Juniper brings out a sound-making device that she uses to calm the Kinklang down. Professor Juniper explains that the Klink and Klinkang really like the sound it makes, she walks up to the Klinklang and removes a pen from one of its gears that it was stuck in. Klinklang starts acting normally again, and the electricity is no longer causing a disturbance in the cave.

Bianca was finally able to command Escavalier. Professor Juniper's assistant tells them that all of the data they needed was recorded. Everyone hears something coming from the Chargestone Cave, and Cedric Juniper stumbles out and collapses. Professor Juniper recognizes him as her father. 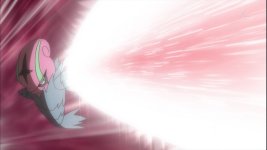 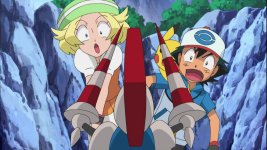