Explorers of the Hero's Ruin! 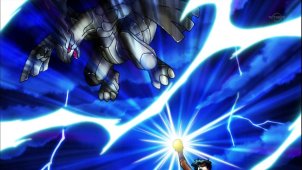 This episode begins with Cedric Juniper stumbling out of the Chargestone Cave and collapses. Professor Juniper recognizes him as her father. Inside of the base camp tent, Cedric Juniper eats a meal and is feeling a lot better after collapsing. Professor Juniper explains to Ash and his friends that Cedric does research on Zekrom and Reshiram. Cedric explains that he may have found the location where the Hero for the hero's legend and Zekrom communicated, but he got lost inside Chargestone Cave while searching. Ash asks Cedric if they can go with him to look for the ruins. Cedric says no which shocks everyone, but he finishes his statement by saying that no reason he should say no. Professor Juniper explains to everyone that Cedric gets lost in his thoughts and has a habit of breaking off his sentences. Ash and his friends put the two statements together and realize that he is saying that they can go with him to the ruins.

Everyone heads off through Chargestone Cave, through the forest, up a rock wall, and later that night camp out in the forest. Ash asks Cedric about the hero's legend. Cedric explains that when the hero turns darkness into light, and links his heart with Pokémon, Zekrom will appear to him its power. Everyone enters the ruins while Cedric explains that they must be careful inside because there are traps all over the ruins to deal with intruders. They reach a Venipede statue, and Cilan approaches it. Cedric says that turning the statue to the left should not be done, but Cilan turns it to the left before Cedric could finish saying that he shouldn't. The wall opens up, and a large boulder rolls towards them. Pansage uses Dig to make a hole for everyone to jump in and avoid the boulder with. Iris is upset at Cedric for not finishing his statement in time. After passing through the newly opened pathway, they see two suspension bridges. Cedric tells them not to cross the bridge on the right, so Ash and Cilan try to cross the bridge on the left. Cedric finishes his statement and says that the bridge on the left should not be crossed either. Ash and Cilan almost fall in but made it back in time. Cedric explains to them that they should not jump to conclusions. Axew is again not pleased that Cedric didn't finish his statement in time again. She points out that there is a separate pathway and they take that instead.

They arrive at three caves, and Cedric explains that only one pathway is the right way. They decide to take the Darumaka pathway first, but a fire appears. Stunfisk uses Mud Bomb to put out the fire so that they can escape the Darumaka path. They decide to take the Krokorok pathway next. The walls begin to close in on them, and Iris has Excadrill hold the walls back so they could escape that pathway. Iris recalls Excadrill to his Poké Ball just before the walls close in on him. Cedric tells them that he knew the remaining pathway was correct all along, but he wanted to set off all traps to enjoy the adventure as much as possible. Everyone enters the Golett pathway, and finds several coffins. They notice that all of them are empty and continue on. One of the coffins open indicating that something is watching them. After passing through the revolving door, they find a large area in the shape of a volcano crater. In the center there are large glowing pillars with a golden dark stone inside of the circle that they form. Ash tries to grab the stone, but Cedric pulls him back saying that it sets off a dangerous trap. Ash imagines that they are crushed and that he would become a ghost. A Sigilyph appears and attacks everyone with Psybeam. Ash scans Sigilyph with his Pokédex. Pikachu uses Thunderbolt which misses, Sigilyph then uses Mirror Move to be able to use Thunderbolt back at them. Sigilyph puts Pikachu to sleep with Hypnosis. Everyone runs away and back to the coffins they passed by before and hides inside of them to wait for Sigilyph to go away.

Once the coast is clear, Ash, Cilan, and Cedric come out of the coffins but notice that Iris didn't come out yet. They say to Iris that she can come out now, but the coffin she is in is actually a Cofagrigus. Ash scans Cofagrigus with his Pokédex. Cofagrigus uses Telekinesis to stop Ash and Pikachu in their tracks. Pansage uses Dig and Solarbeam to attack Cofagrigus and to free Iris. Iris and Axew are freed and are shown to be wrapped like mummies. Everyone escapes through another pathway to a room which is also surrounded by coffins. These coffins were also Cofagrigus which appear and scare them. Everyone continues on the same pathway, but the Sigilyph from before appears and begins to attack them. Cedric reveals to everyone during the chase that he actually grabbed the golden dark stone. He offers to give it back to Sigilyph, but it continues to attack them. Cofagrigus appear and use Telekinesis to send them through another pathway and into some water.

Cedric explains to everyone that the underground area is where the intruders are locked into, and that it is where the hero from the legend communicated with Zekrom. Cedric takes the stone and shows them the mural that is hidden on the wall with it, and explains that it says that the hero met Zekrom underground, and that their combined power helped him escape. Everyone searches and finds the exit which leads back to the area with the glowing pillars. Cedric returns the golden stone back to where it belongs, and Cofagrigus sends them through the opening in the ceiling with Telekinesis. Everyone screams that they love Pokémon and remember all of their great memories they had with various Pokémon in the Unova region. Ash recalls his memories with Tepig, Pidove, Darumaka, Trubbish, Scraggy, Sewaddle, Venipede, Oshawott, Cottonee, Roggenrola, Archeops, Gothitelle, Boldore, and Snivy. Cilan recalls his memories with Dwebble and Pansage. Iris recalls her memories with Druddigon, Excadrill, Deino, and Emolga. Cofagrigus uses Telekinesis to slow them down and to safely bring them back to the ground. They were successfully able to link their hearts with that of the Pokémon. Cedric points out to them that the route that tooks forms a silhouette of a Zekrom. 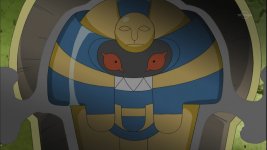 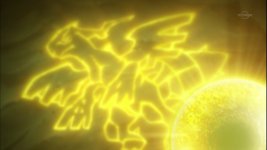