Climbing the Tower of Success! 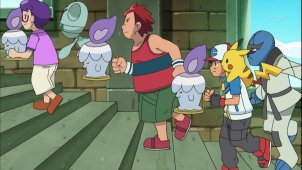 On their way to Icirrus City, Ash and his friends notice the Celestial Tower and Stephan runs into them. Cilan asks Stephan whether he was heading to Mistralton City for a gym battle and Stephan says that he has come for the Bell of Wishes Festival that is held at the Celestial Tower. Stephan explains that during the festival they have to clear various obstacles and the first person to reach the top of the tower wins. By winning the competition, the winner rings the Bell of Wishes to make a wish that is guaranteed to come true. Cilan has doubts that that just ringing a bell guarantees that a wish will come true. Everyone decides to enter the competition.

Stephan explains that they have to choose a partner Pokťmon to help them in the competition. Cilan chooses Pansage, Iris chooses Axew, and Stephan chooses Sawk to be their partners. Ash mentions that it has been awhile since he has last seen Sawk and scans him with his Pokťdex. Mile arrives and asks everyone whether they are participating in the competition. Stephan mentions that Mile is the hos of the festival. Iris and Cilan explain to Stephan that Mile is the former Mistralton Gym Leader, and the grandfather of the current Gym Leader Skyla. Mile explains to all of the competitors what the goal is of the competition. He explains that the first contest is a yes/no quiz, where the competitors who think the answer is correct move to the sign with the circle on it, and the competitors who think the answer is no move to the sign with a cross on it. The first question is whether a Fire type, Grass type, and Rock type are the types of the starter Pokťmon that beginning trainers choose to start their journey. Cilan believes the question is very easy, but Stephan on the other hand believes that the answer is yes and must be corrected by Cilan and Iris. The correct answer is no and only a few competitors get the answer wrong. Mile explains that Water, Fire, and Grass are the types to choose from for beginning trainers. Stephan brags that nobody would get the question wrong, but Iris corrects him and says that he almost got the question wrong. The second question is whether you may eat Castelia Ice Cream on Tuesdays. Ash recalls that they tried to get Castelia Ice Cream but the shop was closed the day they went. Stephan guesses that the answer is Wednesdays, but he was only guessing and doesn't really know. Cilan in a long explanation states that as a connoisseur he always remember and that the answer is Tuesdays. Iris tells Cilan that the long explanation was not necessary. They decide that the answer is yes and move to the sign with a circle on it. Only half of the remaining competitors get the answer correct. The final question is whether Mile prefers Officer Jenny over Nurse Joy. Ash and his friends are stumped as to what the answer could be. Reiji, who claims to be a Psychic tells everyone that he knows the answer because he is a psychic. Ash scans Elgyem with his Pokťdex. Reiji demonstrates his psychic powers by guessing that Ash is a Pokťmon trainer which Iris is skeptical that it demonstrates his powers because anyone could figure out that Ash is a Pokťmon trainer. Mile announces that there is only ten seconds left to answer, so everyone decides to let Reiji tell them the answer. Reiji uses his psychic powers and determines that Officer Jenny is the answer which would mean that the answer is yes. Before Mile could reveal the answer, Elgyem uses its powers to change Mile's mind about what the answer is while Cilan notices what happened. Mile tells everyone that the answer is yes, and only a few competitors answer the question correctly. Reiji again claims that it proves he is a psychic, but Iris says that it was probably a coincidence since it was a 50 percent chance of being correct.

Mile explains to everyone that the next contest is a scavenger hunt where the competitors must choose a random piece of paper that is on the ground, locate the item listed, and deliver it to the staff members at the goal within five minutes. Ash must find a Thunderstone, Iris a Super Rod, Cilan a Wonder Launcher, Stephan a Black Belt, and Reiji a TwistedSpoon. Iris asks Cilan for his Super Rod and Cilan gives a long speech about the rod before handing it to Iris. Stephan attempts to borrow Sawk's Black Belt, but Sawk runs away from him. Reiji was able to obtain a spoon easily and bends it with Elgyem's help even though he says that he is using psychic powers to do so. While asking people if they have a Thunderstone, someone says to Ash that he has one and tosses it at Pikachu. Ash catches the Thunderstone before it could hit and evolve Pikachu. With one minute left, Ash and his friends make it to the staff members prior to the time expiring. A few other competitors made it in time as well with a Fire Gem, a Repel, and a melting ice which was supposed to be a NeverMeltIce instead.

Mile explains that the next contest is for competitors and their Pokťmon to get into a tub in the lake, and make their way to the goal with the help of their Pokťmon. He explains that only the first five competitors may make it to the next contest. Cilan has Pansage paddle like he is using Dig to help them keep moving. Ash has Pikachu use his tail like a paddle and propel them forward. Iris has Axew use Dragon Rage to help them keep moving. Elgyem uses Psychic while Reiji uses his psychic powers to move them to the goal in first place. Cilan reaches the goal in second place, Ash in third place, and Iris in fourth place. With only one spot remaining, Stephan and Sawk jump out of the tub to use Low Sweep and propel all the way to the goal in fifth place.

Mile explains that the next contest is a race through a forest that is full of different trials, with Pokťmon that are ready to attack invaders and that only three competitors may move on to the next contest. A Lampent attacks everyone with Inferno. A female Frillish then attacks Reiji with Water Gun after coming out of a lake. Elgyem uses Psybeam to deflect the attack. Chandelure attacks Iris with Inferno to knock her off of a swinging vine. Iris tries to run away but Chandelure uses Confuse Ray to confuse her. Iris thinks that she won the race and begins to celebrate. Reiji arrives at the goal in first place, and Ash and Stephan arrive at the same time for second and third place. They look over to see that Iris is still celebrating a win while surrounded by Chandelure, a few Patrat, and a few Watchog when she really failed to make it to the next contest.

Mile explains that the final contest of the festival is a race to the top of the Celestial Tower. Competitors must bring lit candles that look like Litwick with them to the top without the flame going out while avoiding attacks by various Pokťmon in the tower, and the first competitor to reach the top wins. Mile advises them to hurry while being slow and careful. A few male Frillish attack everyone with Water Gun and miss their flames. As they are going further up the stairs, they start to become very tired. Some female and male Frillish use Ice Beam to freeze the stairs to make it more difficult for the competitors to keep going. Elgyem uses Psychic to help Reiji avoid the slippery stairs to reach the top. Everyone else slowly and carefully moves up the slippery stairs.

Once they reach the roof, Mile explains Pidove are the last obstacle to reach the finish line. The Pidove use Gust to try and blow away their candles. Ash covers up the flame, Stephan uses Sawk to protect the flame, and Reiji has Elgyem use Light Screen to block the Pidove's attacks. The Pidove use Air Slash and eventually break through the Light Screen and extinguish the flame on Reiji's candle. Ash and Stephan race to the finish line while Pikachu and Sawk block the Pidove's attacks. The candle that Stephan is holding extinguishes Ash's flame which allows Stephan to win the race. Stephan is announced as the winner, but they call him by a completely different name. A real Litwick is revealed to be what Stephan was racing with the whole time. Stephan rings the bell to make a wish.

Ash and his friends congratulate Stephan on his win and ask what he wished for. Stephan tells them that his wish was to win the Donamite. Stephan explains that the Donamite is a battle tournament hosted by Don George of the Battle Club. 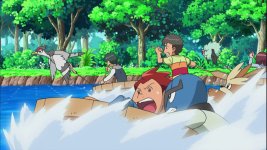 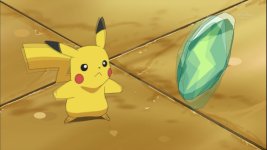