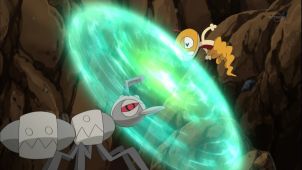 On their way to Icirrus City, Ash and Iris are having a practice battle. Iris's Emolga is battling Ash's Swadloon. Swadloon uses Tackle which hits Emolga and sends her flying. Ash says good job to Swadloon. Emolga hits the ground hard but is okay. Emolga uses Discharge and follows it up with several Hidden Power attacks as Swadloon dodges all of them. Swadloon has a happy look on his face as he is dodging the Hidden Power orbs. Emolga and Swadloon are both enjoying the battle, as Cilan, Axew, Pikachu, and Scraggy cheer them both on. Swadloon uses String Shot several times, as Emolga dodges. The final String Shot wraps Emolga up and Swadloon uses Razor Leaf which lands a hit on Emolga. Emolga uses Discharge on Swadloon, knocking him down. Swadloon uses Energy Ball as Emolga dodges and uses Hidden Power, which knocks Swadloon down. As Emolga lands on the ground, she strikes a pose. Swadloon evolves into Leavanny, which shocks everyone. Ash is very happy to have Leavanny and scans him with his Pokédex. He thanks Emolga helping Swadloon evolve, as Emolga looks happy to hear that.

Ash brings out Snivy, Oshawott, and Tepig to see that Swadloon has now become a Leavanny. Oshawott and Tepig are happy to see Leavanny, but Snivy isn't so sure when she sees him. Leavanny gives leaf clothes to Tepig and Oshawott, who both like them. Oshawott laughs at Tepig which makes him mad, as he Tackles Oshawott. They start fighting, as Pikachu has to break them up. Leavanny tries to give Snivy and Emolga leaf clothes but when they are put on, Emolga and Snivy are not happy to be wearing leaf clothes. Emolga laughs at Snivy which angers her. Snivy uses Vine Whip which Emolga dodges, but the wind blows her away to a branch of a tree. Snivy has to use her Vine Whip to bring her back down to the ground. Emolga is not grateful to Snivy for being saved. A large leaf lands on Axew and Leavanny makes a leaf costume for him. Axew likes his outfit very much.

Scraggy starts nodding off, Axew yawns, as everyone decides that they should take a nap. The Pokémon sleep on a mat, Ash and Cilan sleep in hammocks, and Iris sleeps in a tree. A couple of Durant crawl up to the blanket, grab the leaf clothes, and grab Axew as they crawl away. Scraggy wakes up to find that Axew is no longer next to him on the blanket, and starts yelling for him. Ash and his friends wake up, as Scraggy tells them that Axew is gone. The Pokémon all wake up, with Oshawott and Snivy yawning as they wake up. Iris asks Emolga to go search for Axew, as Emolga yawns and flies off to find him. Ash recalls Tepig, Oshawott, and Snivy as everyone yells out for Axew to let them know where he is. Scraggy has a really concerned look on his face the whole time. Emolga lands on top of a cliff, and notices that some Durant have Axew and follows them to where their den is. She flies back to tell the others where Axew was taken to. Everyone continues to yell out Axew's name. After Emolga comes back to say where Axew is, everyone runs to the Durant's den. They observe a Durant enter the den, as Ash scans it with his Pokédex. Ash and his friends enter the Durant's den. Leavanny uses his sewing thread to create a line to help them get back out after rescuing Axew. Iris recalls Emolga, as Scraggy waves for them to now enter the den.

While walking through the cave, Cilan hits his head while running in to a rock, and then slips and falls on the ground. They have trouble navigating the cave. They stop to think about how they are going to enter the Durant's den, and to be able to rescue Axew. Cilan thinks that one of them should be fully wrapped in leaves, have the Durant carry them to where they are keeping Axew, and they would sneak up to Axew and save get him out of that situation. Ash wonders who will be the one wrapped in leaves, as Iris and Cilan have a sneaky grin on their faces. They wrap Ash in leaves, and Ash is not happy that he is wrapped in leaves, so he tries to wiggle out of them. Leavanny places one last leaf over Ash's face so that the Durant won't know that he is in them. Scraggy volunteers to also be wrapped in leaves to try and save Axew. Scraggy is wrapped fully in leaves.

Ash and Scraggy are on the ground in front of some tunnels, as the Durant pick them up and carry them to where all of the other leaves and Axew are being stored. Iris and Cilan follow behind the Durant without being noticed. Ash and Scraggy are thrown on top of a large pile of leaves. They peek outside of their leaves, but have to hide again after a Durant hears them. Three of the Durant grab balls of leaves and eat some leaves off of them. Iris yells to Ash, but he waves and says to keep quiet. Ash and Scraggy look around to see if they can spot Axew, and see him far in front of them in a pile of leaves. Ash shows Iris where Axew is, and tries to rescue him himself, but they slip, roll down the hill of leaves, and hit the ground. The Durant hear everyone, and call for their friends to come. Ash and Scraggy jump out of their leaves out of fear.

Emolga uses Attract, which is able to affect several of the Durant which confuses the female and leaves them open for attack. Leavanny uses Energy Ball, which hits its mark. Emolga uses Hidden Power to also hit the Durant, as Iris runs up the leaf hill to grab and rescue Axew. When Iris picks Axew up, he is still fast asleep. Pikachu uses Thunderbolt and Scraggy uses Hi Jump Kick to finish off the Durant. Iris recalls Emolga. Ash, his friends, and the Pokémon head back to the exit of the cave that they entered in. Everyone is happy and relieved as they exit the cave. After exiting the cave, Axew finally wakes up, and Scraggy jumps for joy that Axew is safe. Back in the den, the group of Durant wake up to find more leaves and leaf balls for them to eat, as they begin eating them. Ash and his friends continue their journey to Icirrus City. 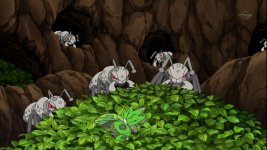 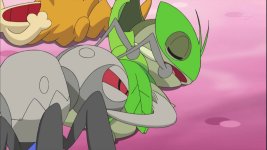