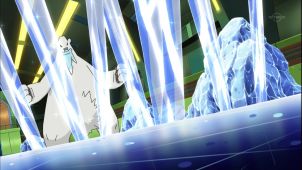 Ash and his friends prepare for Ash's Gym match against the Icirrus City Gym Leader Brycen, as Krokorok and Ash are pumped up to take on Brycen. They arrive at the Gym and begin to shiver due to how cold it is inside of the Gym. Iris says that Nurse Joy told her that since it is an Ice-Type Gym, then it would be very cold. Iris and Axew have a winter outfit on while inside of the Gym. Ash, Pikachu, and Krokorok run to the battlefield, as they slip and fall. Iris calls Ash a kid for rushing to the battlefield. From a balcony, Brycen welcomes them to the Gym, and says that he's looking forward to their battle. He says that because he specializes in Ice Types, the battlefield is made of ice. Brycen's apprentice serves as the referee for the battle.

The referee says that they will use three Pokémon each, and that only the challenger may substitute their Pokémon. Ash chooses Krokorok to battle first, as Brycen is surprised that Ash chose a Ground Type Pokémon which is weak against Ice Type Pokémon for the battle. Ash says that Krokorok may be at a disadvantage, but Krokorok has a lot of motivation. Brycen says that his Ice Types can't be defeated with only motivation. Brycen brings out Vanillish to battle, as Ash scans it with his Pokédex. Krokorok uses Crunch, while Vanillish uses Astonish to send Krokorok to the ground. Cilan says that Astonish makes the opponent flinch and unable to attack, while Iris says that she will have nightmares about the attack. Brycen says that it's a good thing to use unexpected methods in a Gym battle, and that if Ash was confused by it, he won't win. Krokorok uses Stone Edge, while Vanillish uses Icicle Spear, as both attacks collide and one icicle hits Krokorok. Vanillish uses Blizzard, while Krokorok uses Dig, as his body becomes frozen. Krokorok tries to break free of the ice, as Vanillish uses Mirror Shot to break the ice and knock Krokorok down. Ash returns Krokorok to his Poké Ball.

Ash brings out Krokorok again for the battle. Krokorok uses Stone Edge, while Beartic uses Icicle Crash to create pillars to block the attack and send a few stones at Krokorok. Krokorok uses Crunch and Beartic uses Ice Punch, as both attacks collide and Krokorok's mouth freezes. Beartic uses Brine, while Krokorok uses his tail to jump into the air and dodge the attack. The ice finally breaks off of Krokorok's mouth, as he hits Beartic with Stone Edge. Krokorok uses Dig to burrow underground, and then he comes up to hit Beartic. Beartic grabs Krokorok's tail, spins around, and throws him against a rock and the rock breaks from the impact. Krokorok comes out of the ice, as he slaps his cheeks which make them red. Ash says that Beartic made Krokorok want to become stronger, so they must win the battle. Ash sees the stones from Stone Edge, and comes up with an idea. Krokorok uses Stone Edge, while Beartic uses Icicle Crash to create defense pillars and block the attack. Krokorok jumps to grab the Stone Edge, as Iris and Cilan remember that Bianca's Emboar did the same thing to throw stones at Trip's Conkeldurr. Krokorok moves toward Beartic and Beartic uses Aerial Ace, as both attacks collide and both Pokémon land on the ground. Beartic collapses to the ground, as Ash wins the Gym battle.

Krokorok collapses to the ground after the victory, as Brycen gives Ash and Krokorok compliments. Brycen hands Ash the Icicle Badge, as Ash, Pikachu, Krokorok, Scraggy, and Pignite celebrate the victory. Brycen suggests to Ash that he go to Opelucid City for his 8th Gym Badge. Ash decides to go there for his 8th Gym battle. As the episode ends, Iris looks very nervous about them going to Opelucid City. 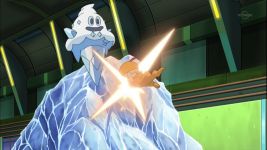 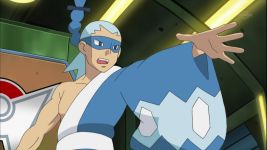