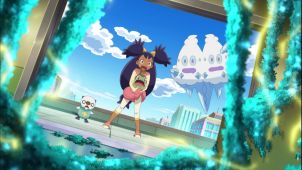 At the laboratories, Clay introduces himself to Georgia as the assistant to the director Marble. Georgia asks to see the moss that is said to increase a Pokémon's powers, as Ash jumps in and wants to as well while introducing himself. Cilan and Iris also introduce themselves, as Georgia asks them why they are following her. They go upstairs, as Clay tells them that Marble is away at an academic meeting so he'll be guiding them instead. As they continue down the hallway, they see three Ferroseed glowing on top of a large rock with scientists studying that. Ash scans Ferroseed with his Pokédex. One of the Ferroseed releases a thorn that turns into moss, as Iris says that there is moss inside of them. Clay explains that they take the components of rocks and stones to turn them into moss spores, which are stuffed into the thorns and then released. He explains that the oxygen produced by photosynthesis of the moss creates a better environment for the Ferroseed.

The Ferroseed in the other room release more thorns to turn into moss, as Georgia mentions that the moss looks like a different color. Clay explains that the moss in the first room came from ores found in the outskirts of Driftveil City, and the moss from the 2nd room came from rocks from the Desert Resort. Cilan mentions that if the rocks and stones are different, then moss is as well. Clay says that it is their biggest research subject. Everyone goes upstairs to the 3rd floor, as Clay shows them the laboratory there as well. A scientist shoots fire at the moss with no effect, another pours liquid into a beaker with moss inside which makes it grow larger, and another shoots moss to break a target. Clay says that Marble intends to put the various forms of the moss to effective use.

In another room, they see three Ferroseed attached to electric stones, as Clay says that they have only started working with those particular Ferroseed. He says that they are very excited to see what type of moss will be released when electric stones are used. Georgia asks where the moss that increases a Pokémon's powers is, as Clay says that they should head to the 4th floor. After everyone leaves, the Ferroseed release several thorns to create a lot of moss and open the door to the room. Clay explains that on the 4th floor, moss that improves a Fire Type's moves, a Grass Type's defense, and a Psychic Type's speed are being produced. Georgia asks if they have moss that works on Ice Types as well, as she brings out her Vanilluxe. Vanilluxe winks at Axew, while Oshawott pops out of his Poké Ball. Vanilluxe floats up to Axew, as Oshawott has hearts in his eyes after seeing the female Vanilluxe. Axew runs away, as Oshawott and Iris follow them.

Georgia asks Clay to give her moss that will change Vanilluxe's personality and increase the power of her moves. Clay says that they haven't discovered moss that works on Ice Types yet, which makes Georgia very disappointed. Cilan says that even with the moss, there may be no way to change Vanilluxe's personality. Ash says that training to learn moves is the best way to work on moves. Meanwhile on the 3rd floor, the moss starts coming out of the room which stuns the scientists, as they run away. Georgia is disappointed, as Clay tells her that when they make moss that can be used for Ice Types they will contact her. Ash decides to go and get Iris and the others, as everyone looks at the computer screen and notices that an alarm is going off on the 3rd floor. They look down the hallway, and see moss everywhere.

Spores from the moss hit Pikachu and cause him to fall asleep. Clay tells everyone to take refuge in the control room that is down in the basement, as they run away from the moss. Moss continues to spread, as Marble shows up and notices the spreading moss. He goes inside of the building, as the moss surrounds the whole building. Meanwhile, Vanilluxe keeps chasing Axew and Oshawott and Iris keep chasing after them. Vanilluxe turns around and uses Icy Wind, as Oshawott fails to block the attack and becomes frozen. Oshawott breaks out of the ice and throws his scalchop down before putting it back on his chest. Axew jumps into Iris' arms, as Vanilluxe winks and lets out cold smoke at Iris and Axew.

In the control room, the scientists are checking on the Ferroseed, and Ash is worried about Pikachu. Cilan wonders what could have caused it to happen, as Marble shows up and says that it is likely caused by the moss. He says that because Pikachu breathed in a lot of spores, they caused the symptoms that he is having. He notices that the Ferroseed attached to the electric stones are causing it. He says that they should mix Lum Berries, Mago Berries, and White Herbs to make medicine and have Pikachu drink it. Cilan mentions that they may have breathed in the spores as well and wonders if they will be affected as well. Georgia wonders about her Vanilluxe as well. Marble says that from the data they've collected before, that it has no effect on humans.

Nurse Joy calls them, as Marble apologizes for there being so much trouble at the current time. Nurse Joy says that all of the Pokémon brought into the Pokémon Center have breathed in the spores and are in very bad shape, and that those affected are Ground Types and Electric Types. Georgia realizes that her Vanilluxe should be fine for now, as Marble tells Nurse Joy that he will tell her how to prepare the medicine to give to the Pokémon. Another screen on the computer shows that the moss is continuing to spread. Marble says that they should ask Officer Jenny to block off the bridges, and that they must find away to stop the moss from spreading. Pikachu drinks the medicine and then takes a long rest. A scientist says that the moss is headed towards the roof, and everyone notices that Iris and the others are outside.

Iris and the others arrive at the door, and are shocked when they see all of the moss blocking the way. The door closes with Iris and Axew relieved, as Cilan calls and tells her that the moss from the 3rd floor is spreading rapidly. He tells her that Electric Type and Ground Type Pokémon will be badly affected if they come in contact with the moss. Georgia yells at Iris to not let anything happen to her Vanilluxe, as the moss starts appearing from behind the door. They run away from the moss, and notice that the moss is all over the building and the street. Iris says that they have to stop the moss, as she brings out her Emolga and Excadrill to attack. Iris tells Excadrill to use Focus Blast and Emolga to use Hidden Power, but they breathe in the spores and become sick. Iris realizes that she was told about Electric Types and Ground Types being affected by it, as she returns them to their Poké Balls.

Iris tells Axew that she'll protect him no matter what. Oshawott uses Water Gun on the moss, but it just keeps spreading. Iris and the others have terrified looks on their faces, as they wonder what to do next. Iris tells Vanilluxe to do something about it, as Vanilluxe uses Icy Wind to freeze and destroy the moss in front of them. The computer screen goes black, as the scientist thinks that the moss caused it. Clay and Marble realize that the moss is weak to Ice Type moves, as Marble tells the scientist to tell Officer Jenny to use Ice Type moves to stop the moss from spreading and remove it from the city. The Ferroseed break through the glass, as Marble says that they have taken more than the maximum amount of electricity. He says that they will have to put them under containment to discharge the electricity so that they stop producing the moss. They wonder how they will get to the 3rd floor, as Georgia brings out Beartic to help out.

Georgia and Beartic show up, as Beartic uses Ice Beam to destroy the moss. Georgia says that Iris is very in sync with Vanilluxe, as the Ferroseed run into each other. Marble opens up the containers and turns them on to try and contain the Ferroseed, as he apologizes to them for making them suffer. The three Ferroseed are brought into the containers to drain the electricity. Pikachu wakes up and feels a whole lot better, which makes Ash very happy. More electricity comes out of the containers and the Ferroseed are released from the containers, as Clay realizes that the Ferroseed cannot control themselves. He says that for them to be contained, their electricity needs to be released. Ferroseed release more thorns to make more moss, as again Beartic uses Ice Beam and Vanilluxe uses Icy Wind to destroy the moss. Beartic and Vanilluxe look exhausted, as Cilan says that they have reached their limit. Cilan tells Georgia that they shouldn't be pushed anymore, as Georgia says that they can't just stop. Marble wonders if there is anything that they can do about it.

Georgia returns Beartic to its Poké Ball, as Ash and Pikachu arrive. Ash brings out Pignite, as he uses Flamethrower to hit Ferroseed and send them to the ground and Ash returns Pignite to his Poké Ball. Pikachu runs up to Ferroseed to absorb the electricity, which impresses Marble. Cilan brings out Stunfisk, as it goes over to the Ferroseed to also absorb electricity. Iris and the others run across the room to join everyone else. Pikachu and Stunfisk successfully absorbed all of the excess electricity. Marble checks on the Ferroseed and apologizes to them for the pain they went through. Pikachu and Stunfisk release the excess electricity outside, as some of it comes towards Oshawott. Oshawott tries to block it with his scalchop, but it deflects it at everyone to shock them. Oshawott also gets shocked after he stopped deflecting the electricity.

All of the moss has been destroyed, as Marble apologizes to Nurse Joy for all of the trouble that happened. Nurse Joy tells them that thanks to the medicine, all of the Pokémon have recovered. Professor Marble thanks everyone for all of their help. As the sun sets, Georgia tells Iris that she may be more suitable as an Ice Type Master instead of a Dragon Type Master. She says that even though Iris dislikes Ice Types, her teamwork with Vanilluxe was perfect. Iris says that she would never aim to be an Ice Type Master. Georgia says that she'd have a lot more fun defeating a Dragon Master, as Iris wonders who really is going to be defeated in battle. Iris says that she may not like Vanilluxe but is grateful it saved her, so she asks Georgia to tell her that she said thanks. Georgia says that she will do that when she feels like it, as she says good bye and walks away. Ash is very excited about his upcoming Gym match, as they ride on a boat towards Virbank City. 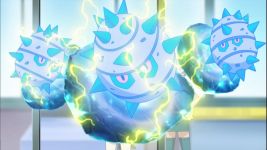 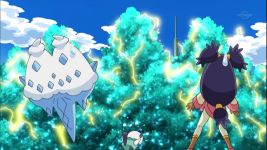