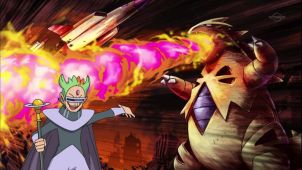 Ash and his friends arrive in Virbank City for Ash's next Gym battle, as Ash is excited about winning his next Gym Badge. Cilan is excited that they are in the city that is important to Movie Connoisseurs. He explains that filming and production of a lot of films occur in Virbank City. Ash and Pikachu look over to the side, as they see someone who looks like Ash. The fake Ash transforms back into Zorua, as Ash and his friends see that Luke is in Virbank City as well. Ash tells Luke that he is their for a Gym battle, while Luke says that he is there because he was invited to an early screening of a movie. Luke says that Pokéwood was built inside of the amusement park. Cilan says that Pokéwood is a an attraction that has sets and props that allow people to create their own movies.

Luke reminds them of the movie they made together with Ash as the main character. He says that "The Legend of the Pokémon Knight" won several awards in the film festivals. Iris says that it must have been their hard work that allowed the movie to win awards, while Ash says that it was probably because he was the main character. Luke asks Ash and his friends if they could help him out when they get to Pokéwood. Ash and his friends arrive in Pokéwood, as they see footprints of Pokémon stars on the ground. Pikachu checks out Brycen's Beartic's footprint and compares it to his own. Ash and his friends take a look at old movie posters, movie props, and a crystal tower. Cilan and Luke are very excited about everything they have seen. Luke says that there is a movie competition that it going to take place in Pokéwood, and that he wants to create a new movie. He says that the best director will be chosen by the audience. Ash and his friends decide to help Luke out with creating a movie.

Gold walks up to them, as Luke says that he is the President of Pokéwood. Cilan says that Gold produced some of the famous movies. Gold says that he wants to see Luke's movie, and that he can hardly wait to see it in the competition. A woman shows Ash and his friends the costumes they may use in the movie, and hands them a catalog of the sets and props. Cilan notices that the participants will have the same costumes and props, while Luke says that it is to see how a Director can create something unique from the same props and costumes. Ash and Iris eat lunch, while Luke and Cilan were finishing the screenplay. Luke finishes showing them the storyboard of the movie, as Ash is very excited. Cilan says that it's up to the actors now to shine on camera.

Jaws walks up to them and says that the story isn't good, as Ash scans Krookodile with his Pokédex. Jaws says that he is Luke's rival, as Luke says that they have been competing against each other in movie festivals for awhile. Jaws says that his specialty is in making authentic action movies, and that they will find out who the best director is after the audience votes after the premieres. Ash, Pikachu, and Pignite are the heroes of the Unova Defense Group, Cilan is the alien that manipulates the mecha Tyranitar, and Iris is the priestess of Pokémon Island and is accompanied with Zorua and Axew. Luke tells Cilan that he can make up how he wants to control the mecha Tyranitar. Cilan says that he will be able to perfectly control the mecha Tyranitar. Golett is going to be the Assistant Director, Leavanny is going to take care of the costumes and make up, and Luke will be the cameraman and Director.

Ash and Pignite are in a space ship in front of a green screen for the first scene, as Luke says that during the scene, they are ready to attack the Tyranitar on Pokémon Island. Iris wonders if the ship will look like it's actually flying in the sky, as Luke says that with the green screen behind it they can place a picture of space behind the space ship. Cilan says that the giant fan will make the wind to make the scene look more realistic. Cilan holds up a net of dry ice, as the large fan blows smoke toward the space ship. The first scene is shot, as Ash says his lines and Pikachu and Pignite use their attacks from the top of the space ship. The next scene is shot with Leavanny, Excadrill, Oshawott, Snivy, Scraggy, Crustle, Boldore, Stunfisk, Emolga and Pansage yelling out. The next scene has Golett on the ground, with Iris and Axew next to it. Iris thinks that she needs eye drops to be able to cry, as Cilan says that she should imagine she is saying goodbye to Axew. Iris imagines saying goodbye to Axew, as she is finally able to cry. Luke shoots the scene, as Zorua is shown transforming.

The next scene is shot, as Golett and Ash use paper fans to create smoke around a miniature UFO and Cilan uses his fishing rod to hold up the UFO. Luke says that the scene needs to be more powerful, as he finds something in the catalog and asks Ash to get it. Meanwhile, Meloetta floats around the city, as Team Rocket watches it very closely. Ash and Pikachu look for the model, as they see Meloetta near by. Meloetta runs into a log, as several boards begin to fall on her. Ash dives to save Meloetta from being hit, as Ash notices that Meloetta is no longer there. Meloetta reappears and looks at Ash. The scene is re-shot, as a miniature ship is hit and begins to smoke and a UFO is shown.

Ash and his friends watch the footage that they shot, use a computer to put the images and scenes together, say their lines into large microphones, and then celebrate that they finished filming the movie. Jaws' movie is shown on the screen, as Ash and his friends watch. The mecha Tyranitar is shown launching beams to destroy the city, as Jaws and Krookodile drive in a vehicle with a large laser to the mecha Tyranitar. Jaws launches the laser beam to destroy the mecha Tyranitar, as the film ends. The audience claps and Jaws smirks at Luke, which annoys him. Luke's film begins, as Zorua is shown barking as if she was the lion that is in the beginning of many films. Ash, Pikachu, and Pignite fly in a ship, as they see the Tyranitar in the water. Ash says his lines, while Pignite and Pikachu jump on the wings of the ship. Pikachu uses Thunderbolt and Pignite uses Flamethrower to hit the Tyranitar, as it turns into the mecha Tyranitar. The mecha Tyranitar launches a red laser beam to hit the ship, as it begins to smoke.

Luke wonders if his movie wasn't good, as Jaws thinks that he won which annoys Luke. The announcer announces the results of the audience's votes, as Luke wins the competition. Gold presents Luke with the winning trophy, as he says that he is looking forward to Luke's next movie. Gold says that Pokéwood will also cover the production of Luke's next movie. Zorua transforms into Iris and Golurk, as she shows that she played those two characters in the movie. As the sun sets, Luke says that he will be staying in Pokéwood to think of his next project. Ash is excited about his upcoming Gym battle. Ash and his friends say goodbye to Luke, as they head toward the Virbank City Gym. The episode ends with Meloetta shown following Ash and his friends. 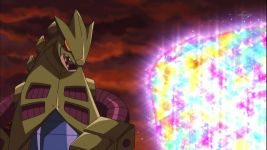 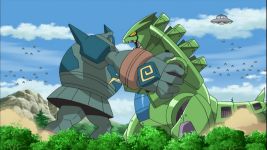