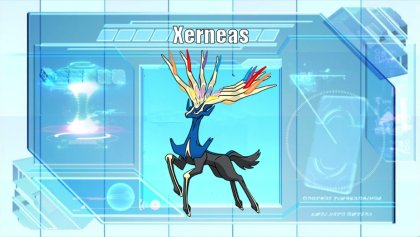 Xerneas, the Life Pokťmon. Legends say it can share eternal life. It slept for a thousand years in the form of a tree before its revival. When the horns on its head shine in seven colors, it is said to be sharing everlasting life.

Xerneas returns as a potent force in the 8th generation. Possessing what is undeniably the most powerful boosting move in the game, Geomancy turns Xerneas into a peerless sweeper able to end battles after a single turn of setup. And with the excellent Fairy typing both defensively and offensively it is easy to see why. Dynamax further complicates the matter, further boosting Xerneasí bulk and power for a time, while granting easy access to Misty Terrain to stop status attempts.

However, Xerneas has changed little in the generational shift, which cannot be said for the environment around it. Powerful new Steel and Poison types have been introduced reducing the windows Xerneas can boost and giving it more trouble than Primal Groudon ever did. Dynamaxing is also a double-edged sword, giving targets it would normally KO after a Geomancy boost sufficient bulk to survive a hit and strike back, limiting the amount of damage Xerneas does. Additionally, its old flaws remain apparent. Xerneas is reliant on getting that Geomancy boost to be offensively threatening, so being forced out or having its Power Herb Knocked Off can stop a Geomancy sweep before it starts, after which, Xerneas does not have the recovery to afford a second attempt. The fact that Xerneas remains such a potent force despite its relative predictability is a testament to its strength. .
Positives
Geomancy is a wholly incredibly boosting move. 2 Quiver Dances in a single turn with Power Herb turns Xerneas into a force of nature.
A STAB boosting ability, Base 131 Offenses and decent coverage makes Xerneas even harder to stop once it gets going
Mono-Fairy typing and excellent 125/95/98 defenses give Xerneas good bulk, allowing it to take up defensive roles if need be.

Negatives
No direct answers to Poison and Steel types require them to be weakened or removed for a sweep can be attempted.
Xerneasí power is far less impressive without the Geomancy boost, leaving it prone to be walled, outsped, and overwhelmed if Geomancy is disrupted.
No reliable recovery outside of Ingrain and Rest prevents multiple Geomancy boosting attempts and hinders defensive sets.

The Power of Earth

Geomancy Xerneas is a potent win condition once opposing Steel and Poison types have been weakened and or eliminated. Pivot Xerneas freely after a KO on something that doesnít threaten it directly or that Xerneas threatens out, Geomancy using Power Herb to skip the charge turn and go for the sweep. Moonblast is for STAB and being further boosted by Fairy Aura makes it Xerneasí attack of choice in most situations. Thunder is largely for Ho-oh, whose Fairy resistance, titanic Special Defense, and good Attack makes it a good stopgap against a Xerneas sweep. Substitute rounds out the set, giving Xerneas more opportunities to setup while blocking status.

DYNAMAX:
Xerneas enjoys Dynamaxing, the extra bulk and power makes it even harder to revenge kill and more difficult to resist. Moonblast becoming Max Starfall provides excellent utility, giving immunity to status that can end a Geomancy Sweep, while Max Lightning having extra power and perfect accuracy is great for dealing with Ho-oh. However, it can be difficult to have Dynamax ready to go by the time Xerneas is ready, and there are better dedicated Dynamax sweepers than Xerneas.

EVs and Items:
88 Speed EVs guarantees that Xerneas outruns neutral natured Necrozma Dusk Mane, with everything else going into HP and Special Attack for the best mix of Power and Defense. Defense investment can be considered -Xerneasí Defense is not boosted by Geomancy and it can reduce the chance of offensive Necrozma OHKOing by a significant margin, but the returned dividends from more healing, more durable Dynamax and Substitutes are worth while too. Additionally, one could invest all into Defense to open more opportunities to setup, but the drop in power is noticeable, missing out on key KOs. Power Herb is the only choice. The two turn setup for Geomancy gives your opponent too much opportunity to stop Xerneas.

Partners:
Groudon makes for a wholly excellent partner for Xerneas. The Fairy/Ground offensive core is well known, and Groudonís and Xerneasís complimentary offenses prevents enables them to answer the others checks. Zygarde Complete can also function in a similar role and be another potent win condition. Choice Scarf Kyogre also makes for a decent partner, able to quickly revenge KO Zacian Crowned and Necrozma Dusk Mane, as well as patch up Thunderís shaky accuracy and weakening Necrozma-Dusk Maneís Morning Sun. Zacian Crowned ironically enough is one of Xerneasí largest enablers. An Imprison set can shut down and eliminate opposing Zacian Crowned while its enormous Attack threatens most sponges used to slow down Xerneas and Xerneas in turn threatens many of the physical walls used to slow Zacian Crowned.

Other Options:
Ingrain -Prevents Whirlwind and Roar and gives Xerneas much more staying power. While Dynamax offers more, it is a temporary defense at best, and may not be available when it comes time for Xerneas to shine.:
Aromatherapy -Gives Xerneas valuable Clerical support and invalidates attempts to Toxic or Paralyze it to stop the sweep.:
Psyshock/Focus Blast -coverage options against Blissey and Ferrothorn respectively.

Geomancyís power is so great that even in doubles formats Xerneas sees great use. Its fantastic bulk and overwhelming power enables Xerneas to run away with games, and thanks to Xerneasí excellent typing, it is rare for an opponent to have two direct answers to Xerneas on the field, making getting Geomancy up relatively simple. However, Zacian Crownedís popularity in Doubles gives many teams a reliable answer to Xerneas and other methods of disruption like Trick Lagging Tail, Parting Shot and Eerie impulse are great for shutting down Xerneas.

King of the Herd

Xerneasí strategy is largely the same in Doubles formats as in Singles. Geomancy and spam STAB Fairy Aura boosted Moonblasts. However, reaching that point can be a difficult road. Xerneas represents such an overwhelming threat on the field, your opponent will be focusing on it to prevent Geomancyís usage. As such stalling tools are required so that Xerneasí teammates can eliminate the threats preventing a sweep. Protect and Substitute are excellent at this role, stalling out time on weather, terrains, screens, Tailwind and Trick Room. Mix up Substitute turns with redirection or Fake Out from Xerneasí partner to keep the Substitute intact.

Partners:
Sun Teams are a natural fit for Xerneas. Not only is Groudon a fantastic partner due to the Fairy-Ground combo, it enables dangerous Sun sweepers that naturally answer Zacian and other Steel types. It is difficult to bring Zacian just to answer Xerneas when most opposing team answers Zacian. Rage Powder from Amoongus and Fake Out users like Incineroar and Rillaboom are fantastic in ensuring a safe Geomancy setup. Hyper Beam -turns into a massive Max Strike that answers Poison types while providing excellent Speed Control for the rest of Xerneasí team. Thunder -Kyogre ruining the Sun? This answers Kyogre quickly and cleanly.

Stopping a Geomancy boosted Xerneas is one of the most difficult tasks to perform in a battle. Shedinja is by far and away the best answer, only hit by the rare Night Slash/Toxic. And able to force Xerneas out easily. Zacian Crowned is a close second, able to tank a Geomancy Boosted Moonblast and OHKO back with Behemoth Blade regardless of Dyanamax. Catching Xerneas on the Geomancy boost with Whirlwind or Roar is an option, wasting the Power Herb and leaving Xerneas out a boost for the rest of the battle. Ho-oh excels at this, having the Special Defense and Fairy resistance to tank a Geomancy Boosted Moonblast and Regenerator to shrug off the damage, but this tactic can fail due to Dynamax or Ingrain. As with any Special Attacker, Blissey and Chansey are excellent at sponging attacks and wearing down Xerneas with Seismic Toss and Toxic, but must be wary of Psyshock. Specially bulky Steel types like Necrozma-Dusk Mane and Ferrothorn can also perform a similar role. Paralyzing Xerneas also makes dealing with Geomancy boosts much easier, but again Xerneas has numerous methods (Max Starfall Misty Terrain, Substitute, Aromatherapy) to counter act that.. 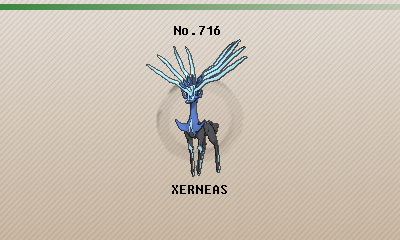