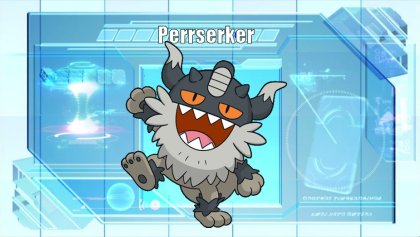 Perrserker, the Viking Pokémon. What appears to be an iron helmet is actually hardened hair. This Pokémon lives for the thrill of battle. After many battles, it evolved dangerous claws that come together to form daggers when extended.

Perrserker was quite the shock when it was first discovered. Instead of a Galarian Persian, Galarian Meowth evolves into this rough and tumble cat viking that makes Team Rocket’s disguises in the first Pokémon movie oddly prophetic. And a scrapper Perrserker is, with access to Swords Dance, two fantastic power boosting abilities in Tough Claws and Steely Spirit, a slightly buffed Adaptability belying its decent 110 Attack and good moveset to take advantage of these traits. Perrserker hits hard and thanks to the excellent Steel typing, is resilient against passive damage and has a few moves it can come in on.

Or that would be the case if it wasn’t for Perrserker’s crippling flaws. Base 70 HP is only average while base 60 Special Defense is poor, meaning even resisted special hits can have Perrserker reeling. And base 50 Speed means Perrserker is frightfully slow, further compromising its below average bulk as it will get hit before dealing any damage. Additionally, as an offensive typing Steel is rather poor with numerous resists that take a bit of bite out of Perrserker’s offense. Perrserker can certainly lay down the hurt, but being too slow and too frail gives this viking a life sentence of mediocrity.
Positives
Base 110 Attack and access to Swords Dance gives Perrserker quite a bit of bite to its attacks.
Tough Claws and Steely Spirit are fantastic boosting abilities and compliment Perrserker’s attacking moveset quite well.
Base 100 Defense and the excellent Steel typing gives Perrserker several opportunities to pivot into attacks

Negatives
Base 50 Speed is poor, leaving Perrserker prone to being outsped, compromising its bulk.
Base 60 Special Defense is a noticeable gap in Perrserker’s armor, with even resisted Special Attacks hurting.
Steel is poor offensively for a STAB, with several common resists that hurt Perrserker’s offense quite a bit.

Perrserker acts as potent wallbreaker, using Swords Dance to boost its damage to amazing heights before tearing through walls that are slower than it. Iron Head is STAB of Choice, hitting hard thanks to the Tough Claws boost in addition to STAB, enabling Perrserker to hit much harder than its attack would suggest otherwise. Close Combat synergizes wonderfully with Iron Head, hitting most Steel resists for neutral, while hitting other Steel types for Super Effective and getting the Tough Claws boost. Seed Bomb rounds out the set, hitting Water types that otherwise resist Iron Head and punishing bulky water types like Quagsire.

DYNAMAX:
Perrserker makes for a decent Dynamax user, especially after a Swords Dance. Being able to scale up its Defense and Attack with Max Steelspike and Max Knuckle is nice too, though the drop in power on Max Knuckle is especially noticeable since it loses the Tough Claws boost. While Perserker is not material for a dedicated Dynamax Sweeper, it can use the extra bulk granted to muscle through otherwise excessive damage.

Partners:
Pokémon that can answer the faster Ground, Fire and Fighting types are greatly appreciated. Pelipper stands out, setting up Rain to reduce Fire weaknesses, able to setup Tailwind to patch Perrserker’s speed woes, and provides Special Offense to compliment Perrserker’s Physical. Aerodactyl, Cramorant, and Noivern also fill a similar niche.
Speed control of any form is greatly appreciated. In addition to Tailwind setters, Sticky Web is another excellent method of Speed control. Araquanid is excellent, able to answer Perrserker’s weaknesses beforehand, and having excellent Special bulk.
Dragon types like Regidrago, Flapple, and Dragalge enjoy Perrserker’s ability to answer most Fairies, and Steel types, opening up opportunities for them to sweep after Perrserker has done its job.

A Band of Vikings

Choice Band Perrserker trades the pure wallbreaking power of Swords Dance for a more hit and run approaching, coming in on weakened walls and forcing your opponent into a difficult decision: do they keep their wall in and lose it, opening a gap in their defense, or do they pivot out to a resist and take a considerable hit? Iron Head is Perrserker’s best move, boosted both by Tough Claws and STAB, while Close Combat is extremely complimentary and hits most Steel types that could pivot into Perrserker’s STAB otherwise. U-Turn is great if you expect your opponent to switch, dealing considerable damage between the Tough Claws boost and the Choice Band, while switching out to your opponent’s counter’s counter. Crunch rounds out the set, having great neutral coverage with the rest of Perrserker’s moves hitting targets like Jellicent and Doublade hard on the switch in.

DYNAMAX:
Perrserker makes for a decent Dynamax user, enjoying the choice lock break. Being able to scale up its Defense and Attack with Max Steelspike and Max Knuckle is nice too, though the drop in power on Max Knuckle is especially noticeable since it loses the Tough Claws boost. While Perserker is not material for a dedicated Dynamax Sweeper, it can use the extra bulk granted to muscle through otherwise excessive damage.

EVs and Items:
Standard Sweeper Array. Perrserker needs as much Speed as possible to reduce hits it takes while bursting holes into the opposing team. Choice Band is the crux of the set giving Perrseker instant power. Choice Scarf is not recommended. Perrserker is still outsped by every other Choice Scarfer, as well as Base 95/Base 100 speed threats even after the Scarf boost, while losing out on the power that makes it so noticeable in the first place.

Physically Defensive Skarmory, Toxapex, and Corviknight stand out as being far too bulky for Perrserker. Even after a Swords Dance it fails to 2HKO them while they threaten 1-2HKO in turn with Body Press/cripple with Scald.

What is more reliable is to exploit Perrserker’s poor speed and bulk. Many, many Pokémon outspeed and can either cripple Perrserker through status like Will-o-Wisp or Scald, or outright OHKO it, especially special attackers. 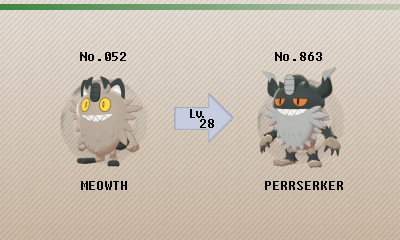