Cradily, The Barnacle Pokťmon. It lives in the shallows of warm seas. When the tide goes out, it digs up prey from beaches. Its heavy body weighs it down so it won't get washed away in rough weather. It ensnares prey with its eight tentacles. It then melts the prey with a strong acid before feeding.

Cradily is an odd Pokťmon. When you look at it, you think it can't possibly be a tricky Pokťmon to deal with, but when used right, Cradily can be very scary. Unlike its other fossil bretheren, Cradily fits in as a perfect Support Pokťmon thanks to its bulk and movepool and it's also unusual in that it is a Rock-type with a Special Defense focus. With various recovery moves, it can completely wall and gradually sap opponent's life until it is victorious. As it's based on a variety of immobile sealife, its Speed means that you need to shore up its defences so it can survive a hit, but if you throw it in a Trick Room team, it can be quite brutal. However, with its typing, it is weak to a vast majority of commonplace moves, so using it can be risky. That said, throw it in a sandstorm team and it can be beastly to the point that it can fully survive an Aura Sphere from a max Special Attack Mega Lucario.
Positives
- It has decent defensive & Hit Point stats giving it considerable bulk
- Its movepool and bulk make it a fantastic support Pokťmon
- It works great in stalling and support
- It has unique typing
- Its recovery moves are varied
- In a sandstorm, Cradily's Special Defense becomes immense

Negatives
- Its unique type means it has a varied amount of weaknesses to common moves such as Bug-type moves, Brick Break & Bullet Punch
- Its attack stats aren't overly good
- Its movepool is rather shallow if you're going for an offensive attack
- Its Speed could be better

Suction Cups: Negates moves that force switching out. A decent enough ability as being forced out via Dragon Tail or Roar when you have set things up can be annoying. Hidden Ability (Available):
Storm Drain: Water-type moves are drawn to this Pokťmon. Water-type moves will do no damage and the Pokťmon's SP ATK is raised one stage. - This ability is very handy in Double & Triple battles if you partner with a Pokťmon weak to Water-type moves. Boosting the Sp. Attack is also useful if you want to run a Special set on it.

This is a classic support set for Cradily. As it can survive hits, it is fully capable of setting up various things and, thanks to Storm Drain, it can easily switch in to Water-types to give it that extra boost. Stealth Rock is pretty self explanatory after all this time and is a much used entry hazard. Now, there's also some moves to use in case of Taunt. Energy Ball is a decent option for the Kalos Native Cradily, but it lacks the recovery that Giga Drain had. As Giga Drain is only available through tutor in Black 2 & White 2, that means you can't use it in official tournaments just yet. Toxic is always a good option on Cradily as you can just poison Pokťmon to your heart's content while Rock Slide will easily deal with any Bug, Ice or Flying-type Pokťmon that may give Cradily some grief. Recover will heal Cradily quite handidly, as well.

This physically focused set is one that, while looking gimmicky, works exceedingly well, especially if set up into a sandstorm. Curse will boost Cradily's Attack & Defense, while lowering its Speed which is pointless on Cradily anyway. Rock Slide gets STAB and, after a Curse, will do decent damage. Seed Bomb works in a similar way which Earthquake provides some extra coverage. As usual, Recover heals. An alternative in this would be to replace Earthqake and Recover with Rest & Sleep Talk. This gives you the added advantage of being able to heal from a Burn if you manage to get inflicted with one.

Ingrain, Reflect/Light Screen, Sandstorm, Sludge Bomb, Sludge Wave, Stockpile, Stone Edge, Synthesis
Ingrain is a move commonly associated with Cradily. It will gradually give you health back, which teamed with other moves, can make Cradily an incredibly annoying Pokťmon.
Cradily is also a Pokťmon that can be a dual screener, running both Reflect & Light Screen since it can set them both up, especially if you put Light Clay on it
Sandstorm is another move that can be good for Cradily to set up. As it boosts its Special Defense considerably, it makes it an even bigger threat.
Sludge Bomb & Sludge Wave can give some decent move alternatives.
Stockpile is a good move to shore up your Cradily's Defense stat
Stone Edge is an alternative to Rock Slide
Synthesis can work as a recovery move, but if you're going to use Cradily in a Sandstorm team, it will be a big hindrance

Let's get down to business, Cradily loves Rain and Sand. Rain because Storm Drain will pick up any Water moves aimed at your side and give it a SAtk boost, alongside allowing your Rain team to use Surf freely. Cradily loves Sand because it's a Rock type and gets a Special Defense boost, this is huge for Cradily because it has 86/97/107 defenses already, 107 being its Special Defense. And again, with Storm Drain, any water moves aimed at your side are redirected to Cradily and turned into a special attack boost. Some sand teams have serious trouble when going up against Rain and Cradily can provide a solid answer against it. It's also Grass type, so Spore, Leech Seed and Rage Powder won't affect it.
This set suggestion will assume you are also running either Sand or Rain on your team as well

I know there are a lot of options for the last moveslot, let me explain.
Giga Drain and Pain Split are transfer only, and the goal of this last slot is to provide and alternate form of recovery for Cradily. Infestation will trap any Poke on your opponents side and make them easier to take down. Ancient Power is Cradily's Special Rock move with a chance for all stats being raised, but Protect won't steer you wrong. According to your team, you may not even want to run a Rock or Grass move. Be sure to make Cradily work for you rather than make your team work for Cradily.

Cradily's biggest problem is fighting and steel moves, so your team may want to carry things that can handle Scizor, Lucario, Terrakion and the like. Aegislash comes to mind immediately, benefits from Rain and isn't damaged by Sand.

Cradily can excel in weather, be a nightmare for or in Rain Teams and is very solid in Sand, but without the weather all it can really brag about is an immunity to water and powder moves. I recommend any and all Sand Teams try out Storm Drain Cradily. If you run Rain, Cradily doesn't mind Surfs and can become a powerhouse after a few boosts.

Cradily is a very annoying Pokťmon to take out. As it has a wide range of recovery moves, your best bet is to Taunt it so it can only attack you. In addition to that, Cradily is weak to common types such as Fighting, Ice, Steel and Bug. if you go for physical forms of these moves, you'll be able to break through Cradily with relative ease, especially as Cradily is likely to be put out within a Sandstorm where its Special stat gets boosted. If it doesn't use Rest as its recovery move, then inflicting Burn or Poison on it will also ruin its bulk. 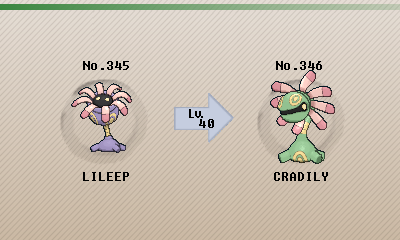