Battling For The Love of Bug-Types! 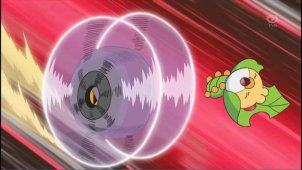 Ash and his friends arrive at the Castelia Gym in Castelia City, so that Ash may challenge Burgh for his third Gym badge. They walk inside, as they notice that it looks like a botanical garden inside of a glass house. They look up into a tree, and see Burgh feeding a leaf to a Sewaddle. Burgh jumps down from the tree, and welcomes them to the Gym. Ash wants them to get started with the Gym battle right away. Cilan says that there certainly a lot of trees inside of the Gym, as Burgh says that he moved some trees from the Pinwheel Forest so that the Bug Pokémon would feel comfortable in the Gym. He says that Bug Pokémon really love a green environment, and that their inspirations will definitely bloom. Burgh asks Ash what type of mood he is in, as Ash says that he is in a perfect mood and that he will get his third badge. Burgh says that he looks forward to what type of battle Ash will bring. Burgh gives a cue, as the floor opens up, and the battlefield appears.

The referee says that it will be a 3-on-3 battle, and only the challenger can substitute their Pokémon. Burgh says that since he is the Gym Leader, he is going to reveal his Pokémon first. Burgh brings out Dwebble, as Iris says that the rock on its back looks different than Cilan's Dwebble. Iris wonders what type of Pokémon Ash will use against Dwebble, who is a Rock/Bug Type Pokémon. Ash brings out Tepig to battle, as Iris says that he is starting out with a firm plan.

Cilan says that attacking with Rock Wrecker at close range is a highly effective tactic. Iris asks him if he means that Burgh was luring him in. Cilan says that Burgh was waiting for Tepig to come in close enough, so that Dwebble could attack. He says that it is what is expected from Burgh. Iris asks if Ash has any other Pokémon that can match up against Dwebble. Cilan says that Ash could either use Oshawott and his Water Type moves, or Pikachu with his Iron Tail attack. Ash decides that he is going to use a Bug Type to go up against another Bug Type, as he brings out Sewaddle for battle. Cilan and Iris are shocked, as Iris says that he is not being precise. Cilan says that is just how Ash is. Burgh notices that it's the same Sewaddle before, and that his Leavanny made the leaf clothing for it. Ash thanks Burgh for doing that before. Burgh says that it looks good on Sewaddle, but it won't stop him from tearing the leaf clothing to shreds. He says that they have to set aside their personal sentiments in a Gym battle. He says that maybe Sewaddle did get stronger, and that he is looking forward to what it can do. Iris wonders if Ash is at a disadvantage, since Burgh knows his Pokémon. Cilan says no, and that Burgh has not seen Sewaddle battle yet.

Cilan says that Dwebble's Protect is definitely a problem. Dwebble uses Rock Wrecker again, while Sewaddle uses String Shot to wrap around the rock to stop it. Dwebble uses X-Scissor, while Sewaddle uses tackle to land a hit and send it to the ground as it comes out of its shell. Sewaddle uses Razor Leaf to land a hit on Dwebble. Burgh tells Dwebble to get back to its rock, as Ash says that he won't let them. Sewaddle hits Dwebble with Tackle, and then knocks it out with Razor Leaf. Burgh compliments Sewaddle, and then brings out his Whirlipede. Ash scans Whirlipede with his Pokédex. Burgh asks Whirlipede if its pure heart is burning brightly, as it rolls in place to say yes. Iris and Cilan notice that it's another mismatched opponent. Cilan says that Whirlipede is a Bug/Poison Type Pokémon. Iris asks what Pokémon would match against those types. Cilan says a Flying Type, but Iris says that Tranquill was just send over to Professor Juniper's lab. Cilan says that a Fire Type Pokémon would also work. Iris says that Ash already sent out Tepig awhile ago, and that this battle will be a tough one. Ash tells Sewaddle that he's counting on it.

Swadloon uses String shot to wrap up Whirlipede, but Whirlipede rolls around to break free of it. Burgh compliments Swadloon on its tying abilities. Swadloon tries to use String Shot at the ceiling to use it to dodge, but Whirlipede breaks the string with Steamroller. Swadloon lands on its back, as Whirlipede's Steamroller becomes stronger and glows, as it heads towards Swadloon. Ash tells Swadloon to use its new power and commands it to use Energy Ball. Swadloon uses Energy Ball to hit Whirlipede. Iris is surprised that it now knows Energy Ball. Cilan says that now that it has evolved, Swadloon is showing a new flavor. Swadloon uses Tackle to knock out Whirlipede. Cilan wonders who Burgh's last Pokémon is going to be. Burgh brings out Leavanny, who he calls the Gym's Guardian. Ash knew that Leavanny would be Burgh's last Pokémon.

Meanwhile, at the harbor of Castelia City in a warehouse building, Team Rocket is trying to contact Giovanni. Matori tells them that Giovanni is in a meeting and cannot be bothered right now. James mentions that Giovanni was also in a meeting yesterday. Matori tells them that Giovanni is currently very busy, as Jessie asks her if he has said how they can be of service to him at the moment. Matori tells them to do as the please for now, all for Team Rocket as she signs off. Team Rocket is unsure of what she means by that, as Meowth feels as though Giovanni has abandoned them. Jessie says he has high hopes for them instead. Meowth says that they will meet his expectations and get Pikachu and present it to him. Team Rocket throws off their business clothes so that they wear their normal white uniforms, as they recite their Team Rocket motto. Jessie says that they will definitely capture Pikachu and give it to Giovanni, as they all cheer.

After they cheer, a Yamask floats by and looks down at a box that Team Rocket has on the floor. Jessie thinks it's a good idea to have Yamask join Team Rocket, as she brings out Woobat to battle. James stops them, as he says that Yamask appears to be hungry. James hands Yamask a container of Pokémon food, and tells it to eat as much as it wants to. Afterwards, Yamask is down on the ground and is full. James asks Yamask to join their side, as Yamask agrees to. James puts a Poké Ball in front of Yamask, as Yamask sets it off to be captured easily. They celebrate that James caught a Yamask and that it is on their side.

Back at the Gym, Swadloon uses Energy Ball, while Leavanny uses Protect to block the attack. Leavanny uses String Shot to wrap up Swadloon, as Ash tells it to fire Razor Leaf at itself. Iris is shocked that he is having Swadloon do that. Swadloon uses Razor Leaf on itself to free it from String Shot. Iris says that Ash is getting a bit carried away, as Cilan says that it's just how Ash is. Burgh says that they took a risk by doing that since they also took damage from it, as he says that Ash has a gutsy heart. Leavanny hits Swadloon with Leaf Storm, and knocks it out with Hyper Beam.

After Ash returns Swadloon to its Poké Ball, Cilan and Iris wonder what Pokémon Ash is going to use last. Oshawott comes out of its Poké Ball and volunteers, as it touches its scalchop and it drops. Oshawott picks the Scalchop back up and puts it back, as Pikachu also volunteers to battle. Ash decides to go with Pikachu, as Oshawott is crushed and falls over after it turns white. Ash tells Oshawott that maybe he'll be used next time, as he returns Oshawott to his Poké Ball. Burgh says that it's true that Pikachu are rare amongst the Unova Pokémon, but with it being a Gym, it doesn't matter what Pokémon the trainer holds. Burgh says that he knows the weaknesses of many Pokémon, as Ash says that compared to others, his Pikachu is quite different. Cilan says that Pikachu is Ash's number one Pokémon.

Leavanny uses Leaf Storm and Ash tells Pikachu to spin and dash forward, as Pikachu spins and gets hit by the attack. After an explosion, Pikachu is able to shake off the threads and move his tail again. Burgh says that Ash's risky strategies really surprise him. Leavanny uses String Shot to try and immobilize Pikachu again, but Pikachu uses Quick Attack to dodge the attack. Iris exclaims that Pikachu's speed is back. Leavanny uses String Shot, while Pikachu uses Thunderbolt to block the attack. Cilan says that Pikachu's aim is back on as well. Pikachu uses Iron Tail to hit Leavanny, and then uses Electro Ball to knock Leavanny out.

Ash wins the Gym battle. Cilan says that the battle was very spicy and full of surprises. Burgh says that Ash seemed like a tough challenger to begin with and congratulates him by handing over the Insect Badge. Ash and his Pokémon celebrate that he won the badge, as he places the badge in his badge case. Iris says that she was worried during the battle, as Cilan says that he brings out a new flavor every day. Burgh tells him that it was a spectacular victory and to keep it up for the upcoming Gym battles as well. As the sun sets, Ash and his friends say goodbye to Burgh and continue their journey through the Unova Region. 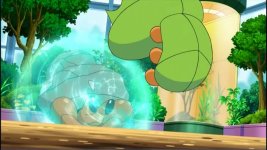 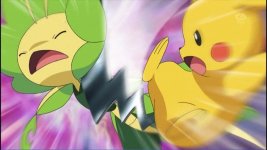