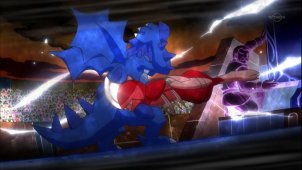 The episode begins with a recap of the battles from the previous episode. The announcer makes the comment that the battle between Burgundy's Dewott and Iris' Excadrill is about to begin. Cilan comments that he is looking forward to seeing how much Burgundy's battles have ripened and gotten better. Ash expects Iris to win and tells her to do her best. Burgundy comments that her only rival is Cilan, and that Iris will face a bitter defeat. Iris says that she will win the championship, but first she must defeat Burgundy. Burgundy says that she will show Pokťmon moves that a Pokťmon Connoisseur recommends. Dewott begins by using Ice Beam, while Excadrill dodges. Ash is very surprised that Dewott knows Ice Beam. The Ice Beams create a couple of ice pillars, and Burgundy comments that she won't let Excadrill get away. One of Dewott's Ice Beams hits Excadrill, freezing parts of its arms. Excadrill breaks free of the ice by spreading his arms. Cilan says that Dewott has grown a lot and that Iris and Excadrill may struggle against it.

Georgia comments that they can continue to struggle, but all she cares about is that Iris wins so that they can face each other and Georgia would defeat her. Bianca starts poking Scraggy, looking for muscles on its body. Ash tells Bianca that she needs to stop it, but she continues and Scraggy headbutts her. Bianca hits the ground hard after being headbutted. Ash asks Bianca if she is okay. Meanwhile, Dewott uses Water Pulse, while Excadrill uses Dig to get away. Dewott sends a Water Pulse into the hole, which brings Excadrill out of the ground since it cannot stand water. Everyone is shocked to see that happen. Burgundy says she will now show their perfect marriage as Dewott uses Razor Shell, while Excadrill uses Focus Blast which sends Dewott to the ground. Dewott looks completely exhausted after hitting the ground. Stephan comments that it will be a tough battle for Excadrill since it is weak against Water Type attacks. Ash agrees with him as he pronounces his name wrong. Trip takes pictures of the battle going on, says that he knows the Pokťmon's strength, that it would be pointless to watch, and then leaves the stadium. Masaomi says that the battle is boring to him, and that neither of them will be able to stand up to him.

Burgundy says to Iris that her battling is very bad, and that she will win. Iris says the same thing back. Excadrill uses Drill Run, while Dewott blocks the attack and holds it back with its shells. The Drill Run knocks the shells away, Dewott goes to the ground, and Excadrill is sent into the ground. Excadrill jumps out and uses Metal Claw, while Dewott blocks the attack with its arms. Burgundy tells Dewott to stand its ground while being attacked. Excadrill continues to use Metal Claw, while Dewott continues to block with its arms. Georgia comments that Burgundy has grown up a bit, and makes her a strong opponent for Georgia. Cilan wonders why Dewott isn't fighting back. One of Excadrill's Metal Claw attacks knocks Dewott to the ground. Iris comments that even though Metal Claw isn't very effective against Dewott, it was done multiple times. Burgundy says that Iris should replace all of her Pokťmon, and that Excadrill still won't be able to defeat her. Dewott uses Revenge, which hits Excadrill and sends it crashing to the ground. Everyone is surprised, as Cilan says that now he knows what she was planning. Iris tells Excadrill to hang in there and not give up.

Burgundy says to Iris that she should just give up and replace her Pokťmon. She says that with Dewott learning Revenge to take revenge on Cilan, she has her first victory. Bianca is confused about what she means by revenge for revenge. Don George explains that Revenge doubles in power if the Pokťmon is dealt damage in the same turn by the opponent. Dewott picks up its shells to do Razor Shell, while Excadrill counters with Drill Run as both attacks collide. Both Pokťmon are sent flying but land safely back onto the ground. Iris exclaims that her Excadrill isn't weak. Excadrill uses Focus Blast, while Dewott uses Ice Beam. The Focus Blast breaks through the Ice Beam and hits Dewott, sending it to the ground while Burgundy is upset. Excadrill uses Dig, as Dewott gets up while being very exhausted. Excadrill lands Dig, and then uses Drill Run to send Dewott to the ground hard, knocking it out. Georgia comments that the outcome was obvious, since she'll be the one to defeat Iris in the end. Cilan says that Burgundy has improved her skills a lot, but need just a bit more to win. The announcer says that Iris is moving onto the second round. The fourth match of the first round is now over. Don George tells everyone that the next match will be later on in the day, and that trainers should now eat lunch in the Pokťmon Center.

At the Pokťmon Center, Burgundy isn't really upset with the loss, since she didn't lose to Cilan. She says that the next time they meet, she won't let Cilan do his arrogant tastings. Cilan says that he is looking forward to her growth the next time they meet. Burgundy tells Iris that she will get revenge on her as well. Georgia says that she will be the one to take down Iris, and with that win the championship. Iris says that Georgia would have to get passed the first round first. Ash asks Trip if Bianca is his first round opponent, and Trip comments that Ash should be worrying about his own Pokťmon instead. He says that Scraggy may have looked like it learned Focus Blast, but it hasn't mastered it yet. He adds that it isn't accurate, so Focus Blast is worthless. Ash decides to train with Scraggy to work on his Focus Blast.

Scraggy uses Focus Blast while aiming for a target, but instead it hits the large rock, as Ash and Pikachu are surprised and Scraggy is upset. Ash says that it only missed by a little bit, and that Scraggy should try again. One Focus Blast slides across the ground, one goes above a rock wall and almost hits Ash, Pikachu, and Scraggy, and three more completely miss the target to the left, right, and above it. Scraggy becomes very frustrated with himself and disappointed. Ash tells Scraggy that they can't battle with it until they practice more with Focus Blast. Stephan shows up and says that they will help Scraggy perfect Focus Blast, since they need to practice for the second round as well. They get ready to practice with a battle, when Bianca shows up to check out Sawk's muscles as she says that she could give Sawk a massage. Ash, Scraggy, and Pikachu watch with puzzled looks on their faces, while Bianca also checks out Stephan's muscles. Bianca says that Stephan is the top macho Pokťmon of the tournament while saying his name wrong, as Stephan says that he's not even a Pokťmon.

Iris and Cilan run over to everyone and tell Ash that the second round matches are starting soon. Ash says to Stephan that the training will have to wait, as Bianca and Ash head over to the stadium. Sawk punches the punching bag, as Stephan and Sawk also head over to the stadium. As the bag is moving back and forth, Masaomi is shown watching in the background the whole time. Throh picks up the punching bag, throws it into the air as it breaks open while hitting the ground. Back inside of the stadium, Simipour uses Low Sweep on Simisear to knock it out. Bakkie moves on to the second round. The announcer says that the next battle is between the beautiful crusher Grace, and the majestic dragon buster Georgia. Georgia comments that since Druddigon is a Dragon Type, the battle is going to be where they can truly show their skill. Georgia yells to Iris that she is looking forward to facing her in the next round. Iris says that she hasn't even made it passed the first round yet, and that she is a child.

Druddigon uses Dragon Claw, while Bisharp blocks, and follows it up with Dragon Tail while Bisharp dodges it. Bisharp uses Metal Sound, which really hurts Druddigon's ears. Bisharp uses Iron Head to knock out Druddigon. Georgia moves on to the second round. Ash comments that Bisharp has really become strong since it evolved from Pawniard. Cilan comments that the battle had a nice combination of attack and defense. Iris says that she will not lose in the second round. Masaomi is announced as the wizard who makes people nag, uses a Throh and is a black belt; is going up against a hot-head who whips up storms with precise targeting named Domon. Ash looks up Mienshao with his Pokťdex. Stephan comments that he is looking forward to how Masaomi and Throh battles, and that they will watch the battle closely.

Mienshao uses Pound several times, while Throh dodges every one of them. The announcer calls Throh very frightening, and has fast reflexes to dodge. Mienshao uses High Jump Kick, while Throh uses Superpower to throw it into the air. Throh jumps high into the air to grab Mienshao, and throw it down to the ground with Seismic Toss. Throh uses Circle Throw to throw Mienshao against the wall while knocking it out. Everyone looks on as they are all very shocked and amazed by what they just saw. Don George proclaims that Masaomi is now the front-runner to win the tournament after seeing that battle. Masaomi moves on to the second round. Masaomi looks back at Stephan and introduces his name, as Stephan says that he wants to fight Masaomi even more now. The final match of the first round is announced. Trip is called the genius who has great observation skills. Bianca is called the Beret girl with an Emboar. Bianca runs into the stadium very late because she was touching Mienshao's muscles, as she trips over herself to the ground with Emboar unable to catch her. Iris asks if Bianca can battle after falling to the ground and is all riled up. Bianca tells Trip that his Conkeldurr has nice muscles as well, but she has to treat the battle as a serious one. Trip says that he doesn't think the battle will go well for her.

Emboar uses Arm Thrust, while Conkeldurr uses its concrete pillars to block the attack. Cilan says that using the pillars was a great way to block it. Emboar uses Hammer Arm, but again Conkeldurr blocks it with his pillars and sends Emboar back. Emboar uses Flamethrower, while Conkeldurr swings the pillars to block it. Don George says that as long as Conkeldurr has the pillars, it cannot be hit. Emboar looks tired, as Bianca tells it to hang in there. Conkeldurr uses Bulk Up to raise its attack and defense, as it moves in to use Strength. Georgia is wondering if it'll use the pillars to attack, and Burgundy says that she hasn't seen that before. Emboar jumps into the air to dodge Strength, but Conkeldurr also jumps into the air and knocks Emboar hard into the ground. Everyone looks on with nervous faces as Emboar hit the ground. Emboar slowly gets up, as Bianca tells it not to give up.

Conkeldurr puts down the pillars and uses Rock Tomb, which breaks up and surrounds Emboar. The rocks have trapped Emboar inside, as it is unable to break free by using its Arm Thrust over and over. Emboar stops using Arm Thrust after becoming exhausted. Conkeldurr uses Stone Edge to try and finish off Emboar, as the episode ends on a cliff hanger. 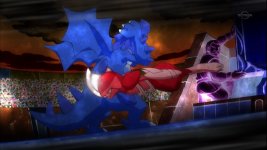 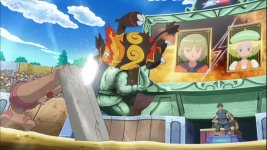