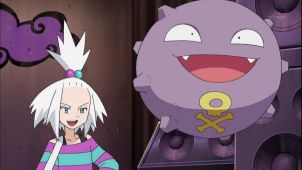 The episode begins at night, with Ash and his friends headed to the Pokémon Center to rest before Ash's Gym match the next day. Meloetta continues to follow them. A Gym challenger runs into them, as he runs into the Pokémon Center. They enter the Pokémon Center, as Audino brings Watchog and Swanna into another room to have them treated. The trainer tells Ash that Roxie is a very powerful Gym Leader that uses Poison Type Pokémon. He says that he didn't stand a chance against her. Other Gym challengers tell Ash the same thing, and that one of her Pokémon took out all of theirs. Ash realizes that he must think of countermeasures to use against Poison, as he thinks about which Pokémon he should use. They decide to eat dinner first before strategizing.

Meanwhile, Team Rocket informs Dr. Zager that they lost Meloetta, as they tell him that they didn't know that it could become invisible. Dr. Zager says that he will send them special goggles to use to find it. Ash runs and heads to the Gym, as Cilan and Iris run after him. They arrive at the Gym, as it looks like a very old building. They enter the Gym and go down the stairs, as they notice that the Gym is underground. They enter the battlefield, as they see the ending of a battle between Roxie's Koffing and a Gym challenger's Gothitelle. After the battle, Roxie and her band play very loud music, as it hurts Ash and his friends' ears and the crowd cheers. The challenger checks on his Gothitelle, as everyone gives a round of applause for his effort. Roxie tells him to come back and challenge her again.

The challenger returns Gothitelle to its Poké Ball, thanks Roxie for the battle, and runs off to the Pokémon Center. Roxie introduces herself to Ash, as the crowd angrily stares at him. Roxie says that Koffing is her favorite Pokémon, and that she got it at a live concert in the Kanto Region. Ash scans Koffing with his Pokédex. One of her band members say that Kanto's fans weren't as upbeat as the ones in Unova. Roxie says that her band is called The Koffing, and that they have live performances and battles on the battlefield. She says that the crowd loves both concerts and Pokémon battles.

Ash's Pikachu uses Thunderbolt on the scoreboard, as it shoots off sparks. Roxie is impressed that Ash was able to quiet down the crowd. Ash tells Roxie that he is going for his eighth badge, as he shows her his badge case that now holds seven badges. Roxie suggests to him that they have a six on three battle, with her using three Pokémon and Ash using six Pokémon and only Ash will be able to substitute his Pokémon. Ash is hesitant since he would have an advantage, but agrees to the six on three battle. The band plays music, as the referee announces the rules of the battle. Roxie chooses Koffing, as Ash notices how fast it can move. Ash brings out Boldore to battle first, as the scoreboard displays their Pokémon.

Ash brings out Leavanny to fight next, which surprises everyone. Leavanny uses Energy Ball to hit Koffing, as Koffing has green sparks surrounding it. Koffing uses Gyro Ball, while Leavanny uses String Shot to stop Koffing in its tracks. Koffing tries to use Sludge Bomb, as Leavanny spins it around. Leavanny brings Koffing in close, and uses Energy Ball to knock it out. Roxie is impressed, as she returns Koffing to its Poké Ball. Roxie brings out Scolipede to battle next, while Ash decides to stick with Leavanny. Leavanny uses Razor Leaf to hit Scolipede, as it does very little damage to it. Scolipede uses Toxic on Leavanny to Poison him, as the episode ends on a 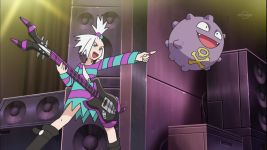 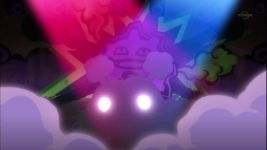