All For The Love of Meloetta! 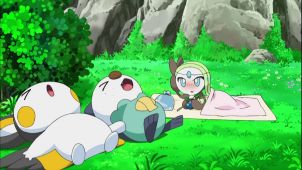 The episode begins with a recap of Ash's Gym battle with Roxie in the previous episode. Ash and his friends talk to Nurse Joy at the Pokémon Center about the Unova League, as she tells them that it won't start for three months. Ash decides to train his Pokémon until then, as Cilan suggests that they have Beartic ice cream first. They decide to go eat the Beartic ice cream first before training. They see Cynthia at the Beartic ice cream stand, as Cilan and Iris introduce themselves to her. Iris is too nervous to say something to her at first. Cynthia says that she is headed to East Unova for the Pokémon World Cup Junior Tournament. She says that anyone can enter the tournament, and that she was invited to have an exhibition match there. Cynthia says that the winner of the tournament gets to battle Alder, as Ash, Cilan, and Iris decide that they will enter the tournament.

Team Rocket uses special goggles to spot Meloetta, as Jessie brings out Woobat and James brings out Yamask to attack. Woobat uses Air Slash and Yamask uses Shadow Ball on the bushes, as Meloetta appears. Meowth launches an electric net at Meloetta and it misses, as it brazes and shocks Meloetta. Meloetta tumbles down the mountain, as Team Rocket loses sight of it. Ash and his friends are driving, as Meloetta steps in front of the car. They come to an abrupt stop, as Meloetta collapses. Cynthia says that it is an extremely rare Pokémon, as Ash recognizes Meloetta from when he saved her in Pokéwood. Iris and Cilan head off to find an Oran Berry, while Cynthia and Ash head off to make an ice bag.

Cynthia brings out Glaceon to use Ice Beam, as Cynthia and Ash break the ice to make an ice bag. Ash places the ice underneath Meloetta's head and wipes her forehead with a towel. Cynthia receives a phone call, as she heads back to Virbank City and leaves Ash to take care of Meloetta. Oshawott comes out of his Poké Ball, as he falls in love with Meloetta. Ash leaves to grab more ice, as he leaves Oshawott to look after Meloetta. Cilan and Iris continue to look for Oran Berries, as they find an Oran Berry tree on top of the mountain. Iris brings out Emolga, as she tosses her up to the tree to grab an Oran Berry. Emolga grabs an Oran Berry and lands on Iris' head. She heads toward Meloetta, as Cilan and Iris go up to Ash. He tells them that Cynthia's Glaceon used Ice Beam on the water, and he's gathering ice.

Emolga flies over to Meloetta, as a gust of wind sends her into Oshawott which knocks them down. Meloetta grabs the Oran Berry and moves away, as Oshawott and Emolga begin to fight and yell at each other. Ash and his friends show up and try to stop their fighting, as Meloetta uses Relic Song. Ash and his friends like the song, while Cynthia returns and also likes the song. Oshawott and Emolga stop their fighting and also like the song. Cynthia says that Meloetta's singing calms people's feelings. Cynthia says that the reason she had to leave was because she forgot her change at the ice cream stand. Iris asks Cynthia to have Axew battle her Garchomp, as Cynthia accepts the challenge. Team Rocket locates Meloetta again, as they run toward the location.

Cynthia and Iris have a one-on-one battle, as Iris chooses Axew and Cynthia chooses Garchomp. Axew uses Scratch on Garchomp, and then uses it on Garchomp again. Garchomp shakes off the attack. Garchomp hits Axew with Dragon Rush, and then hits Axew with Draco Meteor, as only one of the meteors hit Axew. Axew is able to get up, as he glows, jumps and uses Giga Impact on Garchomp to knock it down. Garchomp comes in with Brick Break, as Cynthia has it stop its attack. Cynthia and Iris decide to end the battle. Ash and his friends head toward the plane to go to East Unova, as Team Rocket continues to look for Meloetta. They see Ash and his friends boarding the flying boat, with Meloetta following behind them. They decide to try and make it to East Unova before Ash and his friends. 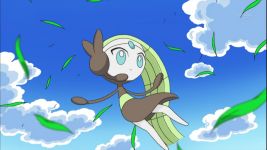 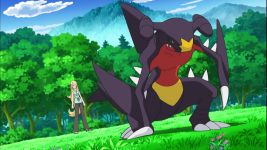