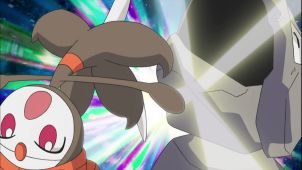 The episode begins with Ash training Oshawott. Oshawott uses Water Gun on a target, as Ash says that he needs to get stronger if they are going to win the tournament. Iris is training her Axew and Excadrill, with them battling each other. Meloetta watches everyone train. Dawn tells them that they should take a break, as she tells them about a deserted island that is home to a very rare Onix. Everyone is very excited, as Ash says that they have to train first. Dawn says that they will get good luck if they find the very rare Onix. Ash shows Iris Onix's Pokédex entry. Everyone decides to go to the island. Ash is excited, as Iris and Dawn both call him a kid. Meloetta approaches Ash and his friends, as Piplup and Oshawott fall in love and get mad at each other.

On the boat, Ash asks Jeremy if he knows anything about the rare Onix. Jeremy says that there are several Onix groups that live on the island. They see a Staryu jump over the boat, and a Wailord in the water. Team Rocket flies over the ocean, as they get ready to send a device into the ocean. Ash and his friends arrive at the island, as Axew falls while going onto the beach with Meloetta picking him up and Piplup is wearing an inner tube. Jeremy warns Ash and his friends to be very careful on the island. The Pokémon play in the beach with a sand castle. Oshawott chases a Krabby, and then Oshawott runs around after being pinched by it. Piplup is picked up by the head by Kingler, as Piplup and Oshawott run away from Krabby and Kingler. Dawn shows Iris Krabby and Kingler's Pokédex entries.

Cilan cooks lunch, as everyone else plays around on the beach and in the water. Piplup and Oshawott are very exhausted after dealing with Krabby and Kingler. Dawn and Iris splash each other, Oshawott and Axew swim in the water with Piplup floating in the water, Pikachu surfs on a wooden board in the water, Ash dives underwater to look at the different Water Pokémon, Meloetta sits on a rock while looking out at the ocean, Piplup swims up to Meloetta and Oshawott hits him with Water Gun and laughs, Piplup hits Oshawott with Hydro Pump and they get mad at each other, and waves take them away with Pikachu surfing on the waves.

As they are eating lunch, Dawn says that Cilan's cooking can compare to Brock's cooking. Ash says that Brock used to do the cooking for them, as Dawn says that he is now studying to become a Pokémon doctor. Oshawott and Piplup take Pokémon food to offer to Meloetta, as they get mad at each other and begins fighting with each other. Pansage pulls on Oshawott, Axew pulls on Axew, and Pikachu tries to get them to stop fighting. After they finish eating, they head toward a cave. Ash says that Onix live in caves, as Dawn and Iris both call him a kid. Ash enters the cave first, as several Woobat fly passed him and he falls to the ground. Iris and Dawn walk by, as they call Ash a kid again.

They walk through the cave, as the ground shakes and an Onix appears and they run out of the cave with it chasing after them. Dawn, Iris, and Axew get separated from the others. Dawn realizes that Piplup is not with them, as she wonders if he is with Ash and the others. They go back into the cave, as the Onix scares them off again. Dawn and Iris head back toward the beach. Ash and Cilan notice that they have been separated from Iris and Dawn, as Oshawott tries to comfort Piplup. Piplup knocks Oshawott's hand away, as they get mad at each other with Pikachu trying to separate them. Ash says that they should head back to the cave, as Cilan says that they will have to be careful. Ash wants to continue searching for the rare Onix, as Cilan says that they should head back to the beach first and come up with a plan.

Ash and Cilan head toward the beach, as they see a hole in the ground and an Onix comes out of the ground. Oshawott uses Water Gun and Piplup uses BubbleBeam, as the attacks hit Onix and it goes back underground. Piplup and Oshawott get mad at each other again and Meloetta disappears, as they turn around and notice that Meloetta is gone. Three more Onix appear out of the ground, as Oshawott uses Water Gun and Piplup uses Bubble Beam with the Onix dodging the attacks. Onix charge in to attack, as Meloetta appears and uses Relic Song. Meloetta changes into its Pirouette Form, and then uses Close Combat on the Onix. The Onix go back underground, as Meloetta changes back into its Aria Form. Oshawott and Piplup fall in love with Meloetta again.

Dawn and Iris appear at a dead end in front of a mountain, as they both want to go in different directions. They head into the direction that Dawn suggested, as they find another dead end. They want to go in different directions again, as this time they go in Iris' direction. They end up at the end of a cliff over the water, as a Magnemite floats by. Iris grabs Magnemite, as it uses Thunderbolt to shock her and mess her hair up. A Foongus comes over to them, as Dawn touches it and it uses Stun Spore on her to paralyze her. Dawn and Iris go up a tree, as they swing on vines. The vine breaks, as Dawn lands in bushes and Iris lands on her feet on the ground. An Onix comes out of the ground, as it chases after them.

Ash and Cilan come to what they think is a dead end, as Pikachu touches the rocks with his tail. The rocks are shown to really be several Onix, as they begin chasing after Ash and Cilan. Ash, Cilan, Iris, and Dawn all run away from the Onix, as they end up going toward each other and are surrounded. Dawn and Piplup hug each other after being reunited. Everyone runs away from the Onix, as they come to another dead end with the rocks being real rocks this time. The Onix attack, as Oshawott hits them with Water Gun and Piplup hits them with BubbleBeam. Oshawott hits them with Aqua Jet and then has spirals on its eyes, as Piplup uses Headbutt and then also has spirals on its eyes.

A Wailord jumps out of the water, as they see a rainbow in the sky. Piplup and Oshawott knock each other down while each of them try to sit next to Meloetta. They keep getting mad at each other, as Meloetta sings the Relic Song. Everyone says that the song makes them think about their hometown. As the episode ends, Team Rocket hears the last part of the song and sends a device into the ocean and says that they are doing it for Giovanni. 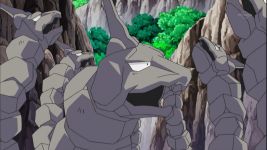 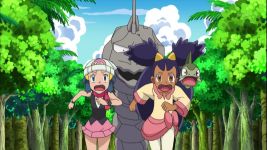