The Mystery of the Missing Cubchoo!! 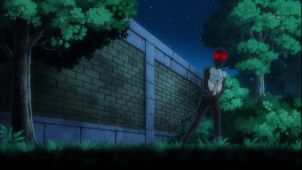 The episode begins with Ash having a practice battle with Dawn outside of Cynthia's Villa. Ash is using Pignite, while Dawn is using Mamoswine. Pignite uses Tackle on Mamoswine, as Mamoswine pushes him backward. Mamoswine uses Take Down to hit Pignite. Mamoswine uses Hidden Power, while Pignite jumps to dodge the attack. Pignite uses Flame Charge to send Mamoswine backward. Mamoswine uses Ice Shard and Pignite uses Flamethrower, as both attacks collide. Mamoswine charges forward with Take Down and then uses Hidden Power, while Pignite charges in with Flame Charge. Both attacks create an explosion, as both Pokémon are down when the smoke clears. Cilan declares the battle a draw. Ash returns Pignite to his Poké Ball, while Dawn returns Mamoswine to its Poké Ball.

Piplup wants to battle next, as Cilan suggests that they take a break. As they are taking a break, Chris appears while calling out for his Cubchoo. Jeremy says that Chris lives in the area, as Chris asks everyone if they have seen his Cubchoo. Dawn looks up Cubchoo in her Pokédex, and says that she hasn't seen it. Chris says that his Cubchoo has disappeared, as Ash and his friends decide to help him search for his Cubchoo. Ash and his friends introduce themselves, as Chris does the same. Piplup says that he'll help, as Oshawott comes out of his Poké Ball and also wants to help. Meloetta floats to them, as Piplup and Oshawott fall in love with it.

Ash and his friends help Chris search for his Cubchoo, as they have no luck finding it. Cilan asks Chris to tell them more about Cubchoo's disappearance. Chris says that Cubchoo lives in a Pokémon House near his home, as he explains that it's a house that is only for Cubchoo. He says that Cubchoo has always lived there, but now has disappeared. Chris shows Ash and his friends the Pokémon House, as they see a mansion next to it. They walk inside, as Piplup and Oshawott slide down the slide. Dawn tells them that they can't play without permission. Iris says the same to Axew, as he swings on a tire swing.

Chris says that he played with Cubchoo before it went to bed, as he had locked the door and went home. He says that he came back to check on Cubchoo, but it was gone. He says that the door couldn't have been opened from the inside. He says that there is no other entrance to the room, as Cilan does his Detective Time ritual which Iris finds annoying. Cilan asks Chris questions, as Cilan thinks that it may have been a crime that was committed. Dawn wonders if Cilan is always like that, as she says that Brock was very tiring as well when he would chase after girls. Cilan says that his first theory is that a person went into the house and stole Cubchoo. Chris says that it isn't possible, since they have an alarm system.

Chris shows everyone the cameras, as Cilan says that the only way someone could enter is through an underground hole. He crawls on the ground, and searches for clues with his magnifying glass. He finds footprints, as he follows them to a hole in the wall. He says that it could be what the kidnapper used to escape. Piplup, Ash, and Pikachu are able to get through the hole, as Cilan says that it has been used many times. Iris and Dawn are getting annoyed by his Detective Time ritual. Everyone else goes to the other side of the wall, as they head into the forest. A Joltik appears in front of Oshawott and Piplup, as Piplup pushes it away and Joltik uses Electro Web on them to shock them. Piplup and Oshawott push and argue with each other, as Meloetta uses Relic Song to stop their fighting. Ash tells Chris that Meloetta can soothe the hearts of people with her singing.

Cilan finds more footprints of a Pokémon, as he thinks that it's of the Pokémon that took Cubchoo. Axew shows them some apple peels that the Pokémon was eating. Cilan says that the Pokémon who left the footprints also ate the apples. Iris finds where the apple peels came from, as Ash and his friends head in that direction. Meanwhile, Team Rocket checks the progress of the censor that they let go into the ocean, as they continue to track it. Ash and his friends find a Beartic that is eating the apples, as they run away from it in fear. They notice that it isn't attacking them. They think that maybe Beartic was the one who took Cubchoo.

Cilan theorizes that since Beartic saw Cubchoo as a friend, it entered the Pokémon House and took Cubchoo while it was still sleeping. He realizes that it may not be possible since it cannot fit through the hole. Cilan says that they must ask Beartic about it. Cilan and Chris ask Beartic what happened to Cubchoo, as Beartic throws the apple peel to the ground. Cilan says that they have to keep searching for Cubchoo. They keep searching for Cubchoo, as they ask Beartic again where Cubchoo is. Cilan says that Beartic definitely knows something. Beartic's nose begins to run. He theorizes that Cubchoo exited the Pokémon House after Chris forgot to lock the door, as it crawled through the hole and got lost in the forest. A Pokémon attacked it and Cubchoo evolved into Beartic.

Cilan tells Chris that Beartic is his, as Dawn suggests that he try to return Beartic to its Poké Ball. Chris tries to return Beartic to its Poké Ball, but it doesn't work. Cubchoo and Larvitar run back and forth, as Chris realizes that the Cubchoo is his. Cilan theorizes that Larvitar is the one who took Cubchoo out of its room. He says that Larvitar went to the Pokémon House frequently, and became friends with it. During nightfall, it opened Cubchoo's door and they went together outside, through the hole, and into the forest. Cilan says that the mystery is solved, as Dawn and Iris find it very annoying. Cilan becomes upset about them finding it annoying. Ash suggests that they have a Pokémon battle, as he tells Chris that it makes Pokémon stronger.

Larvitar agrees to battle, as Ash brings out Scraggy to battle it. Scraggy goes up to Cubchoo, as Ash tells him that Larvitar is his opponent. Scraggy and Larvitar stare each other down before the battle. Dawn is the referee, as Chris and Cubchoo watch the battle. Scraggy hits Larvitar with Headbutt, while Larvitar uses Bite on Scraggy's arm. Scraggy pushes Larvitar away and uses Hi Jump Kick, while Larvitar dodges the attack and Scraggy gets hurt. Cubchoo cheers Larvitar on. Larvitar hits Scraggy with Sandstorm. Scraggy uses Focus Blast to hit Larvitar, while Larvitar uses Hidden Power to hit Scraggy. The match ends in a draw, as Cubchoo wants to battle next. Ash tells Chris that for them to have a lot of battles, they must travel.

Cilan is revealed to not have watched the battle, since he was too upset about being called annoying. Chris decides that he will train with Cubchoo and Larvitar after catching it, and then go on a journey. Cilan says that Cubchoo won't be alone with Larvitar around. As the sun sets, Chris thanks Ash and his friends for their help, as they say goodbye and wish him luck. Team Rocket finds what they were looking for, and sends the images to Dr. Zager. 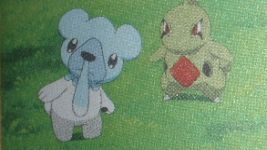 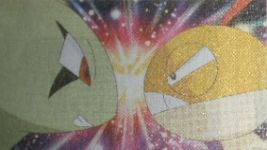