Iris and the Rogue Dragonite! 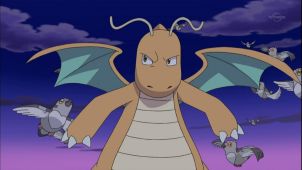 Dragonite comes out of the water with an injured wing, as it flies into part of the power plant, destroys it, and sets off an alarm. Several Magnemite appear, and get ready to attack Dragonite. At Cynthia's Villa, Dawn is blow drying her hair and brushing it, as she tells Iris that appearance for a Coordinator is very important. As she is drying her hair, the power goes out. Jeremy tells Cilan that it is caused by a power outage. Officer Jenny arrives at Cynthia's Villa, as she says that Cynthia is in Lacunosa Town. Jeremy says that she has gone there to get ready for the Tournament. Officer Jenny informs them that Dragonite attacked the power plant and destroyed it. Dawn looks up Dragonite in her Pokédex.

At the power plant, several Magnemite use Thunderbolt on Dragonite, while Dragonite uses Flamethrower and they dodge the attack. Dragonite flies away, as the hallways are shown from Dragonite's eyes. Dragonite enters the control room, as it uses Thunderpunch to put obstacles in front of the doorway and uses Ice Beam to freeze them. Officer Jenny shows up, as she says that they must get Dragonite away from the power plant so that they can fix it. Dragonite collapses from the pain of its wing injury. Officer Jenny finds an air vent, as they realize that they won't be able to fit through it. Ash and his friends show up at the power plant, as Iris asks to enter and talk to Dragonite so that she can bring it out.

Ash tells Officer Jenny that Iris is from the Village of Dragons, and that she wants to become a Dragon Master. Officer Jenny has Magnemite show them the way to the room with Dragonite, as she hands Ash a Poké Ball to capture Dragonite and says to use it if they don't succeed with talking to Dragonite. Ash says that they won't need it, and that Iris will be able to succeed with getting Dragonite out. Ash and Pikachu enter the air vent, as Cilan tries to enter it but the vent is too small for him. Dawn and Piplup crawl through the air vent. As they are crawling through the air vent, Dawn asks Iris if she will be able to get through to Dragonite. Iris says that of course she will be able to. Dawn asks her what she will do when she becomes a Dragon Master, as Iris says that she will continue to make progress.

They reach the control room where Dragonite is at, as they notice that Dragonite has an injured wing. They jump down into the room, as Dragonite wakes up and roars. Everyone outside hears the noise and wonders what it is, as they realize that it is Dragonite. Ash tries to calm down Dragonite by saying that they won't hurt it, as Dragonite has an angry look on its face. Iris says that the injury on Dragonite's wing was not caused by the Magnemite, and that there is a reason why it came to the power plant. Dragonite uses Flamethrower, while Piplup uses BubbleBeam and Oshawott uses Hydro Pump to block the attack. Dragonite uses ThunderPunch, while Piplup and Oshawott dodge the attack. Dragonite uses Flamethrower, while everyone dodges the attack and it creates a large hole in the wall.

Dragonite roars, as Meloetta comes through the vent and sings its Relic Song. Dragonite hears the song and calms down. Ash and his friends decide to get the Poké Ball from Officer Jenny to capture Dragonite, as they head toward the exit. Dragonite's injury causes it more pain and it uses Flamethrower to create a hole through the ceiling, and cause obstacles to appear in front of the hole in the wall. Ash and Dawn tell Officer Jenny the situation, as she decides to bring in trainers from Undella Town to deal with Dragonite instead of having it treated first. Piplup uses BubbleBeam, while Oshawott uses Razor Shell on the obstacles in front of the door but nothing happens. Piplup and Oshawott are very discouraged, as Oshawott throws his Scalchop and then puts it back on his chest.

Ash shows up behind the wall, as he informs Iris that powerful trainers will be coming and that Officer Jenny plans to get rid of Dragonite through force. Iris touches Dragonite and a golden aura forms, as she sees what happened to Dragonite and why it is in the power plant. She realizes that Dragonite was just protecting Pidove from the Hydreigon and got injured while doing so. She informs Ash and asks him to find evidence of it. The trainers are headed toward the power plant with Jenny. Ash informs Cilan and Dawn of the situation, as they search the forest for evidence. Dawn wonders if everyone will forgive Dragonite, since it still destroyed the power plant. Ash says that Dragonite didn't mean to destroy the power plant. They see the dent in the wall where Dragonite hit and landed in the water, as they see a camera attached to a tree.

The trainers arrive at the power plant, as Officer Jenny brings out her Ferrothorn. The trainers bring out their Darmanitan, Gurdurr, Garbodor, and Magmortar, as they head toward the control room. Iris says to Dragonite that she will protect it until the others return with the evidence. The trainers' Pokémon try to break through the obstacles in front of the door, as Gurdurr breaks through the door with its steel beam, and Darmanitan uses Superpower to lift the obstacles and they enter the control room. Officer Jenny orders Dragonite to leave the power plant, as Dragonite gets up. Iris tells Officer Jenny that Dragonite didn't come to the power plant to destroy anything, and that it happened by accident.

Dragonite uses Flamethrower, while Ferrothorn uses Flash Cannon, Darmanitan uses Flamethrower, Garbodor uses Gunk Shot, Gurdurr uses Stone Edge, and Magmortar uses Hyper Beam to hit Dragonite's mouth. Iris tells Dragonite not to move since it's hurt, as Officer Jenny tells her to get out of the way and Dragonite cannot go back into the wild. Iris steps in front of Dragonite to protect it, and says for them to attack her as well. She says that they can blame it for destroying the power plant, it didn't mean to destroy it, Dragonite isn't bad, and Dragon Types are not bad. Ash and his friends return to the power plant, as they show Officer Jenny the video of what happened.

Dragonite flies away but keeps looking back at Iris, as Cilan says that Dragonite may want to stay with Iris. Iris asks Dragonite if it wants to stay with her, as Dragonite roars and Iris understands. Iris throws a Poké Ball to successfully capture Dragonite. Iris and Axew celebrate that they caught a Dragonite. Dawn yells that she understands, as she says that it should be how Dragon Masters speak to Dragon Type Pokémon. Meanwhile, Team Rocket has located the ruins, and is sending the data about the ruins to headquarters. Their submarine continues to move through the ocean. 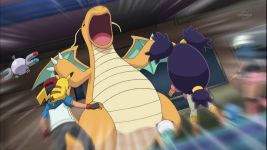 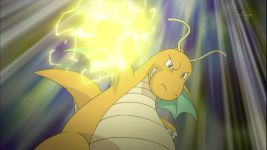