Sunday: Pokťmon the Movie XY - CoroCoro + Pokťmon of the Week

This update will be amended throughout the day so be sure to check back. If you have any ideas for the site, be sure to send them in
With the generation continuing and Nationals coming up globally, and the Chatroom has been rife with discussion while the WiFi Chatroom has been a place for battles, trades and Friend Safari hunting, so be sure to visit them. Our Forums have also had these discussion and are a bustling trade and competitive section for the games. Be sure to like our FaceBook Page.
Last Update: 13:00 BST
Edit @ 13:00: Pokťmon of the Week

The first images from CoroCoro have leaked and have revealed the first imagery from the movie trailer for the third Pokťmon XY movie which is due for release next year. This imagery comes from a trailer that airs after the newest movie, Hoopa & The Clash of Ages which is set to open in Japan on Saturday and showcases a silhouette of a mysterious Pokťmon. Details of this movie remain unclear, but we'll bring more as and when it comes. 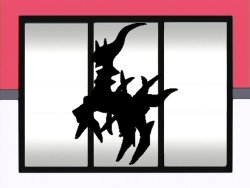 Today marks the eighty-ninth entry into the Generation VI competitive field with a Sinnoh Pokťmon. These entries are created by the visitors for the visitors and then compiled by our writers Miror, Archangel, jesusfreak94, Ragnarok, Psynergy, KillerDraco & UR2L8. To get involved, Click here for the discussion forum
Today, we are covering a Pokťmon introduced in the fourth generation. According to the legends of Sinnoh, this Pokťmon emerged from an egg and shaped all there is in this world. It is told in mythology that this Pokťmon was born before the universe even existed. It is described in mythology as the Pokťmon that shaped the universe with its 1,000 arms. So here it is, the eighty-ninth entry, Arceus.