This update may be amended throughout the day so be sure to check back. If you have any ideas for the site, be sure to send them in
With the generation continuing and Nationals coming up globally, and the Chatroom has been rife with discussion while the WiFi Chatroom has been a place for battles, trades and Friend Safari hunting, so be sure to visit them. Our Forums have also had these discussion and are a bustling trade and competitive section for the games. Be sure to like our FaceBook Page.
Last Update: 09:23 GMT
Edit @ 03:13: Pokkén Tournament | Edit @ 05:20: Movie Summary | Edit @ 09:23: 3DS Theme 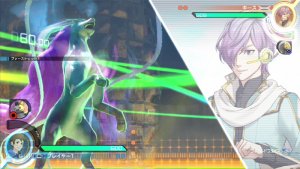 Some new information has been released about the upcoming title, Pokkén Tournament. First, three new sets of Support Pokémon have been revealed. These are Cubone & Diglett, Magneton & Quagsire and Espeon & Umbreon. In addition to this, several new images have been added to our pre-release screenshot section
Edit @ 03:16: The Ferrum League is a feature exclusive to the Wii U version. Beating stages adds more support Pokemon and battle areas. There are four ranks to this league: Green League, Blue League, Red League & Chrome League. It takes place in the Ferrum region. In this region, Resonance Stones link people and their Pokémon. In this game, players can customise their player character's gender, skin colour, hair and so forth.
There are various trainers you will encounter. Nia helps players navigate the world, and she chose Weavile. There are also trainers who exist only in the Wii U version who are tough to beat. Travis with his Garchomp, Keith with his Suicune and Erin with her Braixen
Edit @ 03:25: New modes have been revealed. Practice Mode is where you get to test your skills with no time limit or health. Free Training allows you to train freely. Combo Dojo will teach you various combos for the Pokémon. There's also the My Town mode where you can alter your character's appearance and clothing by spending the in-game currency, PokéGold
For the Support Pokémon, Cubone uses Bonemerang which is a quick long range attack that hits multiple times and brings opponents to you. Diglett uses Dig which makes it easy to land combos when the opponent has been hit. Magneton uses Tri Attack which aims upward. It lowers opponents' Speed & Attack and is good against jumping opponents. Quagsire uses Mud Bomb. It is effective on players on the ground and damages even if guarded against. Espeon uses Morning Sun which removes status conditions as well as healing Hit Points. The less time on the clock, the more it raises. Finally, Umbreon uses Snarl which sucks up the opponent's Resonance Gauge and prevents them being able to land critical hits
Edit @ 08:33: It has also been stated that there are currently no plans to release additional Pokémon or stages through downloadable content. 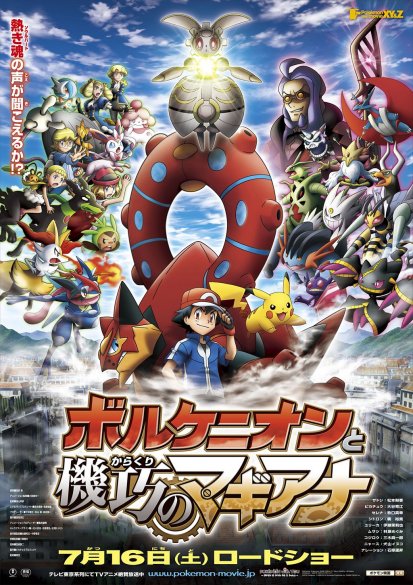 Following the reveal of the Pokémon Magiana on Wednesday in CoroCoro, more details have been revealed for the upcoming movie, Volcanion & The Ingenious Magearna. With this information, the English name of the Pokémon has been confirmed to be Magearna. No further information has been revealed but will be revealed at a later point
Edit @ 05:20: A new summary for the movie has been released
As Ash and his friends journeyed onward, a huge Pokémon suddenly fell from the sky in front of them! Appearing from the cloud of dust whirled up from the impact of the fall was the mythical Pokémon Volcanion! It turns out that Volcanion, who lives in the secluded "Navel Plateau" together with Pokémon that have been injured by humans actually has an intense hate for all humans.

Volcanion completely ignores Ash and his friends, and attempts to hurry away, but for some reason Ash ends up getting pulled along with it. Volcanion makes a run for it, and Ash gets pulled along. Incredibly, without either of them noticing, the two ended up linked together by a strange chain! Even though they want to get loose from this chain, it proves impossible. With no other choice, Volcanion started running off towards "Azoth Kingdom" while pulling Ash along with it, constantly fighting with him on the way.

Meanwhile, Cabinet Minister Jarvis from Azoth Kingdom, a city of super-machinery where gigantic cogwheels are constantly rotating, has obtained the ultimate invention he has been searching for for so many years. It was the artificial Pokémon Magearna, which was born in the kingdom 500 years ago but since went missing, as well as the unknown power called the "Soul Heart" said to reside inside Magearna.

As Jarvis plots to use this power to rule the kingdom, Volcanion was attempting to retrieve Magearna, who got abducted from the Navel Plateau! "Ain't no way I'll ever forgive the humans!"

Will Volcanion and Ash manage to work together and save Magearna while linked together? And what is the true power the "Soul Heart" hides? It's time for the hottest battle in Pokémon history to begin! 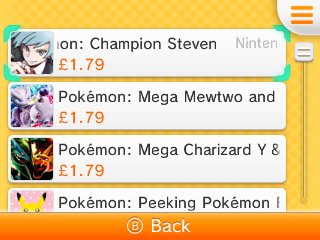 A new theme has been confirmed to come to the Nintendo 3DS Theme Shop this week in Europe. The image of this theme is not currently known but we'll provide them as soon as possible. This theme is based on the Hoenn Champion Steven and is described as "A theme featuring Champion Steven and his team of Pokémon. Scroll the Touch Screen to explore a unique comic-style illustration." We don't currently know when these will come to Japan and the US but it'll be likely this week. Keep checking back and we'll provide images as soon as they come