This update may be updated throughout the day. If you have any ideas for the site, be sure to send them in
With the generation continuing and Nationals coming up globally, and the Chatroom has been rife with discussion while the WiFi Chatroom has been a place for battles, trades and Friend Safari hunting, so be sure to visit them. Our Forums have also had these discussion and are a bustling trade and competitive section for the games. Be sure to like our FaceBook Page.
Last Update: 11:18 BST 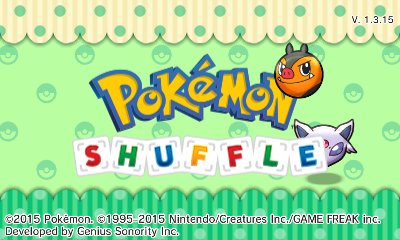 The recent issue of the Pokémon Fan magazine in Japan has outlined a few upcoming events and updates to Pokémon Shuffle. First, a new set of 50 main stages is to be released on July 26th which appears to feature Mega Tyranitar. Also, from July 26th a special Checkin Promotion will run which gives Skill Swappers and Raise Max Levels. Next, a Hoopa Unbound stage is also set to come. In addition to this, the Zygarde 10% Forme stage will have a rerun from July 26th through August 9th, the Ash-Greninja stage will have a rerun from August 2nd through August 16th and the Mew stage will begin a rerun on August 9th. We'll provide full details on each other these