This update may be amended throughout the day so be sure to check back. If you have any ideas for the site, be sure to send them in
With the generation continuing and Nationals coming up globally, and the Chatroom has been rife with discussion while the WiFi Chatroom has been a place for battles, trades and Friend Safari hunting, so be sure to visit them. Our Forums have also had these discussion and are a bustling trade and competitive section for the games. Be sure to like our FaceBook Page.
Last Update: 19:00 BST
Edit @ 19:00: PokéPark Wii

The official Japanese Pokémon Twitter has confirmed that brand new information for Pokémon Sun & Moon is to be released on June 2nd 2016. It's not currently known what information will be revealed at this time but the second we get any more news it'll be posted right here so be sure to keep checking back. For all currently known information, check our Sun & Moon section 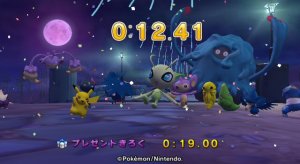 For those of you in North America, the Wii title, PokéPark Wii: Pikachu's Adventure is to hit the Wii U eShop tomorrow for $19.99. This game came out back in 2009 for the Wii and is an Action/Adventure game where you play as Pikachu as he explores the PokéPark, playing mini-games along the way. We covered this game in full back in 2009 so click the image to go to our section.