This update may be amended throughout the day so be sure to check back. If you have any ideas for the site, be sure to send them in
With the new generation out, the Chatroom & Discord Chat has been rife with discussion while the WiFi Chatroom has been a place for battles & trades, so be sure to visit them. Our Forums have also had these discussion and are a bustling trade and competitive section for the games. Be sure to like our FaceBook Page.
Last Update: 12:05 GMT
Edit @ 12:05: Pokťmon Duel Event 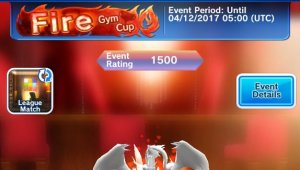 The smartphone game, Pokťmon Duel, has had a new update. This update brings the Fire Gym Cup. Trophies will also be given at the end of the event with you being able to display on your ranking screen. This event has all Fire-type Movement 1 & 2 figures get an increase of 1 for movement and Ground-types getting an Attack increase of 20 for each attack. It lasts until April 12th at 04:59 UTC with Booster Redemptions until April 20th. 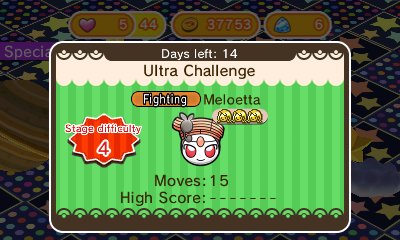 A few brand new challenges have begun on Pokťmon Shuffle and Pokťmon Shuffle Mobile.
First, a special stage for Meloetta Pirouette Forme has begun. It lasts until April 18th 2017
A repeat of a Pokťmon Safari has also begun until April 18th. It contains the Pokťmon Pineco, Forretress, Ledyba, Ledian, Houndour, Houndoom, Noibat, Hoothoot and Noctowl. After capture, they may drop Exp. Booster S, M or L.
Next, stages for Zekrom and White Kyurem have all begun repeat runs until April 18th 2017. They will give personal Skill Boosters if previously captured.
Also, a one chance a day repeat run of Thundurus Incarnate Forme has begun and runs until April 11th 2017
Next, a special stage for Noivern has also begun a repeat run until April 18th 2017. It may drop Noivern Skill Boosters if previously captured
Finally, a special stage for Yveltal has begun and will run until April 11th 2017. It may drop Yveltal Skill Boosters or Raise Max Levels if previously captured
All of these require the version 1.4.5 to download. Our Pokťmon listings have been updated with these Pokťmon 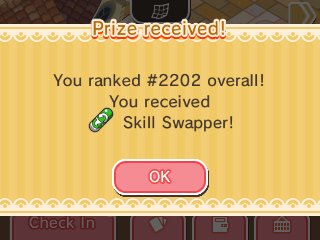 If you were one of the lucky players worldwide who ranked in the Meloetta competitive stage over the past week, then the prizes are now available to be received. The Attack Power, Mega Speedup and Raise Max Level for the higher ranked players will also be obtained. If you didn't qualify, then you can redeem an Attack Power. To get these items, simply Check In between now and April 11th 2017 at 06:00 UTC and you will receive the item.