This update will be amended throughout the day so be sure to check back. If you have any ideas for the site, be sure to send them in
With the new generation out, the Chatroom & Discord Chat has been rife with discussion while the WiFi Chatroom has been a place for battles & trades, so be sure to visit them. Our Forums have also had these discussion and are a bustling trade and competitive section for the games. Be sure to like our FaceBook Page.
Last Update: 17:28 GMT
Edit @ 07:03: Pokémon Shuffle | Edit @ 09:17: Pokémon Duel | Edit @ 14:00: Pokémon Direct | Edit @ 15:02: Pokémon Direct News

Today is the special Pokémon Direct where the next big news for the Pokémon franchise will be announced. This presentation begins at 15:00 BST / 16:00 CEST / 23:00 JST / 10:00 EDT / 07:00 PDT and you'll be able to watch it right here in the embedded video below. This update will be updated with all the announcements as they happen so if you do not wish to watch, be sure to keep checking back for all the news
Edit @ 15:01: Pokkén Tournament DX has been revealed for Nintendo Switch! It contains local two player multiplayer with the JoyCons as well as play with two different JoyCons. It includes the Arcade characters as well as the Pokémon Decidueye
15:04: Pokémon Ultra Sun & Ultra Moon are available on November 17th 2017 on Nintendo 3DS
15:07: Pokémon Gold & Silver to hit the 3DS Virtual Console on September 22nd and have Pokémon Bank support
15:28: We have opened up sections on Ultra Sun & Ultra Moon and Pokkén Tournament DX. We'll be adding to these over the next few hours so keep checking back
Below is a list of all Pokkén Tournament new features from the press release
Play Pokkén anytime, anywhere on Nintendo Switch – Play Pokkén Tournament DX in TV mode, handheld mode, or share a Joy-Con controller with another Trainer to battle one-on-one in tabletop mode anywhere!
A brand-new fighter — Decidueye enters the battle, alongside all previous Pokémon from the Wii U and arcade versions.
New Support Pokémon – Litten and Popplio make their debut to lend their support in battle.
Team Battle mode – Pick three Pokémon and battle it out to be the first to defeat all your opponent’s Pokémon to win in the new Team Battle mode.
Group Match mode – Find similar skilled players in battle rooms for intense and fun battles online.
Daily Challenges – Complete a variety of different daily challenges.
Watch battle replays – Hone your skills by watching other players’ replays and share your best matches online with the new replay feature.
Jump straight into battle - All characters and Support Pokémon will be available right from the start of the game.
Edit @ 15:40: It is currently noted that The Pokémon Company International's press site is listing Ultra Sun & Ultra Moon as being on the Nintendo Switch with a "To Be Announced" date. It's currently unclear if this means they will come out on Nintendo Switch in the end but we'll provide all details as and when they come. They have since deleted this note.
Edit @ 16:09: Fixed an error in the Ultra Sun & Ultra Moon section and added a Forms Page
Edit @ 16:19: Updated with a Pre-Release Screenshot page for Pokkén Tournament DX
Edit @ 16:30: The Pokémon Company stated to Kotaku that the listing on the press site was a clerical error and not indicative of any release on Nintendo Switch, stating it will be exclusive to the 3DS
Edit @ 16:55: Some Pre-Release Screenshots for Pokémon Ultra Sun & Ultra Moon
Edit @ 17:18: It has also been confirmed that Pokkén Tournament will be playable through Split-Screen in Local Play for 2 players. The split is vertical but with each side having a 16:9 window in the vertical half. Picture is below
Edit @ 17:28: It is also confirmed that the Pokkén Tournament controller released for the Wii U last year will work on Pokkén Tournament DX when the Switch is docked.

For those of you who participated in the recent 2017 International Challenge April Competition, the entry gift is now available to all qualifying players through this link after logging into the Global Link. This gift is an Abomasite, Tyranitarite and Manectite, which cannot be obtained through any other means at this time, and needs to be redeemed by July 30th 2017 at 23:59 UTC.. However, separate distributions for these Mega Stones through shared code will begin in later this year for those who didn't participate in this online competition. 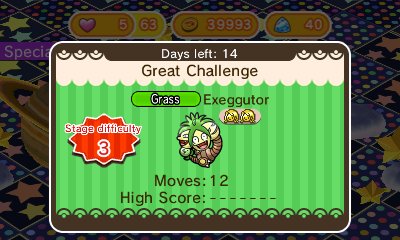