This update may be amended throughout the day so be sure to check back. If you have any ideas for the site, be sure to send them in
With the new generation out, the Chatroom has been rife with discussion while the WiFi Chatroom has been a place for battles, trades and Friend Safari hunting, so be sure to visit them. Our Forums have also had these discussion and are a bustling trade and competitive section for the games. Be sure to like our FaceBook Page.
Last Update: 04:57 GMT
Edit @ 04:57: Pikachu Event 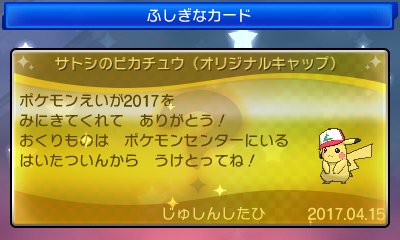 Details of the next Battle Competition have been announced. This is the special Japan Championships 2017 Battle Competition and runs standard VGC 2017 rules. This competition is used in order for players from Japan to qualify for this year's Pokťmon World Championships in Anaheim and runs differently to past competitions.
Registration for Juniors & Seniors runs from March 30th 2017 to April 28th 2017 while registration for Masters runs from March 30th 2017 to April 15th 2017. Battles for the Juniors runs from April 28th through May 1st. The Masters however have access to 5 different schedules. These are
April 15th to April 17th, April 21st to April 23rd, April 26th to April 28th, April 30th to May 2nd and May 6th to May 8th, all starting and ending at 09:00 JST on the respective days. The rating from each of the participations in the 5 bands are then added up and the top 50 will be offered entry to a competition held in real life on June 18th 2017