This update may be amended throughout the day so be sure to check back. If you have any ideas for the site, be sure to send them in
With the new generation out, the Chatroom & Discord Chat has been rife with discussion while the WiFi Chatroom has been a place for battles & trades, so be sure to visit them. Our Forums have also had these discussion and are a bustling trade and competitive section for the games. Be sure to like our FaceBook Page.
Last Update: 11:40 GMT
Edit @ 07:58: Magikarp Jump | Edit @ 10:02: Pokťmon Duel

A new mobile game has been announced. This game is called PokťLand and is the continuation of the Pokťmon Rumble series. Not much is currently known about this game but it is entering Alpha Testing in Japan on Android devices today until June 9th 2017. During the Alpha Test, you can find 134 different Pokťmon, complete 52 stages and climb Champion Tower to 15 floors. Data from the test will be deleted when the game comes out. Using the Nintendo Account, you can move stored data between devices and your Mii will appear. The game will unlock new islands when you spend diamonds. It requires an online connection. The game has a special detector to find Pokťmon which can only be used once every 30 minutes and you can power up your Pokťmon toys by using P and Gears obtained in the game. The release date of the full game has yet to be announced but it is confirmed that it'll be available on both iOS and Android devices
Edit @ 07:56: Added a section for this game including pre-release screenshots
11:40: The Pokťmon Company has confirmed that they have reached the limit for Alpha Testers. They have noted that more testing positions should open up during the testing time 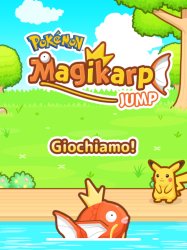 A new update has gone live for Magikarp Jump. This update lists various bug fixes but it has been discovered that the bug fix is the rewards from completing the Extra League 3. Before now, you could repeat Extra League 3 ad nauseum and get 25 Diamonds and 1 Support Candy each time you completed the league. However, as of Version 1.0.3, you will only get the reward the first time you complete the league. We'll bring more about other updates as and when they come 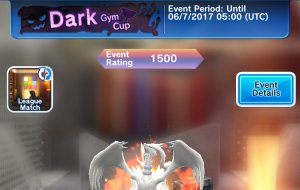 The smartphone game, Pokťmon Duel, has had a new update. This update brings the Dark Gym Cup. Trophies will also be given at the end of the event with you being able to display on your ranking screen. This event has all Dark-type Movement 1 & 2 figures get an increase of 1 for movement and Fighting-types getting an Attack increase of 20 for each attack. It also gives the Darkrai Figure as a prize. It lasts until May 6th at 04:59 UTC with Booster Redemptions until June.