This update may be amended throughout the day so be sure to check back. If you have any ideas for the site, be sure to send them in
Since the release of Pokťmon Ultra Sun & Ultra Moon, the Chatroom & Discord Chat has been rife with discussion while the WiFi Chatroom has been a place for battles & trades, so be sure to visit them. Our Forums have also had these discussion and are a bustling trade and competitive section for the games. Be sure to like our FaceBook Page.
Last Update: 14:00 BST
Edit @ 10:12: Pokťmon Duel Update | Edit @ 11:14: Episode Pictures | Edit @ 13:00: Pokťmon GO | Edit @ 14:00: 3DS Themes 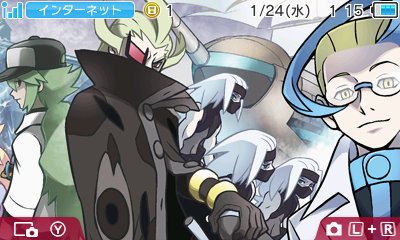 Following their release in Japan last week, two new Nintendo 3DS themes will be available in North America at 09:00 ET/06:00 PT.
The first is Pokťmon: Team Plasma (BW) which features artwork of N, Ghetsis, the sages & Genesect with the Battle! Team Plasma music from Black & White
Next is Pokťmon: Team Plasma (B2W2) which features artwork of N, Ghestis, Colress and other Team Plasma members. It has the Battle Team Plasma music from Black 2 & White 2. Both can be purchased for 200¥. C
There is currently no sign of European release
Edit: At this time, despite Nintendo America saying they'd be released, they have not been added yet. We'll post when they get added

A special trailer has been released to promote Pokťmon GO. This trailer is narrated by Stephen Fry and is scored by George Fenton who scored award winning documentaries Planet Earth, Frozen Planet & Blue Planet.

The smartphone game, Pokťmon Duel, has had a new update. This patch takes it to version 5.0.8 and requires 247MB of space on your mobile device to download. It is required to update in order to play the game
This patch contains various brand new figures. The UX Figures are Buzzwole, Pheromosa & Mega Gallade,
The EX Figures are Gallade & Bewear
The R Figures are Poliwrath & Hypno
The UC Figures are Makuhita, & Stufful
Several new Plates have also been added to the store
In addition to this, the balance patches announced yesterday have gone into effect 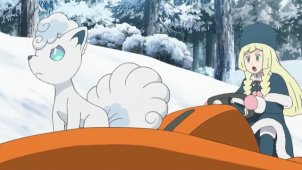 As usual, we have done pictures from the episode that aired in Japan today. This episode features Ash & Co. go to Mount Lanakila and participate in the PokťSled Tournament. The AnimťDex has been updated with the contents of this episode. Click the picture to go to the gallery but be warned however as they contain spoilers.

A Japanese TV guide has revealed a new episode title for an upcoming episode of the anime. This episode is due to air on February 22nd 2018 and features Ash entering a Battle Royal to take on the famous trainer, the Masked Royal
Episode 1006: Burn with Passion, Litten! Down with Incineroar!!