This update may be amended throughout the day so be sure to check back. If you have any ideas for the site, be sure to send them in
Since the reveal of Pokťmon Ultra Sun & Ultra Moon, the Chatroom & Discord Chat has been rife with discussion while the WiFi Chatroom has been a place for battles & trades, so be sure to visit them. Our Forums have also had these discussion and are a bustling trade and competitive section for the games. Be sure to like our FaceBook Page.
Last Update: 09:20 GMT
Edit @ 08:00: Pokťmon Duel Patch | Edit @ 09:20: CoroCoro 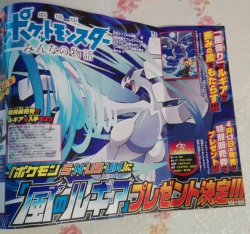 The first images from CoroCoro have leaked and have revealed the latest news. As always, do note that translations are preliminary while we work on them. This reveals that, as expected, Lugia is to be distributed to Pokťmon Sun, Moon, Ultra Sun & Ultra Moon through Serial Code from April 13th to July 12th when you prebook tickets for the upcoming movie, Everyone's Story with codes redeemable until September 30th. This Lugia is Level 100 with its Hidden Ability Multiscale and the moves Aeroblast, Defog, Tailwind, & Hurricane, a move it can't normally learn. The Lugia is nicknamed the Wind Lugia, possibly due to only knowing Flying-type moves and matching the premise of the movie where people come to the Wind Festival in Fura City. We'll bring more as it comes 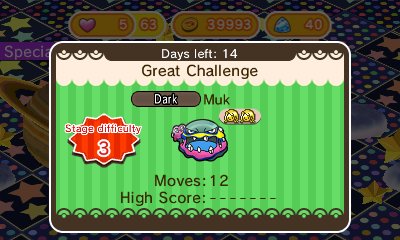 Pokťmon Shuffle has begun Week 5 of its event cycle. This cycle continues the Escalation Battle from last week as well as the following stages that will run for a week
The Ultra Challenge Stage is a stage for Arceus
The Great Challenge Stages are Alolan Muk, Regice, Kyogre, Drifloon & Drifblim
The Daily Pokťmon are Seviper, Wynaut, Torkoal, Zangoose & Luvdisc
There's a One Chance Per Day stage for Jellicent (Female)
There's a Competitive Stage against Mega Steelix

Tomorrow, a new version of Pokťmon Duel is being uploaded following the weekly maintenance. This update is Version 5.0.11 and includes a variety of changes. In it, the following fixes will be addressed
Homeward Lights Ability - Fixes abormalities in activation and game freezes
Black Core Ability - Doesn't properly evolve when triggered
Steel Energy & Metal Sphere Plates - Fixes issue where damage isn't properly calculated