This update may be amended throughout the day so be sure to check back. If you have any ideas for the site, be sure to send them in
Since the release of Pokťmon Ultra Sun & Ultra Moon, the Chatroom & Discord Chat has been rife with discussion while the WiFi Chatroom has been a place for battles & trades, so be sure to visit them. Our Forums have also had these discussion and are a bustling trade and competitive section for the games. Be sure to like our FaceBook Page.
Last Update: 06:35 BST
Edit @ 06:03: Pokťmon Shuffle | Edit @ 06:35: Pokťmon Duel 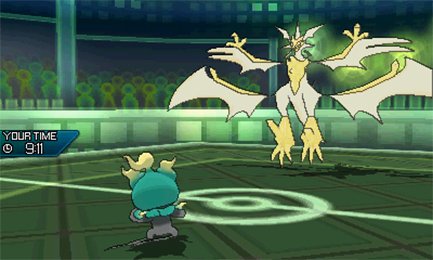 The Special Battle rules for Season 8 have been revealed. Season 8 will run from January 23rd to March 12th 2018 and runs on Sun & Moon and Pokťmon Ultra Sun & Ultra Moon, with rankings separate to eachother. This ruleset allows for use of all Pokťmon within the new Alola Pokťdex
Battle type: Single Battle
Pokťmon Restrictions: National Pokťdex. No more than 1 of Mewtwo, Mew, Lugia, Ho-Oh, Celebi, Kyogre, Groudon, Rayquaza, Jirachi, Deoxys, Dialga, Palkia, Giratina, Phione, Manaphy, Darkrai, Shaymin, Arceus, Victini, Reshiram, Zekrom, Kyurem, Keldeo, Meloetta, Genesect, Xerneas, Yveltal, Zygarde, Diancie, Hoopa, Volcanion, Cosmog, Cosmoem, Solgaleo, Lunala, Necrozma, Magearna, and Marshadow.
The other standard rules apply, including all set to Level 50 if above that, and you choose 3 Pokťmon out of your 6, and you cannot have two Pokťmon holding the same hold item. Battles have a 10 minute duration, with turns having a 60 second timer. 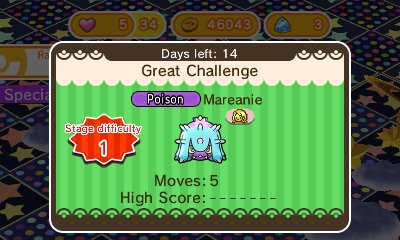 A few brand new challenges have begun on Pokťmon Shuffle and Pokťmon Shuffle Mobile.
First is a new stage featuring Mareanie. This stage will run until January 30th 2018
Next is a stage featuring Electrode, a Pokťmon previously exclusive to Expert stages. It runs until January 23rd 2018
Next is a Mega Salamence competitive stage. This is a competitive stage that runs until January 23rd 2018. Finally, the Xurkitree, Palossand, Lycanroc & Thundurus Therian Forme stages have begun a repeat run
All of these require the version 1.5.1 to download. Our Pokťmon listings have been updated with these Pokťmon

Tomorrow, a new version of Pokťmon Duel is being uploaded following the weekly maintenance. This update is Version 5.0.6 and includes a variety of changes. In it, some figures are set to be updated
Drapion
Movement increased from 1 to 2
Arbok
Added new ability: Shed Skin
Increased power of Poison Fang from 40 to 50
Seviper
Added new ability: Rapid Approach
Increased wheel size of Toxic Fluid & Poison Tail
Decreated wheel size of Wrap