This update may be amended throughout the day so be sure to check back. If you have any ideas for the site, be sure to send them in
Last Update: 12:43 GMT
Edit @ 12:43: Episode Titles

A Japanese TV Guide has revealed new episode titles for upcoming episodes of the anime. These episodes are due to air on January 20th, January 27th, February 3rd and February 10th respectively and continue the adventures in Poni Island. The first episode features Gladion appear in Poni Island and Ash challenging him to a match, Lycanroc VS Lycanroc. The second episode has Sophocles intend to get his Charjabug to evolve into Vikavolt in Vast Poni Canyon while Lana trains with Popplio to learn the moves known by Aia's Primarina. The third episode features Ash accidentally enraging Tapu Fini by battling Kiawe in the Ruins of Hope.
Episode 1048: Lycanroc Showdown! Ash VS Gladion!!
Episode 1049: We Have the Sea and We Have Valleys! Pokémon Evolution Training!!
Episode 1050: Run, Kiawe! Surpass Yourself!!
Episode 1051: In Tapu Fini's Mist 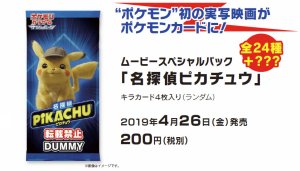 Various Japanese retailers have revealed details about upcoming Trading Card Game sets in Japan. First, on April 26th 2019, a special subset of at least 24 cards will be released based on the upcoming Detective Pikachu live-action movie. Each booster pack costs 200¥ and provides 4 Holo Cards. Further retailer listings indicate that this set will be released in the west through special promotional boxes
Following that, on May 31st 2019, a new set called Miracle Twin focusing on Mew and Mewtwo is to be released. This set consists of over 94 cards. This set will likely be released in the west around August 2019.