Floatzel, The Sea Weasel Pokťmon. It is a common sight around fishing ports. It is known to rescue people and carry off prey..With its flotation sac inflated, it can carry people on its back. It deflates the sac before it dives. Its flotation sac developed as a result of pursuing aquatic prey. It can double as a rubber raft. It floats using its well-developed flotation sac. It assists in the rescues of drowning people.

Swift Swim: Standard ability. It doubles Floatzel's Speed in the rain, letting it outspeed anything. However, in some circles with a ban on the Drizzle/Swift Swim combination, it can be less useful.
Water Veil: A bit of a gimmicky ability but can be very useful in some cases. It prevents Floatzel from being burned

Your standard Choice set here. Each move can provide decent coverage with Waterfall getting the added boost of STAB. Ice Punch will take care of Grass and Dragon-types that may try to block Floatzel, Crunch can take care of many Psychic and Ghost-types. Finally, Aqua Jet can be used to get a priority hit in, or alternatively you can use Switcheroo to switch the Choice Band over to various Pokťmon in order to screw up the opponent's strategy.

A standard Bulk Up set here. Due to Floatzel's Speed, you should be able to get set it up pretty easily. With Bulk Up, Floatzel's Attack gets to a respectable level and helps shore up its dire Defense. The other moves work exactly like the other sets, providing decent coverage to take out most opponents. Some would consider putting Baton Pass on this set, to pass the Attack and Defense boosts to other Pokťmon, but that's not completely necessary for this set.

This Floatzel set is a bit of a gimmick but can cripple the opponent easily. Using the Water Veil ability, the Flame Orb that it carries will not activate, thus not showing your hand. If you use Switcheroo, it will give the Flame Orb to the opponent, and will burn it at the end of the turn, halving their Attack and putting in decent damage. The other moves work as standard, taking Floatzel's Attack into consideration and providing some decent coverage.

Aqua Tail, Focus Punch/Substitute, Ice Beam, Hidden Power, Rain Dance, Scald, Toxic
Aqua Tail can provide decent damage, but has a slightly lower accuracy to Waterfall so isn't always the optimal choice
Focus Punch & Substitute can be used together to do decent damage as the standard SubPunch combination
Ice Beam can give a decent Ice-type move if you choose to go with a Mixed and/or Special set
Hidden Power can be useful for type coverage, especially if it is Grass-type
Scald gives a nice Special Water-type move, with the added bonus of possibly burning the opponent
Rain Dance can be used to set up other Pokťmon, due to Floatzel's Speed, and can be used on Floatzel itself to help it double its speed
Toxic is an obvious choice based on Floatzel's Speed, allowing it to quickly inflict this status on the enemy

Floatzel is really not that well suited for Double & Triple battles, it's at home in Singles due to the majority of the attacks that use Physical being single target

Anything that can set up Rain Dance can be incredibly handy for Floatzel. Politoed with Drizzle is the optimal choice when you're not dealing with the Smogon rules or Pokťmon like Volbeat who have Prankster so can set it up before any other Pokťmon moves. Alternatively, Tailwind users can be used in the same way

While Floatzel can hit fast, it cannot take a serious hit, having low defences. Zebstrika is a great counter due to Floatzel lacking Ground-type moves and it being able to easily outspeed Floatzel in standard weather. Trick Room can completely cripple any Floatzel and have it taken out quickly. If you have any Bulky Water or Grass Pokťmon, then they are also good to be able to stall and take out Floatzel. 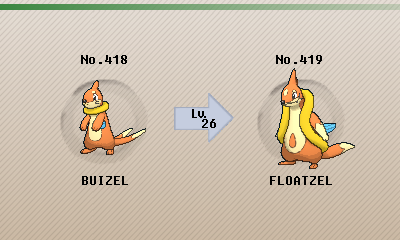