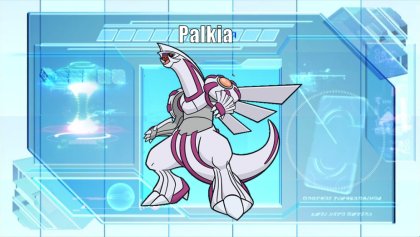 Palkia, The Spatial Pokémon. It has the ability to distort space. It is described as a deity in Sinnoh-region mythology. It is said to live in a gap in the spatial dimension parallel to ours. Palkia appears in mythology.

The master of space still struggles to carve out a niche for itself in the current generation. Like all legendaries, Palkia has a host of things going for it. Excellent Water Dragon typing that gives it few weaknesses and makes it one of the best answers to Kyogre and an amazing STAB combination that few Pokémon resist. An insane Base 150 Special Attack and wide movepool complimented by above average bulk so it can survive to deal out those massive attacks. And the removal of Primal Groudon who otherwise complete ruined Palkia’s Water STAB and niche has enabled Palkia to flourish.

However, competition for the Dragon slot is particularly fierce among legends with old rivals like Rayquaza and Zygarde Complete and new rivals like Eternatus and Dracovish can make it hard to justify Palkia especially given its less than perfect accuracy STAB Spacial Rend and Hydro Pump. While Water Dragon has few weaknesses, it also has few Resistances, enabling foes to wear down Palkia quickly and limiting switch-in opportunities. Palkia has its flaws, but skilled play can prove it a terrifying threat.
Positives
With its colossal base 150 Special Attack, and near perfect coverage with its STABs, almost nothing can switch into Palkia safely.
Quadruple Resistance to Water makes Palkia an excellent answer to Kyogre.
Negatives
Few resistances and lack of recovery leave Palkia liable to be worn down quickly. Palkia’s STABs can be unreliable, hurting its constancy, especially in comparison to other offensive and defensive Dragon types.

THE MASTER OF SPACE

Palkia makes the most of its natural bulk to leverage its incredible attacking prowess to force its way through walls. Have Palkia switch in on an attack it can certainly take like Kyogre’s Water Spout or Choice locked Dracovish’s Fishious Rend and force your opponent into a tough situation of what Pokémon of theirs is going to eat an attack from Palkia. Spatial Rend is an amazing STAB, due to its wide neutral coverage and high Crit Chance. Hydro Pump is less reiliable than Spacial Rend, but has even more power and can be pushed to even higher heights by Kyogre’s Rain. Earth Power answers problematic Steel types like Necrozma Dusk Mane, Zacian Crowned and Dialga. Thunder rounds out the set, punishing Kyogre and Yveltal while having a decent Paralysis chance.

DYNAMAX:
Palkia loves Dynamaxing for the bulk increase and fixing the accuracy of its moves, but ultimately isn’t the best Dynamax target to be using. It can pseudo scale defensively thanks to Max Wyrmwind and Max Quake, but the attack drops from Max Wyrmwind are lost upon switching out and ultimately proves to be less of an instant win condition as opposed to other Dynamax sweepers. The good synergy with Palkia setting up its own Rain for Hydro Pump and Thunder pushes Palkia into worthwhile consideration for Dynamaxing despite these flaws.

EVs and Items:
Standard Sweeper array of Max Speed and Special Attack. Palkia’s Base 100 Speed is above average for most legendaries who otherwise sit around the base 90 to 95 range, enabling Palkia to get the jump on more targets. Lustrous Orb buffs up Palkia’s STABs while Life Orb is a larger more general attack boost but at the cost of increased fragility.

Partners:
Kyogre makes a great partner for Palkia, boosting its Hydro Pumps to insane heights while fixing Thunder’s accuracy and can answer opposing Dragon types with Ice Beam. Steel types make great Palkia partners, able to pivot into Dragon and Fairy moves and often compliment Palkia’s Special Offense with their own Physical offence. Magnezone stands out for trapping Ferrothorn and luring in Blissey with Body Press while providing Speed Control with Thunder Wave

Blissey makes by far the most reliable Palkia counter. Bar the rare Physical set/Focus Punch, Blissey can wall Palkia without issue. Ferrothorn fairs similarly well, but must be wary of sets running Fire Blast which will melt Ferrothron. Xerneas can use Palkia as Geomancy setup or go straight for the OHKO with Moonblast, but must get a free switch in, as Hydro Pump will 2HKO and Palkia naturally outspeeds Xerneas.
Otherwise, in general faster Dragon and Fairy types can easily check Palkia thanks to their higher Speed and STABs, though the dragon types must be careful lest they eat a Spacial Rend of their own. Palkia’s lack of resists and exposure to all Entry Hazards and status enables Palkia to be worn down quickly. 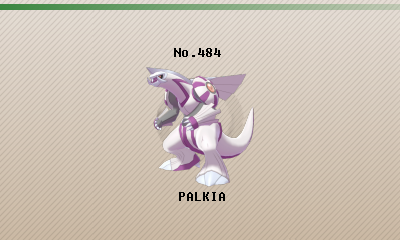