This update may be amended throughout the day so be sure to check back. If you have any ideas for the site, be sure to send them in
Last Update: 14:04 BST
Edit @ 13:58: Pokémon GO Summer Event Schedule 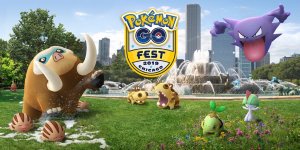 Niantic have confirmed their schedule of Real Life events this summer. For the first time, a Pokémon GO Fest will be outside of the US with Pokémon GO Fest being in Dortmund. Here's a list of all the details
Pokémon GO Fest - Grant Park, Chicago, Illinois - June 13th - June 16th 2019
The GO Fest in Chicago will include new Special Research, GO Snapshot Photo spots and more rewards that players both at the park and globally work towards. Further details will come in the next few months. Attendees can only purchase tickets ($25 per person) for one of the four days and only through a portal in the Pokémon GO app coming later this month. The image indicates that Pachirisu will be the Regional Pokémon at the event
Pokémon GO Fest - Westfalenpark, Dortmund, Germany - July 4th - July 7th 2019
Pokémon GO Fest Asia - 2019 Summer
They have also announced Community Days for May 19, June 8, July 21 & August 3

Registration for the next Battle Competition has begun. This is the Pokémon Japan Championships 2019 competition and is for Japan only. This is a Double Battle competition using standard 2019 VGC rules where players can use 2 Restricted Pokémon (Mewtwo, Lugia, Ho-Oh, Groudon, Kyogre, Rayquaza, Dialga, Palkia, Giratina, Reshiram, Zekrom, Kyurem, Xerneas, Yveltal, Zygarde, Cosmog, Cosmoem, Solgaleo, Lunala & Necrozma) and is based on the Ultra Series where both Z-Crystals and Mega Evolutions are allowed. This competition offers a chance to qualify to the Japan Championships inside Japan. All Pokémon will be raised to Level 50 for the duration of the competition.
Registration runs from April 4th - April 19th. Battles will run from April 19th - April 22nd.
All entrants who play 3 or more matches will get a Shiny Tapu Fini which will be distributed some time in May