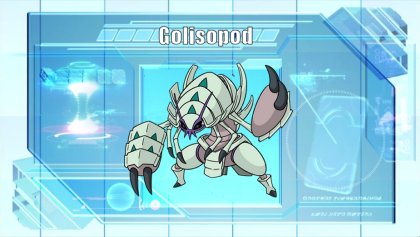 Golisopod, the Hard Scale Pokťmon. It will do anything to win, taking advantage of every opening and finishing opponents off with the small claws on its front legs. They live in sunken ships or in holes in the seabed. When Golisopod and Grapploct battle, the loser becomes the winner's meal.

For better and for worse, Golispod remains defined by its signature ability Emergency Exit. And there are some positives. First Impression is a fantastic priority move that with Golisopodís immense Attack hits most targets hard. Excellent synergy with Spikes, as the self-imposed switching often forces more switching, racking up entry hazard damage. And the ability to switch mid-turn near guarantees Golispodís teammate gets in safely, which is key for many setup sweepers.

However, Emergency Exit is often for the worse. Golisopodís poor speed makes it simple to outspeed and force out, often losing a turn for no discernable benefit. Boosting moves are near out of the question, as the self phazing ruins setup attempts and Golispod will be too damaged to attempt for another. And while Golispodís bulk is good, exposure to every entry hazard and significantly lower Special Defense make reaching that threshold so much easier. And the generational mechanic is just a spit in the face for Golisopod, as its own ability prevents effective use of Dynamax. Golisopod has a lot going for it, great bulk and power, a wide selection of priority to offset its poor speed and a myriad of utility moves that enables some great role compression. However its own ability shackles it, and it takes a deft hand to get the most out of it. .
Positives
Impressive 125 Attack alongside great STABs and coverage ensures Golisopod hits hard.
Titanic 75/140 Physical Bulk ensures Golisopod can take a hit or two, and STAB Leech Life gives it a bit of longevity.
Good movepool with Knock Off and Spikes for utility gives Golispod a great degree of flexibility in a battle-by-battle basis.

Negatives
Base 40 Speed is abysmal, forcing Golisopod to rely on priority until its ability activates
Emergency Exit is mandatory and can cause a lost turn if Golisopod is struck before it can attack.
90 Special Defense and exposure to passive damage make Golisopod easy to wear down
Shows that the Gymleader music change is tied to their last Pokťmon and not the Dynamax/Gigantamaxed one.

This set aims to best balance Golisopodís power and utility. First Impression is incredible STAB priority, easily taking down weakened targets that are out of range from other Priority attacks. Liquidation is a reliable secondary STAB, punishing many Pokťmon that resist or have the Defense to take a First Impression. Knock Off gives Golisopod excellent utility, punishing most Pokťmon that come in as well as the Ghost types that resist First Impression. Spikes rounds out the moveset, taking advantage of the switches Golisopod forces with both its presence and Emergency Exit to rack up damage as well as draw defoggers in for a Knock Off.

Managing Emergency Exitís once per battle forced switch is important for getting the most out of Golisopod. If you are up against an opponent that outspeeds you and can knock you below half HP is worth considering whether or not you switch out or get forced out by Emergency Exit. Non-Confusion non-weather damage knocking Golisopod below half will trigger Emergency Exit so be mindful of that against more passive opponents. Anticipate what your opponent will do and act accordingly.

DYNAMAX:
DYNAMAX: Golisopod is not a good Dynamax candidate, its own ability often cutting the duration short and usually being too slow and weakened post Emergency Exit to make use of Dynamaxís buffs.

EVs and Items:
Max HP and Attack to maximize Golisopodís bulk and power. HP investment can be sacrificed for Speed to outspeed defensive staples. 60 Speed EVs outruns uninvested Hippowdon. 100 Speed gets over uninvested Diancie, Tangrowth, and Chansey. Heavy Duty Boots is recommended due to the constant switching, though if confident (or unconcerned) about opposing Entry Hazards, Choice Band can bring Golisopodís power to the next level.

Partners:
Setup sweepers pair naturally with Golisopod loving the Spikes setup, Item Disruption and Emergency Exit switch to get them on the field safely to setup and go for the sweep. Swords Dance Garchomp and Excadrill stands out thanks to their typing making them an easy pivot into Rock and Electric attacks. Electric types pair naturally with Golisopod, answering opposing Electric and Flying attacks while striking down Water types that Golisopod can struggle to damage. Thundurus Therian stands out as a setup sweeper whose offense compliments Golisopodís, though the Rotom Appliances with their bulk and Will-o-Wisp access, and Tapu Koko answering Dragon types make for fine choices as well.

Other Options:
Aqua Jet -Water STAB priority, which is good pre-Emergency Exit and hits a larger range of types than First Impression Sucker Punch -Another Priority option, though conditional on your opponent attacking. Leech Life -gives Golisopod a badly need durability boost and prevents it from being locked out of a Bug STAB after the first round. Close Combat -hits Ferrothorn harder than anything else.

Despite its many flaws, Golisopod has few direct counters. Faster Pokťmon donít want to get hit by its myriad of priority attacks while defensive Pokťmon are invariably crippled by the item loss of Knock Off. Tapu Lele gets very close, being immune to priority, having enough bulk to tank any one attack and trigger Emergency Exit, but absolutely cannot be weakened and can be 2HKOíd if Emergency Exit was already triggered than healed back off. Burning Golisopod does wonders in defanging its threat, reducing its damage output and potentially triggering Emergency Exit at an inopportune time. Checking Golisopod is relatively simpler. Once the first impression window is over, there are many Pokťmon that can reliably tank an Aqua Jet or Sucker Punch, outspeed normally and force Golisopod into Emergency Exit range or just OHKO it. 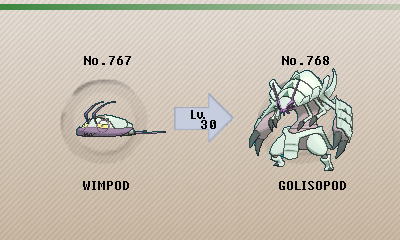