Exploud has always been the essence of a stereotypical Normal type, having tons of strong offtype coverage, but no stats to back it up. However, this standard was changed this generation in Exploud's case, as although Exploud still has pretty low stats, it gained a powerful new tool in the move Boomburst. Being a 140 base power Normal move, this has given Exploud a chance to shine, even in higher tiers considering the sheer power of the move itself. Combining this with Exploud's immense movepool, it has an easy time plowing through many of the threats in any tier. Although Exploud probably won't ever be an outstanding contender (unless it gets a very good Mega Evolution), it can still hold its own throughout much of competitive Pokemon.
Positives
+ Its Hidden Ability, added in Generation V, really gave it a boost. Hitting Ghost-types, especially in this age of Mega Gengar is fantastic.
+ Following from that, the inclusion of the latest sound move, Boomburst, means that Exploud is great
+ It has top HP and passable defences which give it decent bulk
+ It has a fantastic movepool

Negatives
- Even though it has a wide movepool, its Attack and Special Attack stats are just barely adequate
- It is rather slow

Soundproof: Exploud is unaffected by sound moves. Not particularly useful in comparison to its other ability, so unless you want to protect yourself from other Explouds, don't use it
Hidden Ability (Available):
Scrappy: Allows the Pokémon to hit Ghost-type Pokémon with Normal-type and Fighting-type moves. This, combined with Boomburst, is extraordinary, allowing you to hit everything for neutral damage outside of Rock and Steel types. And that's just with one move.

This is Exploud's staple set, and you'll only see variations of this at the very most. But something guaranteed will be Boomburst. Boomburst is an amazing STAB, hitting pretty much everything ever (thanks to Scrappy) for immense damage. Fire Blast and Overheat take care of Steel types, and in lower tiers hits Soundproof Abomasnow. Fire Blast is the weaker option, but doesn't require you to switch out afterwards. Focus Blast takes care of Rock types and Steels once again. The last option is pretty open since the first three moves pretty much cover everything, with Surf being a more reliable way to hit Rocks than Focus Blast, as well as giving some more coverage, while Flamethrower is yet another option for Fire coverage, being the least powerful of the three but the most accurate and has no drawbacks. EVs and Nature will hardly ever deviate from these, although someone might put in 252 HP > 252 Speed just for the sake of having bulk, as well as that Exploud's Speed isn't too great to begin with. Modest Nature is to ensure maximum possible destruction with Boomburst. The choice for items is usually down to either Choice Specs, or whether you're running Exploud on a Baton Pass team, in which case you'd give it Life Orb (and even then, you could still use Choice Specs and just spam Boomburst).

Blizzard, Extrasensory, Ice Beam, Shadow Ball, Shock Wave, Sleep Talk, Substitute
Blizzard is another coverage option, being similar to Fire Blast but less accurate, and providing super effective coverage on Flying types, which none of his other particularly good moves does.
Extrasensory is an option for a Psychic move if you'd like to use it, Exploud doesn't really find it too necessary since all the Pokemon it hits usually take more damage from Boomburst.
Ice Beam is the weaker but more accurate alternative to Blizzard, not too much else to say.
Shadow Ball gives Exploud super effective coverage on Ghost types, which can be useful in certain circumstances, such as Soundproof Mr. Mime.
Shock Wave, although weak, is Exploud's only special Electric coverage, so if you really need to hit something with an Electric type move, then you can use this. Woo.
Sleep Talk allows Exploud to be able to absorb Sleep inducing moves and still be able to throw around powerful attacks.
Substitute is decent on the Life Orb set, allowing Exploud to avoid status while firing off Boombursts with abandon.

One great way to breathe new life into an older and overshadowed Pokemon is to give it new moves to use come the turn of a Generation. It worked very well for Scizor when it got Bullet Punch, will Boomburst save Exploud from obscurity?

Sure, Chatot has the strongest STAB Boomburst, but Exploud has Scrappy, meaning Ghosts can't switch in safely putting the opponent under some heavy pressure. Very much worth being lower in SAtk by ONE POINT.

Basically, click Boomburst until Exploud passes out, but there are other moves Exploud can use to cover those pesky resists. The fire move here is up to preference, but it's to hit steels harder. Focus Blast is for the opponents who think Assault Vest T-Tar stands a chance.

And Shadow Ball is to hit Mr. Mime, because otherwise...

Exploud needs a team built around it, as in its partners need to be Soundproof or they're going to take damage from Boomburst. Mr. Mime isn't a bad choice, as it offers Fake Out support and can even set up Trick Room so the the Slower Exploud can move first with Boomburst.

So did Exploud get the Scizor treatment? Not quite. Exploud is still obscure, but it IS seeing play competitively on occasion this generation which is a lot more than what could be said about it last generation. Boomburst teams seem really powerful and fun to use, but going "auto pilot, click the win button" hyper offensive in Doubles/Triples doesn't net too many successes on its own. Feel free to experiment!

To be perfectly honest, there isn't much that really does truly counter Exploud. Boomburst just tears through things so easily, even walls like Blissey get 3HKO'd by Boomburst alone. Good revenge killers of Exploud are any faster Fighting types (Hitmonlee, Cobalion, etc), or Scarfed ones like Emboar. Exploud doesn't have the best Defenses, so just wearing it down also helps, through hazards or status. Steel types like Registeel, Bronzong, and Doublade have a decent chance of taking some hits if they don't come in on Focus Blast or one of Exploud's assorted Fire moves. Assault Vest Slowking and Cresselia can also do well in the right situations. 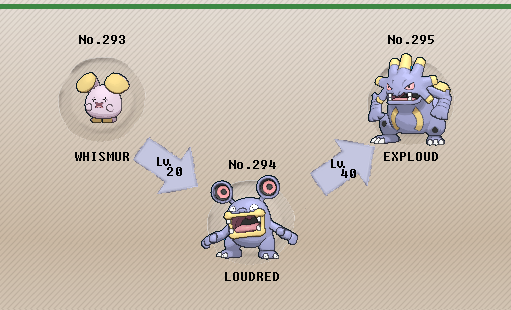