Carbink, The Jewel Pokťmon. Born from the temperatures and pressures deep underground, it fires beams from the stone in its head. It has slept underground for hundreds of millions of years since its birth. It's occasionally found during the excavation of caves.

Carbink is an interesting Pokťmon. It has a ridiculous amount of defences, although not up there with Shuckle, and has a decent movepool. This Pokťmon is not one you should use to attack, but rather on you should use as support. If you want to run a mixed attack and support one, then you may as well just use Diancie if you can, since that doubles both its attack stats. However, as Diancie is banned in official formats, you're a bit stuck with Carbink, but this is by no means a bad thing. Carbink is an amazing support
Positives
+ Its defences are astounding with a base 150 in each, making it very bulky
+ Its support movepool is fantastic. It can Stealth Rock, set up screens and Trick Room with very little concern that it will be defeated in one hit.
+ Aside from one huge 4* weakness, it has a great typing.

Negatives
- Due to its typing, Bullet Punch on strong Pokťmon will wreck it
- It can't really attack that well. 50/50 Attack stats are not passable
- Its bulk is hindered somewhat by base 50 Hit Points.
- It has really low Speed, which means it will almost certainly be taking a hit before - Outclassed by Diancie

Clear Body: Opponentsí moves which lower this Pokťmonís stats have no effect. However this Pokťmon may lower its own stats with its own moves. - A decent enough ability on most Pokťmon, and prevents opponents from lowering its stats. However, most moves you'll find that do that don't affect Carbink in any damaging way.
Hidden Ability (Available):
Sturdy:The Pokťmon will remain with 1 HP if it was going to be knocked out by a move when at full Hit Points, and it is immune to One Kit KO moves. - You're going to be using Carbink for set up, and this all but guarantees that Carbink will survive to at least make one, Mold Breaker not-withstanding

On the Carbink of Survival

This is the standard set you'll be wanting to run on Carbink. Reflect and Light Screen are core here, and if you choose to use Light Clay, they are prelonged. These will respectively boost the Defense and Special Defense of your Pokťmon for the duration. Not only is this useful for any future Pokťmon, this can even allow for Carbink to be even more brutal and tough to take down. Next, you can use Carbink to set up Stealth Rock, which is always handy, or you could go with the Trick Room choice, if your team is set up for it. Next, Toxic can slowly jab at your opponents, though it won't affect the Pokťmon Carbink is mostly afraid of (Steel-types), but you're not going to be crazy enough to keep it out against one of them. Safeguard can provide the third of the screens, protecting your team from status afflictions while Moonblast is an option to prevent you from being screwed over by Taunt.

Ok, now let's say that you're crazy and want to run Carbink as an attacker. Yeah, there are better, far better, options to do this but with a bit of set-up, of which Carbink is fully capable, you can make Carbink a bit of a force to be reckoned with. The key to this set is Calm Mind. If you can get off a couple of Calm Minds, then Carbink suddenly becomes usable. Moonblast is the decent Fairy-type move for Carbink. It's powerful, has STAB, and can lower the opponent's Special Attack. Power Gem and Ancient Power are two Rock-type moves, again with STAB. Power Gem is more powerful, but with Ancient Power, there's a 10% chance that all your stats will be raised by one level. It may be worth the risk. The final slot can be taken by others for coverage. Psychic is always handy, Explosion is good for a last ditch attempt to do damage and Trick Room can turn the tables on the opponent and potentially allow Carbink to hit first.

Clear Body, Flail, Sharpen, Rest/Sleep Talk, Rock Slide, Stone Edge, Substitue
Clear Body can be a good choice if you're going for an offensive Carbink, especially physical, as it prevents your stats being lowered
Flail can be good if running a physical set with Sturdy.
Gyro Ball is a decent enough move, considering Carbink's Speed, but is too dependant upon the opponent being much faster than Carbink.
Rest/Sleep Talk is a decent combination to use, or just Rest on its own. It is unfortunately the only way to heal Carbink, so you need to be careful while using this.
Rock Slide, Rock Tomb & Stone Edge give decent physical Rock-type alternatives, but really if you go physical, you're just asking to be susceptable to Intimidate. Rock Tomb lowers the opponent's Speed, too, which is always helpful
Sharpen can be used if you're going to go for a Physical set, to boost its Attack to acceptable levels.
Substitute goes without saying, really. With its defences, the substitute could last a while, and allow for Carbink to fully set up what it needs to set up.

Insanely high defense stats, decent support movepool and Sturdy to boot! If I'm looking for a defensive support Pokemon I should look no further than Carbink right? Wrong. Wrong. Wrong. Don't do it. Despite the base 150 Defenses, Carbink has a pitiful base 50 HP, meaning it can take moderately strong hits rather than insanely strong hits (like Lugia or Altered Giratina). Base 50 speed means it isn't going to get Safeguard up before Smeargle fires off a Dark Void, and base 50 offenses means that even if it IS 3koed at best by the opponent, what will Carbink do to threaten the opponent? Sure Power Gem might OHKO Talonflame and some Mega Charizard Y, but Mega Charizard Y threatens Carbink more so with Solarbeam - which brings me to Carbink's rather odd typing that does it close to no favors defensively, despite being a defensively built Pokemon. Being Rock AND Fairy leaves Carbink x4 weak to Steel type moves in a metagame where Aegislash is used as much as, if not more than, Mega Kangaskhan. Though it isn't just Aegislash giving it problems, Pokemon who just happen to be part Steel will wall Carbink. Why use Carbink at all? To be honest, I'm very hard pressed to find any sort of convincing reason to use Carbink over a decent supporter like Klefki, Liepard, or Male Meowstic. But if you insist....

Carbink's ability is negligible because not too many attacks will OHKO it immediately, but a double or triple target will break Sturdy, and Clear Body means Intimidate won't interfere with Rock Slides, but the damage is underwhelming no matter which way one looks at it. Skill Swap is a fun attack, if it's used correctly, it can turn one Intimidate into two Intimidates, it can reset the weather in your favor, it can disable your opponent's abilities possibly crippling them while at the same time enabling Carbink's partner to pull extraordinary feats. Imagine giving Parental Bond to Pokemon like Scarf Hydreigon, now that Dark Pulse is hitting 50% harder AND giving the opponent a 36% chance to flinch. But that's only if your opponent lets you pull off such an extraordinary maneuver. Trick Room is Carbink's other way of helping the team out, stack Trick Room and Skill Swap and the opponent more often than not will find themselves in a very awkward position. Rock Slide is to be used with Trick Room primarily for the flinch chance. It does get STAB but the damage will more than likely be negligible. The last move is your Fairy STAB, Trick Room will allow Carbink to outspeed the speedy Dragons and deal nice damage to them. Actually, if Salamence isn't carrying Hydro Pump, Carbink can be a semi solid counter to it. The Rocky Helmet is to punish physical contact, mostly Fake Out though.

Carbink was built to support, but who enjoy's Carbink's support the most? Intimidate Scrafty comes to mind, being slow and offering Carbink the chance to Intimidate multiple times with Skill Swap, any weather inducer will appreciate the weather insurance Carbink provides, but Mega Abomasnow appreciates the Trick Room support as well combined making a "Hail Room" offensive front that many players will find difficult to combat... that is unless your opponent brought Scizor, who's Bullet Punch could care less about who is SUPPOSED to go first, and Aegislash again, who resists everything the two could throw at it and return with a strong 1-2HKO with Flash Cannon.

Maybe things would be a little different for Carbink if it had decent attacking stats, an exclusive Rock type move that hits everything on the field with a 50% chance to increase physical defense and the option to Mega Evolve. Then it might see some use on a Sandstorm team or something. The future might not be so bleak for Carbink after all. But then again, Scizor and Aegislash are just about on every team nowadays.

While Carbink has decent bulk in form of its defences, its Hit Points are low so hits can still be devastating. Your best bet here is a Bullet Puncher such as Scizor, Mega Scizor or Metagross. These, thanks to a 4* weakness, can do drastic damage to Carbink. All Steel-type moves work in a similar manner too, so Pokťmon like Aegislash with Flash Cannon would do wonders. Alternatively, you should go for options that chip away at the Hit Points such as through Poison, Burn or Leech Seed. Taunt is also a great way to completely ruin a Carbink, so be sure to have a Taunter on your squad. Alternatively, just hit it continually with Grass, Ground & Water-type moves, since Carbink has little recovery. It's just a matter of time before it falls. 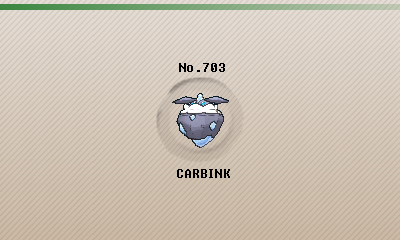