This update may be amended throughout the day so be sure to check back. If you have any ideas for the site, be sure to send them in
Since the reveal of Pokťmon Ultra Sun & Ultra Moon, the Chatroom & Discord Chat has been rife with discussion while the WiFi Chatroom has been a place for battles & trades, so be sure to visit them. Our Forums have also had these discussion and are a bustling trade and competitive section for the games. Be sure to like our FaceBook Page.
Last Update: 17:48 BST
Edit @ 17:48: Pokťmon GO - Halloween Event 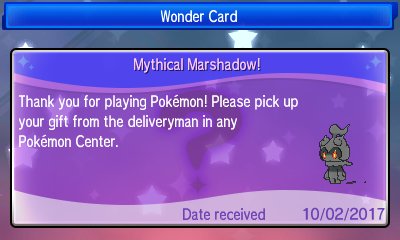 The Marshadow event has begun in multiple European countries. At present, it is available at Gamestop in Germany & Italy, GAME (Nintendo Zone) in Spain, Intertoys in The Netherlands, and Belgium and GameMania in The Netherlands & Belgium, as well as Cora, Smartoys & FNAC (Nintendo Zone) in Belgium with codes being available until November 16th. We are currently awaiting further European distribution details so keep checking back. For full details on this Pokťmon, be sure to check our Pokťdex page for Marshadow

The Pokťmon Company International have confirmed that there is to be a special event held in Pokťmon GO to coincide with Halloween. At present there are no further details for this event but we will post when any come so be sure to keep checking back.