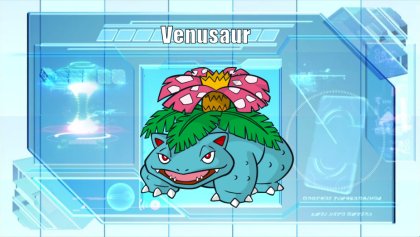 Venusaur, The Seed Pokémon. Its plant blooms when it is absorbing solar energy. It stays on the move to seek sunlight. A bewitching aroma wafts from its flower. The fragrance becalms those engaged in a battle. In battle, this Pokémon swings around two thick vines. If these vines slammed into a 10-story building, they could easily topple it. Huge amounts of pollen burst from it with the force of a volcanic eruption. Breathing in too much of the pollen can cause fainting.

Venusaur has reprised its role as the most successful Kanto starter in Generation 8 with the generational shift being very kind to it. Key move additions in Earth Power and Weather Ball make Venusaur near impossible to wall and the Special Attack boosting STAB Max Ooze alongside a vicious damage over time Gigantamax form alongside Growth and Sleep Powder make Venusaur hands down the best Chlorophyll sweeper in the game.

However, like all weather-based sweepers, Venusaur lives and dies by its weather of choice. With Dynamax providing an emergency bulk boost and an easy way for many Pokémon to change the weather means keeping the Sun up is that much more difficult. Venusaur also suffers heavily from 4 Moveslot Syndrome and can never fit all the moves it would like into a single set and will always suffer from gaps in coverage. With wide coverage, an incredible boosting option and a potent shutdown, Venusaur is firmly rooted in as the king of sun and must be respected in its weather of choice.
Positives
With Grass, Poison, Ground and Fire options, Venusaur has an answer for every traditional Grass type check
Incredible synergy between Chlorophyll, Growth and Weather Ball turns Venusaur an outright terror in the sun.
80/83/100 Defenses are above average and ensures that a healthy Venusaur will not fold to priority.
Sleep Powder is an amazing off switch that makes counterplay more difficult.
Negatives
82/100 Offenses are wholly unimpressive without a boost from Growth, so Venusaur needs setup to be threatening offensively.
Venusaur is heavily reliant on Sun, and while 80 Speed isn’t slow, Venusaur is far easier to outspeed and KO out of the sun.
Venusaur can never run all the coverage it wants alongside Growth and possibly Sleep Powder, so there are always gaps in its coverage.

Have a teammate setup Sun, get Venusaur in safely, use Growth and run rampant on the opposing team. Sludge Bomb is STAB of choice, hitting Grass types and Fairies hard while having a nasty Poison chance that can pick up KOs. Giga Drain provides excellent coverage and offsets chip damage from Life Orb and Entry Hazards, enabling Venusaur to threaten multiple times throughout a match. Last move is up to preference. Earth Power hits all Grounded Steel and Fire types who can normally stymie a Venusaur sweep, especially Heatran. However, Sunny Day Weather Ball roasts Corviknight, Celesteela, Scizor and Ferrothorn who otherwise can hold off Venusaur.

DYNAMAX:
Venusaur greatly enjoys Dynamaxing, having a healthy HP stat to remain sufficiently bulky while Dynamaxed. STAB Max Ooze is the big draw here, enabling Venusaur to further snowball while providing offensive pressure, while Max Quake makes for an offensive pseudo Calm Mind. Whether you want to Dynamax or Gigantamax is up to personal preference. Max Overgrowth provides a boost to Grass STABs, passive recovery and protection against Earthquake. Max Vine Lash causes a persistent damage over time effect that can help reach OHKOs normally out of reach.

EVs and Items:
Standard Sweeper Spread for maximum destruction under the sun. Modest is near mandatory due to Venusaur’s middling Special Attack, though Timid is worth consideration for outspeeding Scarf Katana and Latios in the Sun. Life Orb for extra damage.

Other Options:
Earth Power + Weather Ball – It is possible to drop one of Venusaur’s STABs for both coverage moves, though both Sludge Bomb and Giga Drain have very good benefits in their own right.
Solar Beam/Energy Ball -both offer far more power than Giga Drain, but leave Venusaur to be incredibly vulnerable to being worn down and Solar Beam makes Venusaur setup fodder for any weather disruption
Sleep Powder -Shuts down any non Grass check your opponent has (and Grass types don’t want to switch into Venusaur), but the accuracy can be iffy and giving up coverage for it hurts a lot.
Sunny Day -enables Venusaur to setup its own sun, but Venusaur is strapped for moves as it is

Partners:
Torkoal and Kantonian Ninetales are far and away the best options, being able to seamlessly setup Sunny Day, while proving to be great pivots into the Ice and Fire attacks Venusaur hates, as well as dealing with Flying Steel types like Corviknight if Venusaur is not running Weather Ball. Groudon provides a similar function, slaughtering opposing Steel and Fire types thanks to its Ground STAB while setting up Sun. Dark types cover Venusaur’s Psychic weakness and can attract Fairy moves that are easy switch ins for Venusaur. Hydreigon, and Umbreon stand out at this role -the former for its myriad of resistances and ability to abuse Sun with fire Coverage, while Umbreon enjoys Sun Boosted Moonlights and opens Growth opportunities with Snarl and Yawn. Incineroar excels at both.

Physical Sunny Day Venusaur. At +2, even Base 82 Attack starts to hurt, making it a great surprise option against dedicated sponges like Chansey and Umbreon. Growth in the Sun buffs both Attack and Special Attack, so you can use it to bluff the standard sweeping set before going for the shock factor with STAB Seed Bomb. Earthquake provides valuable anti Steel and Fire coverage, while Knock Off is a coverage option not available to Special Venusaur, providing item disruption against the Flying types that normally come in to check Venusaur and an answer to non Fairy Psychic types.

DYNAMAX:
This set is not recommended to Dynamax or Gigantamax. While many of the same benefits are here, the main issue is that Physical Venusaur cannot snowball unlike Special Venusaur's STAB Max Ooze and thus Dynamaxing is best left to an actual Dynamax sweeper.

EVs and Items:
Standard Sweeper Spread for maximum destruction under the sun. Adamant is near mandatory due to Venusaur's below average Attack, though Lonely or Naughty could be considered if running mixed sets. Life Orb for extra power.

Other Options:
Special Attacks -This Venusaur can run a mixed set, since its invested Attack is near its uninvested Special Attack, so any move mentioned on the special set is worth consideration.
Sleep Powder -Shuts down any non Grass check your opponent has, but the accuracy can be iffy. More viable her, as Venusaur will probably want multiple Growths.

Partners:
Torkoal and Kantonian Ninetales are far and away the best options, being able to seamlessly setup Sunny Day, while proving to be great pivots into the Ice and Fire attacks Venusaur hates, as well as dealing with Flying Steel types like Corviknight. Fire type Sunny Day abusers like Charizard and Chandelure make fantastic partners, able to melt opposing Steel Grass and Bug types while being a reliable pivot into the boosted Fire moves flying about and taking pressure off of the team's Sunny Day setter from having to come in. Teleport pivots like Chansey, Clefable and Slowbro give Venusaur a way to come in safely for Growth setup and often attract types that Venusaur resists.

Weather has always been stronger in doubles formats and the same holds true for its abusers. As the king of Chlorophyll, Venusaur has remained a consistent threat whenever it and sun teams were available. Venusaur’s typing makes it a reliable answer to many popular Pokémon like Urshifu-Rapid, Regieleki, Rillaboom, and Amoongus. Sleep Powder is just as powerful in Doubles as it is in Singles and combined with the ability to ignore Rage Powder gives Venusaur ample opportunity to shutdown setup before it starts. However, it remains as reliant on the weather remaining in its favor as ever and its weaknesses can make switching in safely a difficult task and has no answers for priority and must rely on teammate support to get the most out of it.

A powerful Gigantamax or standalone option, Venusaur provides great offense and support to Sun teams. Have a teammate setup sun and Venusaur can start shutting down the competition with blisteringly fast Sleep Powders. Or go straight for the Gigantamax where it can start ramping up the team’s Special Atack with Sludge Bomb or put the opposing team on an even shorter timer with G-Max Vine Lash. Earth Power rounds out coverage, hitting many popular Pokémon like Zacian, Incineroar, Entei and Stakataka.

Other Options & Team Ideas:
Frenzy Plant -Venusaur’s strongest option for a G-Max Vine Lash and does not care about weather changes, though the recharge turn can be fatal.
Protect -Doubles Battle staple. Stall out Tailwind and Trick Room, scout for moves, punish focus fire. Protect is a staple for good reason.
Growth -punishes Protect or Ignoring Venusaur, but with a partner on the field contributing damage Venusaur’s power woes are not as apparent
Sun Setters (Groudon, Torkoal, Kantonian Ninetales) are mandatory for Venusaur’s effectiveness and in turn provide coverage Venusaur can’t afford to take. Indeedee and Tapu Lele setup Psychic Terrain which blocks Prankster Taunts and Fake Outs deigned to shut Venusaur down before it can start.
.

Venusaur is very similar to Exeggutor in many ways. It has many ways to check it, especially outside of Sun, but everything must be wary of Sleep Powder shutting down would be checks and counters. However, Venusaur struggles to fit Sleep Powder on most of its sets and sacrifices valuable coverage to do so.

If ignoring Sleep Powder, Weather Disruption is a great way to stop Venusaur before it starts. While few weather setters want to risk switching into Venusaur and risk eating a super effective attack, if given a free switch, Pelipper and Alolan Ninetales can stop Venusaur in its tracks and force it out. Otherwise, stomaching a hit by Dynamaxing and forcefully changing the weather with Max Geyser, Rockfall or Hailstorm is a great way to stop a Venusaur sweep in its tracks.

Bulletproof Kommo-o is the closest Venusaur has to a check, as it walls any set lacking Sleep Powder and requires multiple Growth Boosts to muscle through. Chansey performs similarly well, but must watch for a surprise Physical set.

Otherwise, depending on its coverage, Venusaur will have blind spots it can’t manage. If lacking Earth Power, Heatran soundly takes any of Venusaur’s other moves and can easily OHKO back. If lacking Weather Ball, Corviknight, Celesteela and Skarmory all solidly wall Venusaur and can OHKO with their Flying STABs. On sets lacking Sludge Bomb, Fire Flying types like Moltres give Venuaur a lot of difficulty.

Otherwise priority is the best way to deal with a Venusaur in the sun. While Venusaur’s natural bulk will block most OHKOs from full health, between vulnerability to all entry hazards and common Life Orb chip damage, it is very easy for Venusaur to get warn down quickly. 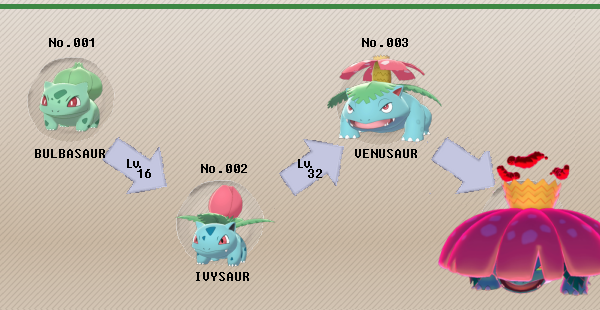