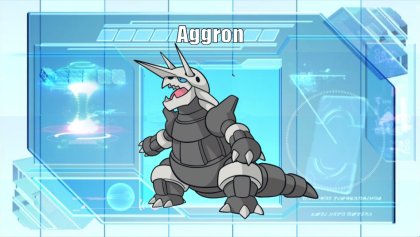 Aggron, The Iron Armor Pokémon. Aggron has a horn sharp enough to perforate thick iron sheets. It brings down its opponents by ramming into them horn first. Long ago, there was a king who wore a helmet meant to resemble the head of an Aggron. He was trying to channel the Pokémon’s strength.

Aggron’s return in the Crown Tundra was buried amidst all the returning legendaries and for good reason. Aggron losing its Mega Evolution leaves it shackled to its utter horrid typing which compromises the competitive physical tank niche it shares with all the other Rock and Steel types. It is hard to be a physical wall when your typing has such huge achilles heels against the two of the most common physical coverage types in the game and no reliable recovery.

What Aggron does have to differentiate itself from the competition is power. Base 110 Attack is decent, but it gets taken to ludicrous heights with Rock Head Head Smash, as a base 150 STAB move with no drawbacks is nothing to scoff at. Wide physical coverage ensures Aggron isn’t dead in the water without Head Smash and can threaten many targets. Poor speed and easily compromised bulk hold Aggron back, from sweeping to its hearts content. It takes a deft hand to balance Aggron’s flaws and strengths, but it can prove to be a terrifying force.
Positives
STAB Rock Head Head Smash is insanely powerful and can even rip through Pokémon otherwise known for their tanking prowess or resists.
Base 180 Defense, with decent HP and numerous (9!) resists gives Aggron many opportunities to switch in on a game to game basis
Impressive movepool gives Aggron numerous boosting, offensive and support options
Negatives
4x weaknesses to Ground and Fighting on top of a common Water weakness compromises Aggron’s physical walling capabilities
Below Average Special Defense gives Aggron yet another weakness to exploit
Poor Speed often forces Aggron to take a hit before dishing one back.
Exposed to all entry hazards, Burns and lack of reliable recovery makes Aggron easy to wear down.

Surprise Aggron speedy sweeper set. Using Aggron’s great defenses, you pivot into something that it walls easily and then while your opponent switches out, you use Autonomize speed up Aggron to truly frightening levels before Head Smashing everything in sight. Earthquake provides impressive coverage. Body Press rounds out the set, having great coverage, running off Aggron’s still higher Defense and the few Steel types that don’t mind Body Press tend to be hit hard by Head Smash and Earthquake regardless.

EVs and Items:
Standard Sweeper distribution to maximize Speed and Attack for the most damage. Jolly Nature is recommended to get as much speed as possible, even outspeeding Timid Max Speed Dragapult after an Automatize. However, the drop in Power is noticeable, and you can utilize Adamant instead, and would still be able to outspeed the unboosted game up to base 130 Speed. Weakness Policy works well when Dynamaxing, but Aggron’s few (albeit common) weaknesses can make it difficult to get a boost. Lum Berry can help protect against Burns or Paralysis attempts, while Life Orb can ratchet up the damage further at the cost of durability.

Other Options:
Rock Polish -Nearly the same as Autonomize, but Autonomize is preferred as it guards against Low Kick and Grass Knot, two moves that otherwise greatly trouble Aggron. A must if you are running Heavy Slam
Heavy Slam/Iron Head -Steel STAB moves. Heavy Slam can have higher power, but is inconsistent and many of Aggron’s favorite Steel weak targets are heavier than it. Iron Head and its Flinch chance pair well with the speedy Aggron but the power loss is significant.
Aqua Tail -hits Palossand and Claydol who otherwise wall Aggron hard

Partners:
Tapu Bulu and Rillaboom instantly stand out for their ability to setup Grassy Terrain, weakening Earthquake and providing Aggron some badly needed recovery, while acting as a pivot into Water and Ground attacks (and Fighting attacks in the case of Tapu Bulu)
Claydol is an excellent pivot into Ground and Fighting moves, provides excellent hazard control and acts as a reliable slow pivot with Teleport.
Araquanid resists all of Aggron’s weaknesses, can remove opposing Ground and Rock types with its Water STAB while setting up Sticky Web to make Aggron that much harder to outspeed.

Tanking Aggron set looking to get the most out of its bulk while grinding the opponent down with Entry Hazards and its workable base Attack. Aggron makes for a fantastic Stealth Rock user as very few Defoggers want to risk coming in and eat a STAB Head Smash, which does absurd amounts of damage even uninvested. Body Press, despite lacking STAB, does appreciable damage off Aggron’s impressive Defense, while Heavy Slam is an accurate secondary STAB.

DYNAMAX:
This set can enjoy Dynamaxing, to escalate defensively while addressing the reliability issues in Aggron’s STABs to turn Aggron into a defensive bulwark. Head Smash empowered Max Rockfall has the same base power, perfect accuracy, and sets up Sandstorm to pile on the passive damage and patch up Aggron’s Special Defense. Heavy Slam has its power fixed and hits opposing Dynamax users as the reliable Max Steelstrike while ensuring Aggron is nigh unbreakable on the physical side. Body Press loses a lot of power going into Max Knuckle, but enables Aggron to start ramping up offensively as well.

EVs and Items:
EVs and Nature are to max out Aggron’s decent HP and below average Special Defense to make it as bulky as possible on both ends of the spectrum. Leftovers is the main reliable recovery that Aggron has and is essential in keeping it up through extended bouts.

Other Options:
Protect -punishes Hi Jump Kick, and stalls out for Leftovers healing
Roar -counters predicted switch ins and racks up Entry Hazard damage
Curse -While this does seem like a good idea, increasing Aggron’s strong points, even with investment, Aggron is still vulnerable to special attackers, has no protection against status and no reliable recovery without Leftovers, so it can be worn down rather quickly and requires a lot more intensive team support.

Partners:
Tapu Bulu and Rillaboom instantly stand out for their ability to setup Grassy Terrain, weakening Earthquake and providing Aggron some badly needed recovery, while acting as a pivot into Water and Ground attacks (and Fighting attacks in the case of Tapu Bulu) Claydol is an excellent pivot into Ground and Fighting moves, provides excellent hazard control and acts as a reliable slow pivot with Teleport. Vaporeon and Clefable can pivot into Water and Fighting moves respectively and pass Wishes to keep Aggron healthy.

Most Pokémon with a STAB Fightiing or Ground move can make quick work of Aggron thanks to the quadruple weakness and resistance to Head Smash. Palossand and Claydol whose Special offense easily cleaves Aggron while taking pittance from even Choice Banded sets lacking Aqua Tail are very close to an Aggron counter. Scrafty and Hitmontop stand out with Intimidate, Hippowdon and Sandaconda with their massive Defense and the former’s reliable recovery also make decent answers.

Burning Aggron goes a long way to reduce its threat level. Aggron will always be running physical attacks, and lacks reliable recovery, so Burning it tends to be a death knell for what it can do during a match.

Revenge killing Aggron is rather reliable, if less than ideal due to having to lose a Pokémon as Aggron’s slow speed and lackluster special defense make it a vulnerable target to most special sweepers. 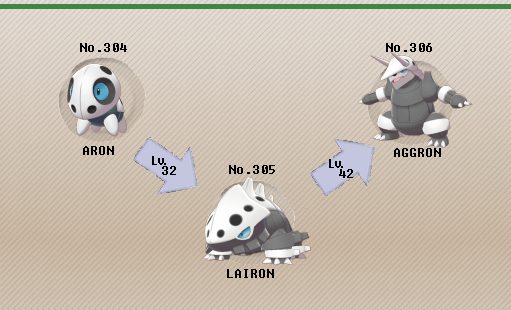