Team Snatch, an evil Organisation in the Oore Region that are basically just robbers of Oore:

They steal Pokémon using a Snatch Machine, which you do steal from Team Snatch...however they have many...even bigger ones so you need to stop them. Their Headquarters in the Ekuro Canyon is destroyed by you forcing them to have to go into hiding...however they hold this dark secret. This contains spoilers so dont scroll beyond the picture if you do not want to know 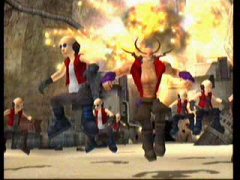